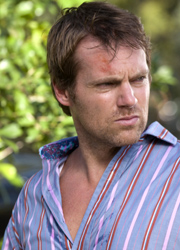 In Thursday night’s new episode, “Truth and Reconciliation,” according to TV Guide, Michael (Jeffrey Donovan) “helps a Haitian man locate his daughter’s killer, a corrupt government official from Haiti who’s hiding out in Miami. Elsewhere, Michael makes progress while investigating who tried to kill him.”

Shanks will appear in the next three episodes, according to Michael Shanks Online, including February 26‘s “Sins of Omission” and March 5‘s “Lesser Evil.”

Shanks first appeared on the show in last year’s episode “Bad Blood” (story). His character is an experienced spy who is a wild card, not afraid to get his hands dirty to get done what he thinks needs to be done.

Head over to Michael Shanks Online to find high-res photos of Shanks in the upcoming episodes. Burn Notice airs Thursday, February 19 at 10 p.m. (9 Central) on USA in the United States.

I am really enjoying watching this show, looking forward to seeing him back as Victor this Thursday! and in the other upcoming episodes.

Note: I think MSOL mentioned that he appears briefly in this one and much more in the next too. :)

Cool! Only had season 1 so far in the UK and am looking forward to season 2, especially after hearing about Michael appearing in it.

Really glad to see Michael doing some quality work. Did not ‘get’ his role in Mega Snake. Given that some actors and directors work well together and that a good story told comes from a good story written and other such events that come into play in a scene when liking or disliking an actors work, I meant no disrespect. He really was Daniel Jackson, he should be still.

He was great earlier in the season. I’m really looking forward to seeing him play Victor again. I’ve enjoyed all his work, myself. He’s always good, even if the movie/show isn’t. (I believe that Megasnake was all about the Greencard. ;) )
I wish we got to see him a whole lot more often as Daniel, as well, but I’m sure that he’s enjoying the chance to play other characters, and I’m really looking forward to Rage of Angels.

If you missed it, don’t worry. You didn’t miss much. MS’s appearance tonight amounted to nothing more than a cameo, though it was very amusing.

Great re-introduction of Victor to the penultimate episode of current season.

As metioned before he only appears briefly in this episode, but much more in the next two final episode of the series.

You could be right amconway, greencard would be the next logical step. I’m sure from his point of view, being an actor on a hit show for 10 years tends to confine you and there is a need to spread your wings and try something new. It must be daunting though moving from what must have felt like a family set and job security to not knowing what to do next or what you should be doing next. I quess he knows the fans will always welcome him back to Stargate. I will be sure to watch Burn Notice. Season… Read more »

Yes, season two. This Thursday and next are the last episodes of the season, and from everything that I’ve heard, he will play a major part in both of them. He’s doing a very amusing turn as a seemingly crazy ex-spy.

Wow! How ’bout that finale, huh? Won’t say anything about it here (no spoilers) except how very, very impressed I was. It was a real rollercoaster, and that scene on the boat? Well, now ‘Burn Notice’ fans know why we think so highly of Mr. Shanks’s acting skills. When he’s given that kind of material, and his fellow actor is as good as Jeffrey Donovan, he really shines. Absolutely wonderful from beginning to end.