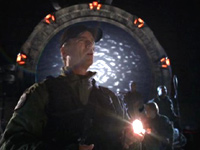 Only a few weeks after Stargate Atlantis made its debut on Hulu.com (story), Stargate SG-1 has followed suit. The entire first season of the show is available right now to watch online, for free!

Season One includes 21 episodes (with the show’s pilot, “Children of the Gods,” running two hours), including some classic episodes and fan favorites like “The Nox,” “The Torment of Tantalus,” “Solitudes,” and “There But For the Grace of God.”

Due to distribution agreements, only viewers in the U.S. can watch episodes on Hulu. Episodes include a small amount of commercials, usually 15 to 30 seconds between each episode act.

While you revisit some of your favorites from Season One on Hulu, also listen to GateWorld’s editors discuss this season in Episode #32 of the GateWorld Podcast! We’re taking a tour of Stargate history one season at a time, with the Season Two podcast set to debut on Tuesday, March 31.

Check out Hulu right now to watch. Additional seasons will be added in the weeks ahead, as Hulu plans to count down to the October premiere of Stargate Universe.

(Thanks to Morjana, Kermit, Bethany, Charles, Avi, Bryan and Harry for the tip!)

Also, these are the edited for syndication episodes as seen as SciFi Channel.

Nice!! I will be watching these

Hulu is USA. But no problem with this. I already bought all stargate episodes on dvd.

It’s the edited pilot, then? Good! So no full frontal nudity right when my mom walks in? ;) I actually haven’t even seen the pilot yet. Maybe I’ll go and watch the entire season in order for the first time…

I love Hulu! I have been enjoying SGA and look forward to re-watching seasons of SG1 that I don’t own. Also checked out Sanctuary and BG via Hulu.

Couldn’t care less, I belong to the “Rest of the World”. And also I own the DVDs.

awww I own all the DvD’s but i want to watch them online…:(

It’s ridiculous that it is only ever “US only”, what about the rest of the world ??