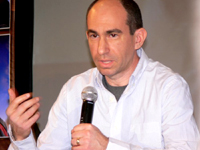 The fourth and final day of Creation Entertainment’s annual official Stargate convention brought with it news on the upcoming Stargate Universe series in a special panel with the show’s creators, along with stage appearances by two fan favorites.

First up for the day was executive producer N. John Smith. Smith talked about several Stargate projects, noting that he feels Universe is “a fabulous new concept. I can’t wait for fans to see what’s been done.”

Per Smith, the third SG-1 film has been green-lit, although the start of production could be in a state of flux (story).

“When we were shooting SG-1 and Atlantis at the same time, it was a huge strain on all involved,” Smith said. “I think, so that we are able to provide a better product, we’ll probably try to begin production on it in the fall after we wrap filming on the first season [of Universe].”

“You never know, though,” Smith continued. “There could be a little bit of overlap.”

On the convention stage next were Brad Wright and Robert C. Cooper, who stopped in as special guests at the convention to conduct a panel on Stargate Universe and answer some of the burning questions fans have about the third series.

The two also talked about thoughts behind those one-word episode titles, the upcoming Atlantis and SG-1 movies, bloopers, changes to the Atlantis leadership, how SGU is being shot, Stargate’s lack of recognition in Canada, and more. 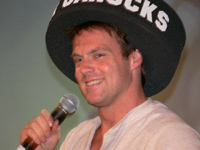 Wright also announced that the new cut of “Children of the Gods” (story) is finished and now with MGM and FOX — and when it arrives it will include an audio commentary with Wright and actor Richard Dean Anderson (“Jack O’Neill”). The film will also be dedicated to Don S. Davis (“George Hammond”), who passed away last year (story).

Convention guests were next welcomed to an appearance by convention regular Michael Shanks (“Dr. Daniel Jackson”). Within the first few minutes — and without actually saying the words — Shanks all but confirmed an appearance on Stargate Universe (story).

Shanks, who just recently completed his run on the USA Network series Burn Notice, mentioned why the character of Jackson still appeals to him after over twelve years in the role.

“I just really, really enjoy Daniel’s integrity,” Shanks said. “I love the aspect that he always stood his ground.”

Shanks also had nothing but praise for his co-stars, calling Anderson a “really funny man,” and Amanda Tapping “a big sister to three brats.”

NEXT: Amanda Tapping, and a note from Creation

Ok… so what did Cooper/Wright actually SAY about Universe?

Yeah, I wish we could have transcripts or something of the SGU panel.

thanks for the report! ;)

especially thanks for the juicy tid-bit on what amanda thinks sam and jack should be ‘doing’. :p :D

what do they mean by “changes to the Atlantis leadership”? Does it mean the main cast will not signe up for the movie. Who does not he or she participate to the movie?
If one of member of the main Atlantis Cast(Flanigan, Hewlett, Momoa or Lutrell) They will risk to jeopardize the Success. I know the title is Atlantis not the name of a character so the TPTB can kill each character but it would be a bad choice

Amanda, I hope they’ll listen to you, especialy because the third movie is more about Jack ;)

And owww, look at the Furling :D

Not much of a report in my view, since you just tease what they had to say on the SGU panel.

More to come on the SGU panel. Working on it now — stay tuned!