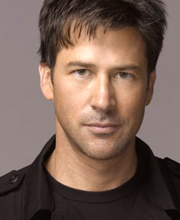 Warehouse 13 “follows two Secret Service agents who find themselves abruptly transferred to a massive, top-secret storage facility in windswept South Dakota which houses every strange artifact, mysterious relic, fantastical object and supernatural souvenir ever collected by the U.S. government,” SCI FI said. “The Warehouse’s caretaker Artie (Rubinek) charges Pete (McClintock) and Myka (Kelly) with chasing down reports of supernatural and paranormal activity in search of new objects to cache at the Warehouse, as well as helping him to control the warehouse itself.”

Flanigan will play Jeff Weaver, a handsome and wealthy man “whose charm captures Myka’s interest, but he finds himself under Pete and Myka’s scrutiny when a sculpture on which he bid, vanishes in an impossible heist.”

Check out the original report at Pop Culture Zoo, and watch a trailer for Warehouse 13 at SciFi.com. The show premieres Tuesday, July 7 with a 2-hour pilot.

(Thanks to Joseph for the tip!)

Woohoo! I wasn’t going to watch this show at all, but now I will watch at least the episode with Joe Flanigan.

FAB FAB an FAB, YEAHHHHHHHHHHHHH I’m gonna watch Joe’s eps 100% or download if we dont get it in the UK.

So “COOL” I’m now watching this, there should be a campaign to see more Joe on screen ;-)

Might be nice to see Joe in that military red suit (from the old 1980s “V” tv-show), which was stolen-and-runnin’ (^_^) by Flanigan from the Jace show. It was a [F-BOMB] hilarious.

He’s playing a handsome man? I can’t imagine why. lol

I didn’t know about this show but the premise sounds good, I may watch it, even if it’s just to admire JF.

Sounds a little like the premise of the TNT tv movies “The Librarian,” which star Noah Wylie. The library in question has a super-secret and highly guarded sub-basement with all the historic treasures from history: the Ark of the Covenant, King Arthur’s sword Excalibur, etc. Still, it might be an interesting and fun summer show to watch. Lot of fun story potential.

Ahem! Who’s Eric Cerra, from Eureka?? Do they mean ERICA Cerra, who plays Jo, the Deputy? This is the second article I’ve read that referred to this person as “Eric” Cerra. Get it right, people!!

i cant wait until this episode