As an alien with little to no familiarity with Earth culture, in the early years of SG-1 Teal’c was a primo comedic straight-man. This made for some great one-liners. But as we got to know the big man, we also learned that he has his own sense of humor … unique as it is. Here are five of our favorite jokes told by Teal’c — either accidentally or on purpose!

Thanks to both J. Pilsner and Jamie for suggesting this week’s topic!

As SG-1 returns home from its very first official off-world mission, they discuss the fact that if any benefits for Earth result from their travels to other planets, the real source will have to be kept a secret. Jack quips, “Guess I’m going to have to cancel that Oprah interview.”

Brand new to Earth, Teal’c responds stoically: “What is an Oprah?”

A solar flare has sent SG-1 back in time, to the year 1969. Dressed as a flower child and attempting to protecting his identity, Teal’c drives the hippie bus after the team hooks up with Michael and Jenny — two kids on their way to Woodstock. But Michael has been drafted, and tells Teal’c that after the concert they are thinking of crossing the border into Canada to avoid fighting.

“For what reason?” Teal’c asks.

“The war with Canada.”

Way to blend in, big guy.

SG-1 pays a return visit to the planet Cimmeria, once under Asgard protection thanks to Thor’s hammer device. Now that it’s been destroyed, the Goa’uld Heru’ur has invaded. The team sees his pyramid ships on the surface, and covertly observes squadrons of Jaffa — and the System Lord himself. The Stargate is heavily guarded, making escape impossible — so Daniel suggests that they lie low until things calm down.

Teal’c, however, is well aware of what the Jaffa will do to the Cimmerians. “Things will not calm down, Daniel Jackson. They will, in fact, calm up.”

Told In: “Message In A Bottle”

An alien device has pierced Colonel O’Neill’s shoulder, pinning him to the solid concrete of the Gate Room wall. The sentient alien organisms inside the time capsule have also begun to spread to his body. All attempts to free Jack have failed … but Teal’c refuses to leave his friend’s side.

“Undomesticated equines could not remove me,” he tells O’Neill.

The other members of SG-1 remembered this line in particular as characteristic of their friend. Jack recalled it in “Birthright,” and Sam recognized it when Teal’c used it again in the Atlantis episode “Reunion.”

To illustrate how Jaffa make fun of the helmets worn by the Jaffa in the service of Seth (Setesh), Teal’c translates a bona fide “Jaffa joke” for Jack, Sam and Daniel. After he tells it, he bursts out laughing — an uncharacteristic but hilarious glimpse at Teal’c’s personality!

NEXT WEEK ON THE FIVE: The Best of ‘Todd.’ Blog about your five favorite episodes featuring Todd the Wraith next Friday, and trackback to our post! 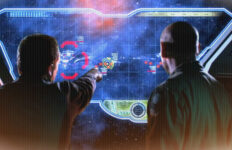 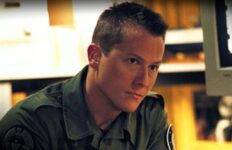 These are all great! I agree wholeheartedly!

That “calm up” phrase was funny in the hungarian translation too. I remember my eyes were running I laughed so much.

Anyway, thanks for the friday five tag. :)

What, not the “ring of jello” line? Definitely my favorite.

It’s not a funny line, but my favourite Teal’c line is from the season 6 episode ‘The Other Guys’.

Teal’c and O’neill are talking at the beginning of the episode about the Stanley Cup. Teal’c says: “I believe the Canucks of Vancouver are superior warriors.”

As a Canucks fan I love it every time I hear that line.

The ring of jello was one that leapt to mind for me as well.

aarghh! please refresh my memory.
what was this ‘ring of jello’ moment?

Totally agree. I believe the Seth joke was his first of the series at that point as well. Still funny no matter how many times I see it.

or i cant remeber what episode, but teal’c is sitting at a briefing, when a boiling pot of coffee is placed on the table, i dunno why but teal’c juts picks it up and takes a hugh chug of boiling coffee, excellent,

or window of opotunity, when he keeps getting hit by the door:),

No Way! It’s a great list, but I really can’t believe the scene with Jonas and Teal’c in Descent isn’t in there! “I mean, those of us not originally from the planet Earth have to stick together, right??” (Teal’C pointedly looks at Jonas, still with the stoic look on his face) “Are you suggesting an Alien conspiracy?” I don’t think anything Teal’c has said has made me laugh as hard as I did when I heard this. All in all, I agree that this list was probably hard to make, and all of the moments on here are truly great… Read more »

This, imo, is the funniest thing Teal’c ever said.

Teal’c: “You have been impregnated without copulation.”
Vala: “Yes, and I’m absolutely terrified. Have any of you ever heard of anything like it?”
Mitchell: “Well there’s one.”
Teal’c: “Darth Vader.”

I should have made it more clear: What we were looking for this week is specific Teal’c dialogue. That ended up excluding plenty of exchanges, moments (coffee pot, and pretty much ALL of “Urgo”), and situations (Vagina Monologues) that are hilarious in their own right.

For example: “That was not his intention” isn’t a particularly funny line of dialogue. In the context of the situation in which it is delivered in “Urgo,” however, I think it’s one of Teal’c’s funniest.

I think his joke is the best, but then again its was to sad that Tealc only had somee little lines like indeed or something in that line. I think he was worth for a lot of things more then only having some funny lines in SG-1. Anyway thanks and I always loved his character.

when Gen Hammond tries to stop Teal’c from taking his staff weapon outside of Cheyenne Mountain in Cold Lazarus,
Teal’c: I have seen your world. I will need it.

A lot of Teal’c’s funny lines really come without him actually having to say anything. a raised eyebrow here and there just at the right moment is often priceless and a good laugh,

Haha call nice. One of my favorite ones is the one where someone suggests to teal’c to have some warm milk to which he responds ‘I will not consume bovine lactose at ANY temperature’. Teal’c is lactose intolerant :)

Great topic and choices. I just saw the episode that had your #1 and it was indeed priceless.:):)

Love the list!
#4 cracks me up every time and #2 is a classic.
I have to agree with Clemontine, though. ‘Darth Vader’ is my favorite.

Love the Calm up one! the best! I still dont get the jaffa joke! seriously…

OMG! Darth Vader!!! yeah that one cracked me up good!

When Carter was talking about booby traps and Teal’c said “boobies” with a big grin on his face.

In Holiday, where we first meet Machelan there is a funny moment where Teal’c is in O’Neill’s body and visa-versa.

Teal’c: “If I am to remain in this body, I must shave my head”

Number 2 is the only one I think is actually funny.

I think that they should have added the time when he asked Daniel what deja vu meant.
Daniel: (Upon returning to a planet) “Deja vu.”
Teal’c: “I am unfamiliar with that term.”
Daniel: “It means I feel like I’ve been here before.”
Teal’c: “That is correct Daniel Jackson, yesterday when we first arrived on this planet.”
Daniel: “Right, what was I thinking.”
Has anyone ever called the joke that Teal’c told a juffa guffa?