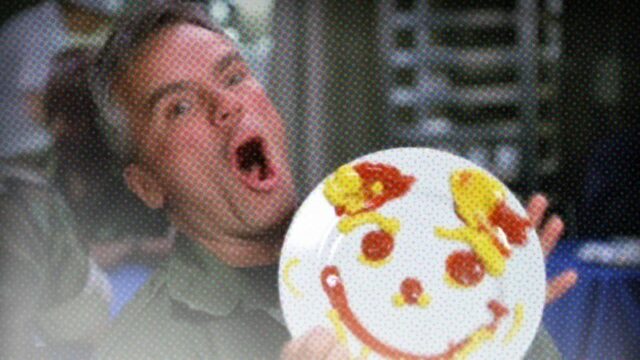 One of the things that makes Stargate SG-1 such a great show is its ability to tell lots of different stories in lots of different genres. At its core Stargate might be an action-adventure show, but it was also able to do profound character drama, the occasional horror episode … and yes, comedy.

Stargate was always funny. SG-1 couldn’t avoid it with the likes of Richard Dean Anderson at the top of the call sheet, always looking to improvise a quip or diffuse a tense situation with a joke. (“Baal, you know me … of course I dare mock you.”) And when Stargate went full comedy, it could be very, very funny!

So out of 214 episodes of Stargate SG-1, which episodes are the funniest? Which ones are so jam-packed with humor (“I love jam!”) that they end up striking sci-fi comedy gold?

Let us know which episodes tickled your funny bone, and which jokes or beats you find the funniest! Here are our picks: 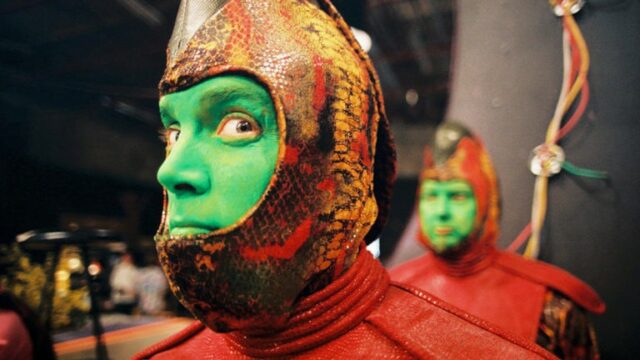 SG-1‘s landmark 100th episode gave the writers a chance to play outside the normal sandbox a little bit, turning the camera on their own production crew by spoofing themselves. Martin Lloyd (guest star Willie Garson) is an alien living on Earth, and after wiping his memory he ends up creating a television show based on his latent memory of the real Stargate program. The result is Wormhole X-Treme!, a low-budget cable show with versions of Colonel O’Neill, Major Carter, Daniel, and Teal’c that are just … off. Hilariously off.

There are loads of Easter Eggs here, of course, from Martin telling a writer to “go write something” (that’s executive producer Robert C. Cooper) to real-life director Peter DeLuise yelling for his explosions to be “BIGGER!” The production sets for the fake show are, of course, The Bridge Studios — where Stargate SG-1 filmed — and most of the crew and extras are their real-world counterparts.

Writers Joseph Mallozzi and Paul Mullie also lampoon the genre of pop sci-fi in general, with jokes about a character who is out of phase (“So how come I don’t fall through the floor?”), tripping over the bodies of an army of dead aliens, and more. Stargate’s first attempt at a comedic episode made for an unusual outing, but a real success. 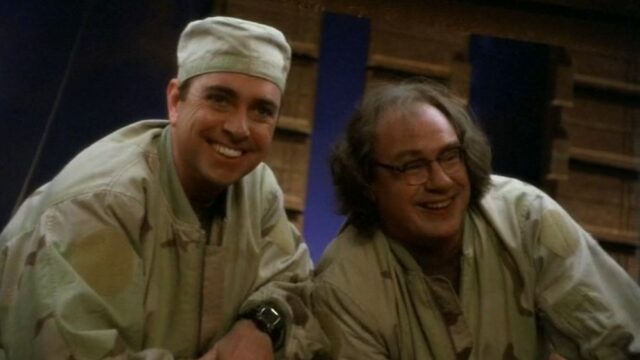 In Season Six the show’s writers decided to do Stargate’s version of a “Lower Decks” episode, focused not on SG-1 but on the random scientists who work on those science projects in the background. This was another chance for an offbeat episode full of laughs, and everything depends on the guest stars to be cast.

If you’re a Canadian show making a funny episode that features its guest star instead of the main cast, of course you’re going to cast a legend of Canadian comedy. In the role of Jay Felger they cast Patrick McKenna (The Red Green Show), and for his nerdy sidekick Simon Coombs it was Star Trek: Enterprise actor John Billingsley. The two are hilarious together, and their goofiness really sell the premise of the episode. Felger is a total SG-1 fanboy, and Coombs criticizes his day-dreaming friend for not “worshiping at the altar of Roddenberry!”

Unlike most of the rest of this list, I’d say that “The Other Guys” is situationally funny. The humor here doesn’t come from lots of jokes, or Teal’c getting hit in the face with a door, or Jack O’Neill mocking the villains (though he does that, too). It comes from the characters of Felger and Coombs, and from the awkward situation they put themselves in: wandering around a Goa’uld ship trying to rescue a captured SG-1 … only to find out that the team allowed themselves to be captured because they’re on a mission. 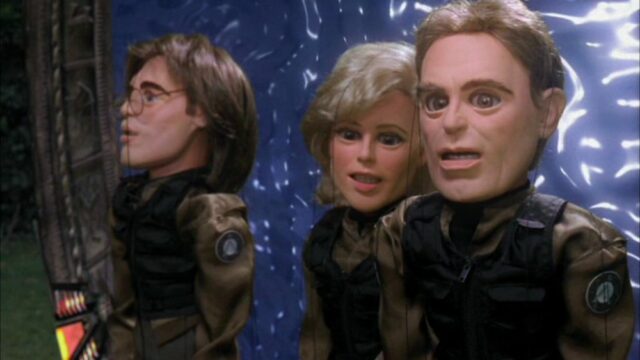 Very few shows make it to 100 episodes, let alone double that number — so we were more than ready for another wacky, out-of-the-box outing for the cast and crew. Season Ten’s “200” delivered in spades, and instantly becoming a fan favorite. Even casual viewers and newcomers often point to this episode as amazingly entertaining thanks to how crazy it is.

The germ of an idea for this episode came from The Simpsons, which every Halloween does a “Treehouse of Horrors” collection of zany vignettes. There are basically no rules here — you can do aliens, time travel, kill off a main character, whatever. So what happens when Stargate does “Treehouse of Horror” … and lets every single writer on the staff contribute ideas?

On screen, “200” feels like the same fever dream brainstorming session that it probably was behind the scenes. Martin Lloyd is back, gathering SG-1 around the conference table to give feedback on the script for a big Wormhole X-Treme! movie. In between calling out more sci-fi tropes and poking fun at themselves, the SG-1 team makes pitch after pitch — which lets us see our favorite characters in wildly outrageous scenarios.

Which one of these is your favorite? Is it the Star Trek scene, with Mitchell in command on the bridge of the Odyssey? Maybe the Farscape spoof, with Thor himself putting in a cameo as Dominar Rygel XVI? How about the Wizard of Oz spoof featuring Vala, and Daniel as the Cowardly Lion? Sam and Jack’s wedding? Teal’c P.I.? For our money, it’s the Team America-style puppets alone that are worth the price of admission. 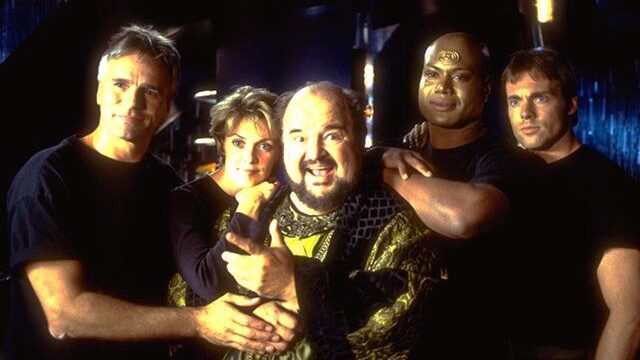 Stargate had an in with comedy legend Dom DeLuise: his eldest son, Peter, was a regular director and producer on the show. When they offered Dom a chance to guest star in an episode and work with Peter, he jumped at the chance. He played Urgo, a lovable rapscallion who also happened to be a hallucination from an alien brain implant stuck inside the heads of SG-1.

And he also played Togar, the alien scientist who Urgo was convinced was a vile and cruel villain who would scoop out the team’s brains with a big scoopy thing. “As handsome as he is evil!”

This episode has a great concept and execution, but we can’t help but wonder how much the final product owes its success to the featured guest star. There was a ton of improvisation on the set this week, with DeLuise set loose in a situation where only Jack, Daniel, Sam, and Teal’c could see and hear him. For General Hammond and Dr. Fraiser it was like the team had an imaginary friend … one who couldn’t help himself but drive them crazy with his incessant desire to see and experience new things.

“Urgo” is hilarious, thanks to Dom DeLuise’s genius as well as the main cast’s ability to play the perfect comedy straight men (starting with Teal’c drinking an entire pot of steaming hot coffee). It’s also one of the show’s most meme-able, most quotable episodes:

“Apparently, all desserts on base are in grave danger.” 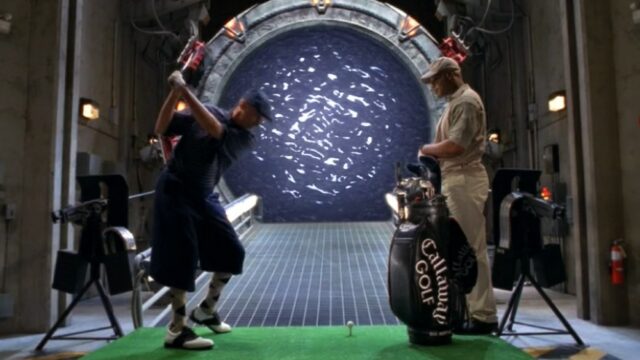 This fan-favorite from SG-1‘s fourth season isn’t just one of the series’ best episodes overall. It’s also one of the funniest. Sandwiched in between the sci-fi set-up of a device that creates a bubble where time is looped over and over again, and the mythology of the Ancients and their struggle to escape a catastrophic plague, and a stirring dramatic turn at the end when Jack talks about his dead son … well, in the middle of all of that is wall-to-wall hilarity.

This episode is Jack at his most Jack: dry humor, subversive, and a sharp wit. It’s already genuinely funny to see Jack and Teal’c — the two members of the team who are least equipped to deal with the situation — struggling to convince everyone else that they are stuck in a time loop. They even try to learn Latin in order to help translate the Ancient script on the alien device. But when Daniel suggests that being stuck in a loop means they can do whatever they want without any consequences … all bets are off!

“Window of Opportunity” shines in these montages, from Teal’c learning to juggle to Jack planting a monster kiss on Sam just as the loop resets; from the Colonel working on his pottery skills and riding a bicycle down the hallway to the iconic moment of the two hitting golf balls through an open wormhole.

“How far away is Alaris anyway?”

How would you rank SG-1’s comedic outings? Post your five funniest below — or tell us about your favorite funny moments from all those other non-comedic episodes!

Typo: All [bests] are off. Should be “All bets are off”

I’d put the bad guys in instead of urgo, but that’s just a personal preference. Good list!

As usual a great synopsis. captured all five. Couldn’t agree more on the order

The Season 5 episode ‘Failsafe.’ Jack’s comment, “Carter, I can see my house!!”

You ended that sentence with a preposition. Bastard!

The one that cracked me up was when they were pitching all the episodes and Martin knew them all, Wizard of Oz etc. When Farscape was pitched and he said you’re right, I have absolutely no idea what that is, I was on the floor