Today is the day:  SCI FI Channel, the home of the Stargate franchise for the past seven years, is now Syfy.  (That’s officially a lowercase letter F, friends.) The rebranding officially kicks off today with a new name, new logo, new tagline (“Imagine Greater”), and the premiere of the cable network’s new original series, Warehouse 13 (tonight at 9 p.m. / 8 Central).

The channel’s programming foci, however, will stay the same:  not just traditional science fiction, but also more Earth-based fare like Eureka and Warehouse 13, Saturday night creature features, and reality shows like Ghost Hunters and Destination Truth.

“It’s a brand that catches up with our programming,” Craig Engler, senior vice president and general manager of Sci Fi Digital, told Wired.com.  “It is our stake in the ground. Last year was tremendous for us, with Battlestar Galactica getting recognition as one of the best dramas on television. But I also judge our success by how much I see people in media and life use the word frak.”

Among the reasons for the switch: “Syfy” is a unique and trademarkable brand name, unlike the generic genre descriptor “sci-fi.”

On the Web, the network has officially kicked off the new Syfy.com.  Like its predecessor, the phonetically identical SciFi.com, it’s probably going to maintain claims to the highest-traffic genre site on the Internet (nearly 5 million unique visitors a month).

The site’s popular science fiction news service was recently spun-off to its own site, and remains at SciFiWire.com.

SCI FI first launched in September of 1992, and is currently in 95 million homes in the United States.  Syfy is (still) a division of NBC Universal Cable.  The network hopes to reach 50 channels internationally by the end of next year. 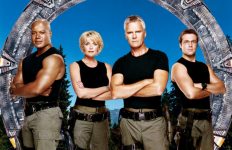 Report: MGM (and Stargate) May Go Back On The Selling Block→

Is this the teaser that will air tonight? Its the first time I’ve seen it. Has some scenes that I’ve never seen before. http://video.syfy.com/shows/universe

*Rolls eyes* Come on “Syfy”, definitely imagine greater . . . . names. I can see why they wanted to change to something less generic, but still, that’s just weird.

Yeah I doubt the premise will stay the same for long. NBC has offically gotten the channel out of the confines of the Sci-Fi genre and will start airing stuff thats decidedly not Sci-Fi. Ecw, GhostHunters, etc were just the start.

syfy – does seem to fit, in the sense that they occasionally have true science fiction, but lead with things that are not. Same as their use of English pronunciation.

Oh, yeah, the wrestling is what convinced me they were on a new path. Without SciFi they become the MTV without the music videos. Just another network taking up space.

Maybe someone somewhere will come up with a real science fiction network.

Gen. Hammond, to O’Neill, both staring at gate ramp from control room: “Colonel, any ideas about our new visitor?”

O’Neill: “Looks like some sort of post-holocaust..ghost..wrestler..prodigy..thingie. You know what, I’ll just be in the canteen.. sir..later, yeah..gotta run..”

the fans tried to tell them the new name sucks, but they refused to listen.. wtf are these people thinking with dumb names changes? does someone get paid for stupid ideas?

I think the name change is stupid.

That said, I will watch the network still since we do not have another network showing Sci-Fi.

I just wish SyFy would drop Wrestling and stop making crappy rip-off movies and use the cash to show more canceled Sci-Fi shows and make new ones. They used to do good Mini-Series/Movies, except lately.

The illusion of progress when there is none.

Does not bode well.

They forgot Poland! In Polish ‘syfy’ means ‘goo’ or ‘crap’.

Stargate Universe, the third series in the franchise that helped make SCI FI Syfy a Top 10 cable network, premieres in October. A new teaser will air with Warehouse 13’s premiere tonight. Yeah right but they axed SGA though. Besides why in earth this name change? SYFY sound the same sorry. The new commercial is great though no daught about it. http://video.syfy.com/v1131680/?&dst=syfy Has this name change also to do with getting a younger public? I have a feeling that thats it, and although they say they had 2 Stargate series on their channel and with SGU a 3rd one they… Read more »

I meant they axes SG-1 sorry for the misstake