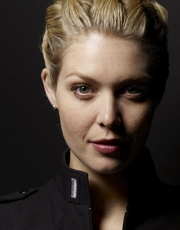 UPDATE: Alaina’s due date is December 9, she told Twitter readers. This puts her at about seven and a half months at the conclusion of Season One’s filming. Should SGU be renewed, filming will likely start in late February.

The show is heading into its final week of filming for the first season.  So with production on a hopeful second season gearing up in February, will the show’s writers include the pregnancy in Lt. Johansen’s storyline — or shoot around it?

“You have to watch,” Huffman smiled.  “I think every actor on the Stargate franchise has had one or more kids.  [The writers] know what they are doing, and they know how to deal with it.  I can’t give away spoilers whether we are or are not going to entertain that possibility.  You’ve just got to keep watching!”

Stargate‘s last pregnancy was Rachel Luttrell’s, which was turned into an on-going storyline in Atlantis‘s final two seasons.  But others, such as Amanda Tapping’s maternity leave during the start of SG-1‘s ninth season, were written around (in that case, with a 5-episode leave of absence).

Huffman is married with two children.  She told the site that SGU is an ideal environment for a working actor with a family.

“It’s my dream,” she said. “It’s an ensemble cast, so I am afforded the ability to walk my kids to school and sometimes pick them up, or sometimes both, and still work and still have tons of time off every year. … I couldn’t ask for a better job or a better situation.”

In the full interview, Huffman also talks about settling into T.J.’s character in the first season, the off-screen friendships she has developed, and more.  Watch it now at SCI FI PI!  Part 2 of the interview is coming soon.

Stargate Universe airs Fridays at 9 p.m. (8 Central) on Syfy in the U.S., and Fridays at 8:30 p.m. (with new episodes airing one week later) on SCI FI Australia.

Congratulations to Alaina and her family!

Honestly… I have to say I totally saw that coming. I think there is a possibility that the writers will use that in the storyline.

kill her off. she’s a nothing character.

@Jack_Bauer Yeah lets get rid of the only medical personal on the whole ship, that sounds like a smart idea. @Eden You saw what coming? That Huffman was going to get pregnant? Cause that seems a little creepy. Stargate has gone both ways with including pregnancy in the show, I think it will depend on what sort of character TJ becomes, there is obviously a chance that they will use it, but at the same time, adding a child too the ship this early on might not be the best idea. Worked differently in Voyager, they knew from the start… Read more »

@canonfodder:
Ahh right, so the writers aren’t allowed to kill a character off because it means the survivors will struggle without the medic? How very… convenient.

We are 4 episodes in. Give it a break. How can you say she is a useless character if we haven’t had enough screen time to make a statement like that.

Maybe *this* time the writers can actually do something with the pregnancy. It could make great angst to be preggie aboard an old rusty ship and there’s nothing she can do.

I guess we’ll have to wait.

Congratulations to Alaina!
But I hope they do not write it into the show, the last thing SGU needs is baby angst.

LOL!!, I bet Col. Everett Young might have had something to do with That. (Atleast the Podcasts, which I finally listened to seems to think Young had some deep/dark liason with Johanssen (or whatever her name’s supposed to be)

Also hope someone will post if that story line happens on this Forum (since I’ve moved on, but still fun to figure out that it was predicted waaay back when..)

I hope they don’t write it into the show. Pregnant women in movies and TV are frequently defined only by the contents of their womb. This group of writers did exactly that with Teyla in Atlantis. The women on this show are poorly characterized and stereotyped as it is.

so your saying that a women who basically can kick anyone’s but including army personal is a sterotype (teyla), or a women who is clearly smarter than everyone else around them (carter)?

I personally think they do a awesome job of characterizing the women, tho dont get me started on the men……

Promythus, yes both Butt Kicker and Genius are stereotypes. But the women on Atlantis and SG-1 still had more to do and held higher positions of authority in their first 4 episodes than the women on Universe. The men are trying to fix the ship and going off world. Wray is nonexistent, TJ constantly talks about her inexperience, Chloe cries and takes a shower, and the tough military woman is stalked by men and gets camera shots blatantly focused on her breasts. Brilliant.

i still think they did a amazing job syncing the character types with the bank round stories, even tho you he cloe crying you still see Scott being emtional/ having baggage, if anything the biggest sterotype is Eli lol

I think it would be an intersting plot-point if the studio did include her pregnancy into the character.

On Atlantis it was second-nature for characters like Teyla to have children; the Pegasus Galaxy was her people’s native territory and future generations were always expected. However, SGU has yet to demonstrate how families would work on the Destiny which was, in all fairness, apparently developed by the Ancients as a “generational ship”.

LOL! In a previous page discussing the body-switch of Wray & a disabled woman, I proposed the idea of having an accidental pregnancy on board Destiny…only I was thinking it might be Wray’s baby that the other women conceived with Rush. So, this is a little different, but ultimately, the same idea: WTF do you do when you’re in this crappy situation & now you’re preggers?! I got bored after the 1st 2 epps but now maybe I’ll get back into it. I know some of you don’t want to see that written in, but as a SG fan who… Read more »

My god! It’s full of stars!

I bet lots of people would have thought Teal’C was a ‘useless’ character 4 episodes into SG1. Geesh. You want everything NOW?? Such a shame you have to take time out of your busy life to actually watch more than one episode. Maybe they should have condensed the ENTIRE SERIES into one 2 hour show for you.

I think if they add it in the show i think it adds a little realisem. I think if they do they should show the extream reaction of the crew. some happy about other agrey as it adds to the growing needs of the grew that has very limited surpliys.
I just hope it’s not going to be a pregnantcy by the alien of the week storyline.

Congratulations to Alaina and her husbend/partner

Its understandable how she gets knocked up so much.

Wow, them adding her pregnancy into the show could be just as annoying as Teyla’s. This does not bode well for me continuing to watch this show. Children just ruin things 9 out of 10 times on shows, in my opinion.

Is she going to start seeing mystical visions of a man she loves very dearly that we have never seen before?

Well… she did resign her post two weeks prior to the attack. Seems like a good reason and one she’ll want to keep secret. Sigh, I agree… better to not write it in, but it could very well already be in there.

Brings up the point about what they’re doing for birth control? Probably no one brought a significant supply of anything.