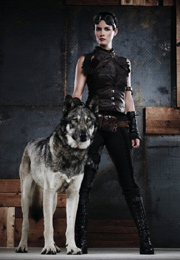 A new fantasy series is getting ready for its Internet debut, featuring a cast heavy with Stargate veterans.  Riese is described as “a unique and original steampunk-inspired Web production,” which filmed in Vancouver in August and premieres online on November 2.

Starring in the series is Christine Chatelain,  who recently guest starred as Clara in the 2-part season finale and 2-part season premiere of Syfy’s Sanctuary.

Riese is a unique-looking show that blends fantasy and steampunk, in the story of a girl who may be the salvation of a wasteland that was once a thriving world. Here’s the series description from the producers:

Riese is a world of moral ambiguity and political intrigue. A decimated land populated by characters from dreams and nightmares. Loyalties are ever in question, suspicion in the minds of all. A power-hungry tyrant, Empress Amara – ruler of the kingdom Eleysia – has been conquering nation after nation in order to unite the people under one banner. From the shadows, however, an enigmatic group clearly wielded power over her. Called The Sect, they purported themselves to be the official religion of Eleysia, and began to spread alongside the nation’s borders, infecting the lands with chaos and turmoil.

And yet, despite the impending doom, a single beacon of light shines in Riese. A mysterious wanderer, she travels with her wolf Fenrir across this barren land. Branded as heretics by The Sect, Riese and Fenrir will pause to aid those in need as they travel, but they must evade capture at all costs. As she flees, she’ll piece together her past and her destiny, in a conflict that will hold the fate of this world in the balance – and the once peaceful kingdom of Eleysia will be the battlefield.

Watch the trailer below:

Riese will be released bi-weekly, with five episodes comprising each “chapter.”

Learn more about the show, check out photos, and watch videos at RieseTheSeries.com! An immersive, alternate reality game will also run at TheSectIsHere.com.

(Thanks to Kristen and Ryan for the tip)

heavy with star gate veterans? most of those names were one or two episode characters.

Every one of the Stargate actors listed have been in a minimum of 4 eps, some have even been in 12 and 18.

Can’t wait for this series.

I have a feeling Syfy will pick this up…

Looks good i hope that Syfy will pick this up

Got it bookmarked
thanks :)

For me the actors are not so important but how the Show is made (creativity).
I give it a try but the show looks not like me style of shows i watch,

metonic that’s your opinion. I for one can name every episode Sharon was in just because you don’t remember her doesn’t mean others don’t.

[…] Times and The Globe and Mail, as well as other traditional sci-fi outlets such as Sci-Fi Talk and Gate World. The premier episode got so many hits when it launched that YouTube quickly contacted Copple about […]