Only moments after we ran the announcement at Stargate Universe is coming to DVD and Blu-ray on February 9 as a half-season release (story), The HD Room has published what looks to be the first look at the Blu-ray cover art. 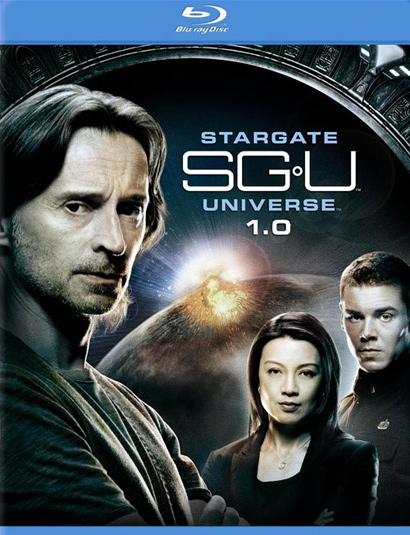 The DVD cover will probably look the same.  The art is, of course, subject to change.  (Note that MGM and Fox Home Entertainment have not yet officially announced this release.)

Head over to The HD Room for the original report!

UPDATE: Check out TVShowsOnDVD.com for 3D box art for both the DVD and Blu-ray edition.

So, what do you think?

OK, maybe it’s just because I just listened to your podcast on sex, but that thing in the background looks disturbingly breast-like…

Ah, nice to see that Lieutenant Boobs made it on the cover.

Either have the cover title as ‘SGU’ or ‘Stargate Universe’. It looks stupid with the initials AND the show title on there.

At least its on Blu-Ray though. I’ll be waiting for the full season release instead of the half season boxsets that they are going with first.

Not at all sure I understand the first comment above – What thing in the background looks disturbingly breast-like. You can’t possibly mean the sun coming over the planet? I suppose one can see sex in everything if that’s what one wants. LOL!

@zack I certainly didn’t intentially set out to see the breast-like imagery, but it just stood out when I looked at it! I’m sooooo sorry. :O

I desperately, desperately hope this is fan-made. Why? Because it LOOKS fan-made. It looks like the cheap crap you keep walking past in the store to get to the items that are presented well.

If this is real, MGM’s marketing division has plenty to answer for.

I still think its stupid to sell this as a half-season. This show is not good enough for me to go out and spend money on it twice a year. I will not buy it.

Pretty cover. Not worth the price though. It averages out to what? $4 an episode?

My home made dvd’s will suffice. :)

It’s a boob! Seriously, the orange and black explosiony part form a perfect nipple. Someone in the art department has a sense of humor.

@Sylvia: You’re right. It’s a boob with a nipple XD Yes, it’s juvenile but I can’t help it. Now that Sylvia pointed it out, all I can see is a breast XD

Thanks a lot people. Now I can’t look at the cover without seeing a big ol’ boob.

The cover looks cheap and lack luster. Plus where’s Col. Young, Eli and Destiny? Three of the better characters on the show. Not sure if this cover art is a good representation of the show at all.

Not a very good cover. The thing that bugs me the most: there are no main characters. 2 of them were suppossed to be main but so far have been background players and the third is a recurring that gets more attention then she deserves.

Where’s the Destiny, the whole point of SGU? Don’t like it…

I would love to have SGU on blu-ray, but I want the whole season.

And that is an ugly cover.

Sylvia, you’re too funny for words! It does look like that, LOL

Blu-ray… Hmm, I’d love to have Stargate on Blu-ray… You know, Stargate, the REAL Stargate, not this “Desperate Spacetravellers” parody on a scifi genre… Yeah, I’d rather check all the nice planets, artifacts, aliens and what not in HI-DEF than socks and legs of Lt. James in a broom closet…

Nice to see the SGU insults managing to get into yet another article.

Not a big fan of the cover myself, would have included Young instead of Camille and shown the Destiny itself.

Its Ok, but i’d like to see the Destiny in forefront with the planet in the background with Young on one side with TJ, then Scott, Rush, Camille and Elie on the other. Or just the ship flying through the new gate. What ever comes out I’ll still buy it regardless.

At least the cover seems to carry the overall tone of the series. Boring.

I guess this one’s a bust, (no pun intended), props to Sylvia for recognizing the boob! :D

Is it just me or is everyone on that cover Blue Steeling? It’s not a fantastic cover to be honest, they should have a fan made cover competition than maybe one of us can make it better.

People are really immature patronizing the cover just because they can. AM I glad that SGU will be on blu ray?Damn straight am I pleased about the half season? Nope. Will I be buying it? Yup.

I can’t believe how much effort they’ve put into that cover considering it’ll only sell 8 copies!
And why is there no sex scene on the cover?
@Mitchell82: Why would you buy a DVD if you weren’t happy with the episodes?