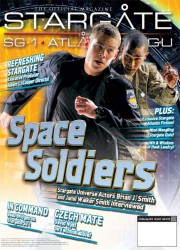 The brand new issue of The Official Stargate Magazine is on sale now, featuring a new interview with Stargate Universe writer, executive producer, and sometimes director Robert C. Cooper.  Cooper talks about his directing stint on the episode “Time,” as well as the challenges of writing the 3-hour series premiere, “Air” (with fellow exec Brad Wright).

“Writing the first episode of anything is always a struggle because you’re trying very hard to come up with something that introduces your characters to the world,” Cooper told the magazine. “It’s very easy, though, to get pilot-oriented and write something that is overly focused on the introduction.  For us, what made the pilot work was its actual structure where we tell two stories that are inter-cut, one story being the present situation of the team appearing on the Destiny, and then the other story of how they got there, which is told in flashbacks. I think that helped propel us forward with regard to how we wrote the pilot.”

With Cooper and Wright’s 3-hour script for “Air” in hand, the producers turned to director Andy Mikita and director of photography Ronn Schmidt (The Shield).

“As far as the filming of ‘Air,’ we’d talked a lot about the style of the show and what we wanted to try to do,” Cooper said. “To then actually see it happen and come to life was great. There is a certain magic that comes out of this specific type of filming, which is documentary style and having the cameras sort of hang back and just try to capture the action that’s happening on the stage. It’s much more like watching a play unfold.

“Right away it was clear that we were getting something we’d hoped for but weren’t sure was going to happen, which were stronger and more natural performances.  That’s obviously a testament to the high quality of our cast.”

Look for Issue #33 of The Official Stargate Magazine on news stands now!  The issue also includes interviews with actors Brian J. Smith (“Matthew Scott”), Jamil Walker Smith (“Ronald Greer”), and Beau Bridges (“Hank Landry”).  In the U.S., you can find it at major booksellers like Borders and Barnes & Noble.

SGU returns to Syfy with new episodes on April 2.

I honestly hated the flashback storytelling device in Air, but other than that I loved it. I just think it would have been way more suspenseful and mysterious if it was told chronologically, like Rising.

I admit that I got a bit sidetracked trying to figure out where I was in the story at times with all the jumping around in Air, but other than that I thought it was a phenomenal intro to the new series. Scott and Greer’s race to the gate in part three was truly the first time I had been on the edge of my seat watching a Stargate since SG1 season 8!

We recently re-watched the series right before ‘Justice’ came out, and I have to say, I am really enjoying the new format. More real, more gritty, and they found a great cast of well known and new actors. I hope it lasts at least as long as Atlantis.