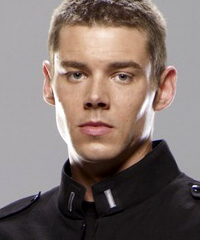 First Lieutenant in the U.S. Air Force and a member of Destiny's crew. Though relatively inexperienced at the concepts of the Stargate or interstellar travel, Scott is a capable leader with a strong sense of the chain of command. He is head-strong but willing to rely on the support of his fellow officers and friends. The survival of the Destiny crew is his first priority.

Still, he struggles with numerous demons. Scott lost his parents to a car wreck at the age of four. A Catholic priest raised him for the next twelve years until he died of his alcoholism. At a young age Scott considered joining the priesthood himself, but he began to question those plans when he impregnated a 16-year-old girlfriend, Annie. He believed for years that she had aborted the baby, and discovered (after being trapped on Destiny) that she had the child and is now raising his son.

Icarus Base was Scott's first S.G.C. assignment after training. While there, he became consummately involved with his subordinate, 2nd. Lt. Vanessa James, against regulation.

When Icarus Base came under attack, Scott was the first officer to travel through the Stargate and board the Destiny. The chaos that ensued included the casualty of his superior officer, Colonel Everett Young, who was badly injured. Young placed Scott in charge, and he immediately went to work to restore order and establish a line of authority. After the Colonel's recovery Lt. Scott continued to serve in a vital leadership role, helping to direct the crew's military contingent and to protect its civilians.

Despite his rogue nature, Scott still wears a cross around his neck. He counts Ronald Greer as one of his most trusted friends. He has developed an intimate relationship with Chloe Armstrong -- perhaps one of the first serious, long-term relationships of his life.

Air, Part 1 - When his superior is injured, Lieutenant Matthew Scott must take command of the Icarus personnel who survived the base attack.
Air, Part 2 - Aboard the Destiny, Scott joins the search to track down a hull breach which is venting the ship's diminishing oxygen supply into space.
Air, Part 3 - Scott leads an expedition to an unnamed world in the hopes of bringing back supplies to fix the ship's life support. In the process he is forced to face demons from his past.
Darkness - For his contribution to Eli's "message in a bottle" kino, Scott recites Psalm 23 in prayer of the Destiny crew.
Light - Believing Destiny will be engulfed in a star, Scott and Chloe Armstrong begin a romantic and physical relationship. Later, Colonel Young pre-selects Scott and Johansen to lead 15 survivors to a habitable world.
Water - While collecting supplies of fresh water for the ship, Scott nearly loses his life in a cave-in.
Life - Matt returns home via the communication stones and is shocked to learn that his ex-girlfriend is raising the son he never knew he had.
Faith - Scott leads a team to spend four weeks on an idyllic planet, and decides to stay with them and watch out for them when many refuse to return to Destiny.
Lost - Matt's command abilities are put to the test when he, Eli, Chloe, and Greer are accidentally left behind by Destiny.
Cloverdale - Scott is infected by an alien organism, and his mind falls into a dream world where he is marrying Chloe in his small home town. In the real world, Chloe saves his life by exposing him to her genetically-altered blood.
Trial and Error - With his commanding officer suffering a psychotic break Lt. Scott confronts the Colonel directly, using tough talk to make him step up and take command of the ship again.
Epilogue - Thanks to the Novans' historical records Matt sees an alternate timeline where he and Chloe were married and had a family.