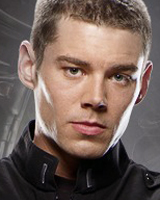 Smith hints (spoiler free) at what fans have to look forward to in the back half of SGU’s first season, which returns to Syfy Channel on Friday, April 2. “I think what you’re going to see in the last half of the season is us having to deal with a lot of outside threats — external people who are trying to harm us, [and] to harm the ship,” he said. “There are some continued divisions within the ship. We also are going to come across some incredibly powerful natural forces.

“This last half is about taking what we’ve established and then really messing with it.”

The season finale in particular is sure to disturb viewers, according to the actor. “We’re going to leave you with the last episode that … when I read it, I got upset,” he said. “There is something that happens in that last episode that is so upsetting, so cruel, and so wrong that just thinking about it gives me goosebumps.”

In the 6-minute video Smith also talks about his new dog, Cassie, interactions with fans on Twitter, and the passionate response (and criticisms) fans have had to the show.

“It’s actually a blessing that we have such an opinionated and passionate and devoted following of people,” the actor said. “It’s been a really fantastic year getting in touch with the fans, and getting some live feedback from people — trying to see, ‘OK, maybe some people like this aspect of the show and they didn’t care for this aspect.’ It’s all information; it’s all good to hear.”

Watch the full video below, courtesy of SciFi Wire. And stick with GateWorld for continuing coverage of Stargate Universe as we prepare for the show’s return in just over two weeks!

Kind of wish he hadn’t revealed that about the finale, would have been much better as a surprise.

this info is just a bomb waiting to go off.

usually I’m a spoiler @$$, but after reading the responses of you 2, I’m not reading this article. No doubt the finale is cool and after spoiling myself with stargate for years and years, starting today, I’m not reading the spoiler, nope, I’m just gonna go back to the forum’s stargate tech and continue learning about bosons and gauges. Yup, I am not going to read/watch the spoiler—maybe just a peek…….

A major character death. I bet that is what is shocking in the season 1 finale. If it turns out that I am right, I hope that the ‘Daniel Jackson Manuever’ will kick in somehow.

“Daniel Jackson Maneuver”
Meaning: ‘When a major character dies in the Stargate franchise but is always brought back somehow, either by alien intervention or mystical interpretation’.

The heating is going to go out and the crew are going to burn a bag of kittens for warmth. However we then find out one of those kittens was only days from retirement, and Telford and Young were having an affair with the tabby.

As for me, I’ve decided to give these people the benefit of the doubt. I won’t mind a slow start if the second half provides a lot of payoff. So, I’m going to wait and see with a hopeful attitude. Anybody with me?

“[Stargate Universe] is so upsetting, so cruel, and so wrong that just thinking about it gives me goosebumps.” Haha, just kidding of course (sort of). I agree it’ll be a “major” character death. But really, who do we care enough about to feel a sense of loss for?? Wasn’t there a scene in one of the new trailers where someone was underwater drowning? I think it was the girl who never stops crying? Or possibly the IOA lesbian? Anyway, maybe that’s the big upsetting thing, since drowning is not a nice way to go – although kind of similar to… Read more »

Right behind you Pioneering!

“I agree it’ll be a “major” character death. But really, who do we care enough about to feel a sense of loss for??”

Heres hoping it’ll be more than just one major character so then they could try bringing in some characters that we can actually like for the second season.

It was the Destiny’s shield that was leaking oxygen by the way, it was the shuttles. Besides, most of the shields in the show have been one way anyway…

Have you stopped to consider the possibility that it might be a character death of a character not on the Destiny? It could be something really shocking like the death of Colonel Carter, General O’NeIll or Daniel Jackson (again). I for one, hope not, but SGU is long overdue for something ‘shocking and upsetting’ as Brian J. Smith has said, but I can’t see it being one of the crew on Destiny since the main actors haven’t announced they are leaving or taking less time on SGU. I really hope that it isn’t Sam, Jack or Daniel that dies. Otherwise,… Read more »

It would be incredibly stupid for them to kill off an SG1 character. Even though realistically they are probably never going to make another SG1 movie, if they killed of an SG1 character, the fan outrage would only multiply the already massive hatred and anger towards SGU.

I think the upsetting ending will be that after using the stones Young returns to his body and finds Telford on top of Lt. Scott in the middle of …shall we say…”the throes of passion”. Ewww. Disturbing.

not going to listen to the interview, I want to be surprised, but I am looking forward even more now to the second half of the season

No sex scene for Scott? ;D

Just kidding though. I love the show so much, that I actually hate Mathew J. Scott! I know a dude just like that and he annoys the hell out of me! And there’s a parallel to the whole Chloe + Scott + Eli triangle thing too! Eugh, I hope Scott dies…

i think it would be great if they all got killed and the destiny blew in half at the end or something like that. seriously. no joke. they have been lucky as hell. but the luck runs out. it would be a great ending.

“It’s actually a blessing that we have such an opinionated and passionate and devoted following of people,”

“It’s been a really fantastic year getting in touch with the fans, and getting some live feedback from people — trying to see, ‘OK, maybe some people like this aspect of the show and they didn’t care for this aspect.’ It’s all information; it’s all good to hear.”

Yep, definitely media training. :)
Keep this up Scotty you’re doing way better than with the comments you made in the previous interview.

Media training indeed. I’m glad someone had a quiet chat to him. Being blandly pleasant is definitely a better approach than going on the defensive attack and it’s certainly resulted in killing off pages of angry comments.

Charm is the chloroform of fandom; he’s done well.

The problem is of course that the media training was too late. No one believes his nice words now.

Interesting has me a bit curious to check some SGU episodes out. I’m not big on drama but natural forces and aliens sounds cool.

However if any SG1 or SGA characters are harmed I will dismiss SGU as non-canon.

Who knows, perhaps the aliens will turn out to be some of your non-ascended friends ;)

they seem to be more upset about SGUSucks.com becoming more popular by the day.

Does anyone feel like SGU has ben a let down, its been my fav. franchise but its like watching paint dry. ime hopefull the second half will be better because i never thought it would be as bad as it is

if you go to imdb and look at the list of characters it tells you how many episodes they are in. this will give you a clue as to who may or may not be killed off

Knowing that something upsetting happens doesn’t really spoil anything. It could be a number of crazy things. I for one am not worried.

“There is something that happens in that last episode that is so upsetting, so cruel, and so wrong”

Following SGU writers spirit so far, my bet is Chloe being raped by some Lucian alliance villain.

how could they rape a character that gives it away so freely? She would probably go after them for a bit of variety. Lets face it, she doesn’t have many options on board at the moment

Anyway as the plot developed, I am making Chloe gets raped my SECOND bet. My first bet is that something horrible will happen to the baby (TJ).

Just trying to follow the twisted mind of whoever writes this show.