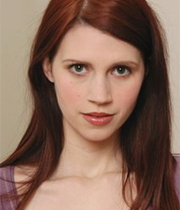 McNiven, 29, has a list of credits including Hildy on Mad Men and Anna Milton on Supernatural.  She has also appeared on Desperate Housewives, New Amsterdam, and Law & Order: Criminal Intent.

In a press release, Syfy also confirmed the casting of actor Robert Knepper (Heroes, Prison Break) as Simeon (story).  He will appear in six episodes.

Both characters make their debut in the season premiere, “Intervention,” GateWorld has learned.

The network also confirmed that Season Two will begin airing in the fall of this year.

In the meantime, the second half of Season One commences tomorrow night with “Space” at 9 p.m. (E/P)!  Learn more about this and other upcoming episodes in GateWorld’s SGU episode guide.

I think having the Lucian Alliance on the show is a bad idea. They are not strong villains at all. If SGU is trying to be different, then there should be a new recurring villain. And how is the Lucian Alliance all of a sudden capable of attacking a fortified military base in the mountains with a cruiser orbiting above the planet? That just makes no sense.

She was very good in Supernatural so I’m all for this. I’m assuming the are going to make the Lucian Alliance not seem like noobs. Perhaps a new branch or covert section we have not seen before, etc.

Oi it was hard enough to think up a plausible scenario where ONE Lucian Alliance spy was able to either a) infiltrate one of Earth’s most important off-world bases, or b) land and get through the Stargate in the attack (and then have nobody wonder who they are etc). I don’t even want to consider there being a c) involving those damn stones O_o @JohnSN7, I’ve made the same comments before about how even 3 Ha’taks shouldn’t stand a chance against Earth’s newest cruiser, let alone how only a few minutes of orbital bombardment made the MOUNTAIN unstable enough to… Read more »

I wish they would of come up with a whole new enemy rather than the Lucian Alliance since they are millions of light years away. But who knows maybe it will be a good episode.

Do Angels qualify as Aliens?

Oh my god, not Lucian Alliance :(.

@Kosh “Anyway.. at this point we all know the show is weak on Sci-Fi because it’s a character drama/soap opera dealy. Just sucks though, stuff like this would never have happened in previous Stargates (at least not w/o better, more believable explanations!).”

You mean like a Wraith cruiser standing up to Atlantis drones, but blowing up from a single nuclear warhead? Or the nonsensical “Red Sky?” Stargate has never been wonderful on believable sci-fi. But any time you’d like a plausible explanation of the Icarus attack, I’ll give it to you.

I liked Julie McNiven in Supernatural till the writers turned her against Sam and Dean in it, she is very nice to look at..

@morrolan, well I mean pretty much any armored structure or ship is made to withstand strikes from the outside to protect what is inside. But if you detonate something (especially as big as a nuke) inside the ship/structure, especially in the vacuum of space, I don’t really have a problem with the ‘science’ behind that being more deadly than drones? As for “Red Sky”, that’s the old SG1 ep where they screwed up the sun’s mass or whatever? Sure, that is kind of over the top and nonsensical… but isn’t that also part of what makes it Sci-Fi (“fiction”)? Besides,… Read more »

Doh sorry… Paragraphs didn’t work for some reason, can you edit these comments? Reading walls of text is no fun heh O_o

I am so sick and tired of getting our butts handed to us. The only time we win is in the last two minutes of the show by a fluke. The LA in no why shopuld have even got a shot off with our ship in orbit. It had Asgard shields and weapons. Remember the Quald running like little scared puppy dogs when they was just one Asgard ship in the solar system. Yah…. Pretty Lame TPTB. Why can’t we kick butt now. Its time. Now we are getting our butts handed to us by their former slaves. Way to… Read more »

I enjoyed the Lucian Alliance in SG-1, but have my reservations for their role in SGU. I guess we’ll all have to wait and pass judgement until they make an appearance with the Destiny crew. (Minus that whole mountain destruction thing…)

I dont like the Lucian Alliance making an appearance in SGU. Now, that being said, i have no problem imagining the LA progressing, advancing after the Goa’uld, Ori and even replicators are gone. People seem to forget that, compared to earthling, all their resources have been directed to acquire technologies and artifacts left behind. Theyve been focused on becoming “the” human group in the Milky Way, and as long as the stargate program is kept secret from the public, the LA have the upper hand. So a more advanced LA is plausible. We know theyre not the kind to sit… Read more »

Something most folk need to remember tho, is that it’s been a good few years since SG1 ended and we last saw the Lucian Alliance. They may have gotten stronger over the years or, and this is my theory, they got “the jump” on Earth’s ships and with the planet being unstable at best a few shots made it ready to blow. Also if the shields are down on the Earth ship when a few hataks attack then it won’t matter if it has Asgard tech it won’t last long. It’ll most likely be explained in the second half though,… Read more »

Maybe the Lucian Alliance got more powerful over the course of two years and salvanged some technology. But that doesn’t change my main criticism of all three Stargate shows as a whole. My main criticism is the sudden shifts in the power level (“What’s the scouter say about his power level?”) of the enemies. In the first two season of Stargate Atlantis, it took almost a whole magazine or at least several well-placed shots to kill a Wraith. In the later seasons of Atlantis anyone could kill a Wraith with 1-3 shots. Even Keller of all people could kill Wraith… Read more »

the Lucian Alliance, i can get how they attacked the base, sure i can even go with the planet going boom because of it. getting a spy in durning the attack. i can not buy. getting a spy in through earth, i can not buy unless they do some back stroy of how, even if it’s this, they land on earth in a cloaked ship. aliens, from some backwater ex-guald world with no knowledge of earth or the us culture infiltrate our society, then bribe some scientist or military personal to then work for them? i wounder why is the… Read more »

I have to agree I dont really care for the Lucian alliance. Also Julie Mcniven is the only actress and character that i liked from that story arc coming in…AND they are killing her off next week wtf. That makes me mad, because I like her on the show more then most of the other women on the show. She seems normal and not in the middle of a drama fest. bah

I’m not an avid follower of the SG1 series but I feel I need to point out some things here.

[…] clue: According to GateWorld, Ginn will only be around for five episodes, and since she’s Eli’s girlfriend, you’d think she’d become a major […]