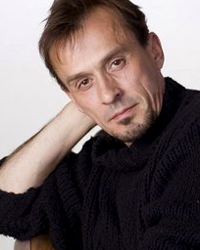 Actor Robert Knepper has been cast in a recurring role for the second season of Stargate Universe, according to RobertKnepperFans.com.

Knepper will play Simeon, a member of the Lucian Alliance, in a story arc spanning six to seven episodes (story).  Here’s how casting documents describe the character:

Simeon is a dangerous Lucian Alliance soldier.  He was a seasoned criminal before being recruited by the Alliance.  He’s strong and intimidating but more crafty and wiry than big and muscular.  Scary in that you’re never sure what he will do.  He also holds secrets that are desperately sought after by Earth and those on board Destiny — secrets he would die or worse, kill to protect.  He’s an antagonist for several episodes before he finally comes into serious conflict with Robert Carlyle’s character Rush and they are forced to face off.

Born in Ohio, the 50-year-old actor most recently appeared on NBC’s Heroes as Samuel Sullivan, the chief antagonist of the fourth season.  Prior to that he played T-Bag on Prison Break, and Tommy Dolan on Carnivàle.

His long list of screen credits also includes The Day The Earth Stood Still, Good Night, and Good Luck, and Murder, She Wrote.

Knepper’s first episode is not yet known, but executive producer Joseph Mallozzi recently hinted on his blog that the actor was in the production offices this week for a cast read-through of a script.  With episode #4 (“Pathogen”) wrapping yesterday, the season premiere, “Intervention,” is believed to be shooting this coming week.

Awesome! I loved his role on Heroes.

Great news! I haven’t watched a lot of Prison Break, but he was great on Heroes.

Never can stand that guy in Heroes…and now here…

Nice! he is a brilliant actor: Loved both T-Bag & Samuel Sullivan.

His character on Prison Break was truly despicable… He was a racist, pedophile serial rapist and murderer with no conscience. And yet he made it through all four seasons due to popularity with the audience. That says a lot, I think, about Knepper’s charisma and acting skills. Can’t wait to see him on SGU!

I put up with Season 4 of Heroes based only on the fact that Knepper was there. His inclusion in Universe in inspired. I am very happy about this.

after being more evil than Sylar ever wished, he better be the nicest guy ever…

from Heroes.. I don’t know him from any other shows and left a huge impression with me…

The point is you’re not supposed to like him, he’s a bad guy. Since I didn’t care for the Lucian Alliance in the other shows, it’s just another reason I don’t like this show. Even being the creative genius they claim to be I guess they couldn’t manage to pull off bringing back the replicators again. Looks like he’ll make a fine Lucian Alliance character.

Fantastic character actor and great news that he’s on the show. All the talent wants to be on the SGU train.

He’s a magnificent actor who I think will greatly increase show’s quality. Or at least make it more fun to watch – I hope…

Cool. He will make a good bad guy.

He’s a fantastic antagonist actor, that’s for sure.

Unfortunately, his character is being completely wasted as a Lucian Alliance spy or whatever… ugh. Congrats to Knepper on getting the job, I just wish it was with a character who had a more reasonable role than some rehashed Lucian Alliance silliness on Destiny. Hopefully with all the feedback they’ve gotten so far over Season 1, they can somehow make that work out… but man.. doesn’t give me hope.. Lucian Alliance?? blah..

You haven’t even seen his character yet.

oh man i was hoping Sam Witwer would be on SGU

Screw bringing the replicators back.

SGU is supposed to be in some other Galaxy how the heck does the Lucian Alliance tryes to get a Foodhole there? Maybe the lost Tribe Asgards were not strange enough….

Why in the World must we use old Enemys at all??

I like Knepper, but didn’t get into Prison Break and bailed on Heroes long before he joined. As others have pointed out, not terribly fond of a rehashed Lucian Alliance plotline. It seems impossible for the writers to sever the umbical cord to Earth or the Milky Way, and alas, any of the villians they createad. Willing to bet we’ll see Replicators soon ;)

I can’t stand this guy on Heroes. Hopefully this character is drastically different.

Robert Knepper was THE reason to watch Prison Break. He is an incredbile character actor. Check out his work on Carnivale. He’ll be great on SGU.

http://www.cinemaspy.com/article.php?id=3078 Quote from Brad Wright: “One thing we decided, in our pursuit of realism, was to step away from rubber-faced, English-speaking aliens, and you will see none of those in the new show,” Wright said. “We will run into aliens. They’re just not going to be human, latex-faced, English-speaking aliens.” The Lucian Alliance members are human, English speaking aliens. Sadly enough they aren’t even rubber-faced, which would make them more alien and more intersting. TPTB promised to have only truly strange aliens on SGU, but still they decided to reuse the lame Lucian Alliance from SG1. Couldn’t they be a… Read more »

Perfect guy for the job. By the time hes done with his part, everyone (the fans) will think Rush is not that bad at all. Knepper, although a great guy in real life im sure, knows how to play bad guys to perfection.

At least they are casting temporary quality actors.

@ Tanith
and yet they are still resorting to rehashing old human english speaking enemies for extended storylines.

They still use for many episodes English speaking, human looking like aliens and they promised that they wouldn’t do it. I read some spoilers and I really got the impression that we will probably see MUCH MORE about the Lucian Alliance in the next 20 episodes than about the aliens in your link. And don’t forget that the Destiny is countless galaxies away from the Milky Way, which make using old lame Milky Way aliens even more uncreative.

Finally! SGU has an actual villain (or someone who at least comes into direct conflict with the crew). This raises my hopes. With that said, I do not know how and why the Lucian Alliance is being used in SGU. TPTB could have created a new enemy or used an already existing, but more terrifying, enemy to attack the Icarus Base. After seasons 4 and 5 of Atlantis where the Wraith were dying in one hit, I don’t see how gangsters are all of a sudden powerful enough to do so well against a fully armed military base with a… Read more »

Awesome!!!! I loooooved him in Prison Break and Heroes. He has charisma that you can’t ignore. I’m anxious to see him talk techno babble in a sci-fi series.

Now if only there was techno babble in this series.

Lucian Alliance all the way out there? I don’t know what I think about that. Wasn’t a fan of how they used the Lucian Alliance the first time. Maybe it will be better?

sgbandnerd, afaik the spoilers and rumors suggest that the LA will arrive at the destiny in a modified Goauld cargo ship.

I wouldn’t count on it being better.

Uh, no I think you’re wrong about that. I believe that they will gate in because were able to see Kiva stading infront of an open wromhole as a person shot through the gate, just like in Air.
I think you got the cargo ship from the eighteenth episode Subversion, where Kiva is supposed to be torturing Rush who is in Telfords body, on board a modified cargo ship.

I love the choice and he is a very talented actor but, for some reason, every show he is cast in dies shortly thereafter, e.g. Prison Break, Heroes (is falling VERY quickly despite it being one of my favorite shows), Carnivale and Presidio Med… Maybe this guy is the “black widow” of the industry.

This guy has mastered the hart of playing evil. He also has his own fan base which is pretty large.
I am so looking forward T-Bag coming to stargate he will make the Gould look like amatours.

Lol, they are going to be laughing their heads of in Denmark.
“knep” is the F word and “Knepper” is the act – lots of lols when the credits come up *G*

I want to see Lucian Alliance. This would give SGU much needed relevance.

Looking forward to SGU to getting past the “Ship is Broken”.

I dont care that the ship is broken, but Stargate needs conflict other than interpersonal drama.