The second half of Stargate Universe‘s debut season arrives on July 27! MGM and FOX Home Entertainment have officially announced the new set and all its contents, and you can preorder it right now on Amazon.com on Blu-ray or DVD

The 3-disc set features all 10 episodes from the current spring run, from “Space” through “Incursion, Part 2.”

(See the press release on the next page for the full list of featurettes.) The Blu-ray high definition edition includes SGU: Survival Instinct, a new interactive game. Both editions include the same list of bonus featurettes. 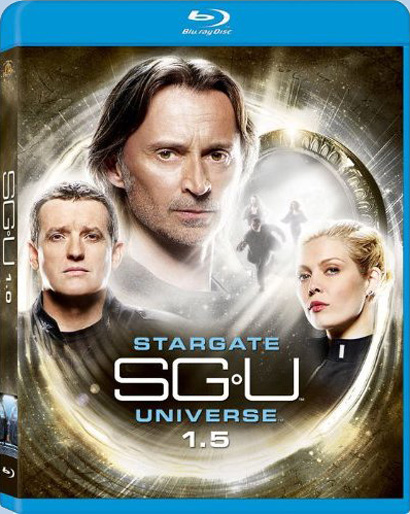 Video is presented in 1.78:1 widescreen anamorphic format, with English 5.1 DTS HD Master Audio for the Blu-ray and 5.1 Dolby Digital for the DVD. Subtitles are in English, French, and Spanish.

Many retailers will further discount from the SRP, of course. As of press time, Amazon is currently taking pre-orders at 25% (Blu-ray) and 27% (DVD) off.

As we previously reported, for you hold-outs MGM and FOX are also planning a Complete First Season set with all 20 episodes (story). That will be available sometime in 2011, according to a blurb in the Official Stargate Magazine. But if you already have Season 1.0, the new release will also come with a special sleeve to combine SGU 1.0 and 1.5 into a single, complete set.

Order SGU Season 1.5 now at Amazon! You’ll lock in the current discount, and help to support GateWorld at the same time.

(Thanks to Madwelshboy, Rob and Ben for the tip!)

I think I’ll just wait for the full season. or until both halves are really cheap.

I’ve never been a big fan of these half season releases i got burned with BSG season 2.0 and 2.5 because i didn’t read the box correctly

While the studio listening to fans may have been a factor, I suspect that the poor sales of the previous release played a substantial role in the studio’s decision to cut the blu-ray asking price nearly in half.

I’ve already got the first part so I’m so excited to get the second half, but it’d be great if they’d just release a full season at a time :)

This series is already a mile ahead of Atlantis. Hopefully it can continue down the road it’s on and move closer to familiar galaxies as it does. I don’t think I can enjoy the show if Destiny doesn’t return home before the end of the series. Nice price for the Blu-ray set, definitely picking this up.

Hardly a deal from MGM…

I think the reason that 1.0 did not sell very well is that it was not very good.

Already have (and love) the 1.0 edition so I’ll picking this up as well. Nice to see some of the supporting cast getting some interview time. Will probably get it on blu-ray as I have the first half on blu-ray. Good to see they dropped the price down though.