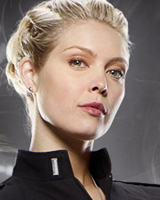 Kelly portrays a Syrian government official who becomes embroiled with the charismatic archeologist and treasure hunter Jack Hunter (Ivan Sergei/Jack and Jill). Battling gangsters and dark magic, Hunter is on the trail of unknown secrets and rare artifacts that could change the balance of world power.

Jack Hunter was filmed on location in Egypt, Turkey and Syria.

Warehouse 13 has just kicked off its second season on Syfy, and airs Tuesdays at 9/8c.  Stargate Universe returns this fall.