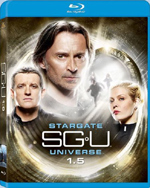 Ready to own Stargate Universe? Season 1.5 is out on Blu-ray and DVD

The second half-season set includes three discs with episodes 11 to 20 of Season One (that’s “Space” through “Incursion, Part 2”), which aired this spring.

Cast and crew commentaries on all 10 episodes

The Blu-ray high definition edition includes all of this plus SGU: Survival Instinct, a new interactive, “choose your own adventure” style game. Play a demo now at MGM’s official Web site.

Video is presented in 1.78:1 widescreen anamorphic format, with English 5.1 DTS HD Master Audio for the Blu-ray and 5.1 Dolby Digital for the DVD. Subtitles are in English, French, and Spanish.

to complete your collection. The 1.5 release comes with a special sleeve to combine SGU 1.0 and 1.5 into a single, complete set.

A full-season release is expected in 2011 (story), but based on the studio’s history will probably not include any additional material.

Over in the U.K., the first season is now available on Blu-ray

as a single release. Order it now at Amazon.co.uk

Amazon is currently offering Season 1.5 for $29.99 on Blu-ray and $19.99 for the DVD edition. If you buy from Amazon, you’ll also help to support GateWorld!

waiting on the full set

Pre-ordered it through Amazon, and got it today. Love it! Don’t regret a penny. The special features are great, the new kino scenes are really touching (and one of ’em’s hillarious). It even has this fold-out full-season box you can put the two half-seasons into with a REALLY cool graphic.

Bought it in Toronto this morning for 24.99, on Blu-Ray! I was amazed at that price :D and its a freakin’ awesome set too.

Couldn’t buy it if I wanted too, having no money and no job— not to mention strange failing health. Would I buy it If I could? Of course I would, I bought Caprica and two DVD’s of of Lost Tales B5; though it was still cancelled, so don’t count me out—though I had money and a job during both times :)

Sgu is nothink againts Atlantis or SG1 and why atlantis is no more,its unfare However,i not about it,all this Sgu without logic..
example: in first episode Sgu please explain me that,how deadalus class earth battlecruiser with Asgard techn. Energy weapon not eliminate 3 goul’d cruisers, or however their names.. Its onli one example..All episodes without fun,and adventures..without hummor i hope in feature it will be better xD bicouse now its a ,,little” strange

Stop releasing half seasons. I won’t pay twice the price for one season of material.

I have every Stargate DVD up to SGU, so I had 2 get SGU 1.0 & 1.5 even though I stopped watching the show abt 1/3 way into season 1. Season 2 sounds somewhat interesting only cuz I hear that there’ll be many appearances from SG-1 & SGA characters

Grrr, the stupid “Season 1.0” and “Season 1.5” nonsense again. Stop treating your customers like idiots and you may get more sales. Firstly, everyone realises that the combined cost of two halves works out a lot more expensive than a full season package. Secondly, please drop the nonsensical 1.0 and 1.5 numbering scheme. Again, the entire world understands 1.0 to be the same as 1 and this is disrespectful marketing at best, a blatant con at worst. If you absolutely must release seasons in two halves, call them Season 1 Part 1, and Season 1 Part 2 like every other… Read more »