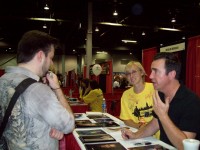 This past week, the Chicago area was privy to a barrage of sci-fi and fantasy celebrities — along with professional wrestlers and stars of the 1970’s — when the Chicago Comic Con took over the Donald E. Stephens Convention Center in Rosemont, Illinois.

The con was a massive event with something for everyone:  celebrities, cosplay, video game tournaments, movie screenings, and (first and foremost) comic book dealers.  Iconic sci-fi actors such as William Shatner, Avery Brooks, Linda Hamilton, James Marsters and more took part in the event.  And nestled in a booth between a wrestler on his left and models on his right was Stargate Atlantis fan favorite Paul McGillion (“Dr. Carson Beckett”).

GateWorld made sure to take the time to chat with Paul during the few free minutes he had that weekend — where we learned more about his role in the short film “A Fine Young Man” [story] along with what else he’s up to these days.

GateWorld: How has the Chicago Comic-Con been for you so far, Paul?

Paul McGillion: It’s fantastic, Chad!  It’s a blast.  I love Chi-town.  It’s great!  I had the deep dish pizza last night.  The fans have been terrific.  It’s been really busy!  I’ve seen a lot of familiar faces from Battlestar Galactica here and stuff.  It’s been great.  A lot of people that I haven’t met before.  It seems like its a huge event and its really successful.  So I’m happy for them!

GW: Are there any celebrity guests that you’ve seen that you’re still awe-struck about at this point in your own career? People where you just go “Hey!  Wow!  It’s him or her!”

PM: I saw the Honky Tonk [Man] over there, the wrestler!  [laughs]

That was pretty cool.  Meeting “Peter Brady,” Christopher Knight is over across the way.  I think Lou Ferrigno is here.  There’s just some very interesting characters here, for sure.  People you grew up watching as a kid.  And then some of the iconic characters like [William] Shatner and those guys.  So its a neat environment to be part of.

GW: Give us some details on “A Fine Young Man”.  The trailer is up on GateWorld, and we get to see you briefly in it.  But there aren’t a lot of details it gives away.  The voiceover in it, however, makes it seem like this may be darker fare then what we are used to seeing you in.

PM: Absolutely!  It’s a really interesting script.  A terrific young filmmaker, Kevan Funk, from a film school up in Vancouver.  He’s a real talent!  He just broke out a fantastic, terrific concept and a script that we really loved.  My good friend Wesley Salter [Eureka, Supernatural], who I went to high school with, is in it.  It’s just really great.

It’s complicated.  There’s government espionage, to a certain degree.  I can’t give the ending away!  It’s a short film!  I think it’s really dark and twisted.  But I’m thrilled to get into the Toronto Film Festival.  It’s amazing.  And the film has been getting great reviews from the other film festivals as well that we submitted it to.  So I’m happy about it.

It was an interesting project to work on.  It’s a circa-1962 piece. I play a government agent, “Barton Grant.”  Wes Salter plays another agent, “Bill White”.  And they are recruiters, so to speak.

McGillion acts as both co-star and producer in "A Fine Young Man."

GW: Is it nice having a role with darker overtones?  Something other than the genre work we are used to seeing you in?

PM: Working on Stargate for so many years, it’s nice to be part of the sci-fi genre.  Vancouver has a lot of sci-fi.  And I’ve been fortunate enough to be on a lot of sci-fi shows.  They kind of call it “sci-fi central” up there, in a lot of ways.

But working on an independent film is something I will always love to do.  And producing!  I’m a producer on this.  It’s a neat role.  It’s dark.  But at the same time, there’s layers.  The character is very layered.  It was just really interesting to play.

GW: Anything else you’re working on currently that we may be able to see you in upcoming?

PM: I’m doing a pilot right now with Jesse James Miller, Michael P. Northey and Ivon Bartok.  Ivon is heavily involved with the Stargate franchise, too.  We’re hoping to shoot  in November, so we’re pretty excited about that!

GateWorld will be there, so keep your browser locked here throughout the weekend and next several days after as we bring you the latest franchise updates!

Very much liked your podcast with him back in the pre-SGU days. Recommended.