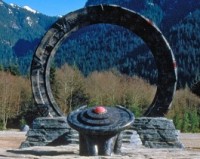 Propworx has announced the time and place of their first official Stargate live auction.

The event will be held Saturday and Sunday, September 25 and 26, 2010 at the Science Fiction Museum in Seattle, WA, according to a news story published on their Web site yesterday.

A special Preview Day will take place on Friday, September 24.

The auction is the first in a series of two events featuring content from both Stargate SG-1 and Stargate Atlantis. More than 850 lots of props, costumes, set decoration and original production art will be featured at this first event.

Easily the most prominent piece in this sale will be the SG-1 travel Stargate (pictured above), seen in countless episodes on-location. This lot will not include the DHD.

Stay with GateWorld in the coming days for an exclusive first look at several auction items which will be available for purchase at this event! Meanwhile, Week 30 of the Propworx eBay auctions is going on right now.

I want that stargate!

Anyone half half a million dollars to spare for it?

I want it more!

hmmm that would be one epic birthday present. Even if I had the money, I have no where to store this. Although if I had my own house it’d make a good garden decoration.

Omg, they started to sell the Asgards! D:

i wonder if people are still optimistic about those movies?

How [email protected] would that be to have a stargate as your lawn ornament! Can’t be a good sign for the movies if they are selling EVERYTHING

I am sorry to say I find all of this really depressing. A staff weapon here,a Tokra costume there is one thing. But the offworld Gate? The SGC conference table? I know the films are ready to go, but surely it would be cheaper to keep large key set pieces that stand a chance of reuse like these, than spending more money on replacing them? Assuming they will be replaced. I keep thinking, “How long before we get the awful news that the the remaining SGC / Atlantis sets are struck?” grif – I am normally an optimist, but I… Read more »

I’m not optimistic about the movies. But people that are shouldn’t be discouraged after hearing this. I mean, they can make 3 stargates with the money they get selling 1!

So many good shows are really tied to a period. That period may stretch for up to 10 years but eventually the actors natural aging changes the dynamic and the entire nature of the show. Star Trek TOS and the movies The X Files and the movies (dumb story the 2nd) And Stargate. I love Stargate, but if we have to use the paddles to revive it, would we be happy with the end result? Atlantis is on the clock. I would like SG-U to learn some humor from SG-1. It was so subtle and funny! I would worry about… Read more »

Wow, if I had that Stargate I’d bury it somewhere just to mess with the heads of archaeologists i years to come !

I know MGM is in receivership and they are the license owners of the Stargate franchise, but selling such iconic pieces – does this not mean they’ve gone too far?

I think any prospective movies are now nearing the guillotine, and SGU will most likely be the shortest of the seasons yet.

This is a great day for those rich enough to steal these iconic pieces away, but it’s a double-edged knife, one that’s now in the back of Stargate :(