“I would say I was probably 20 before there was any notion of acting in my life,” Carlyle said. “I had enjoyed going to the movies as a kid. My father loved movies, you know. I could see any film as long as it was a western. So, I loved all of that.”

Carlyle began his journey by joining a local theater company. “It was more of a community center,” he told us. “Community drama. It had to do with discovering yourself, I suppose, and devised pieces, and improvised sessions and stuff like that. It really opened me up as person, first off, before an actor. I was very shy. I wan an incredibly, painfully shy boy, and at that time I would go red, even at 20, I would literally go red if somebody spoke to me. So, drama was vital for me, even just in life as a person, never mind going into it as professional actor.

“It worked in spades, you know? I suddenly found myself as part of this community, a whole new bunch of friends, people who I kind of understood suddenly, and they understood me. It all kind of came together. I did that for maybe two or three years, and then I went to drama school — the Royal Scottish Academy of Music and Drama in Scotland.”

When discussing his first big break as an actor, Carlyle said that fans and critics often disagree about which role set him on the path to becoming the A-list actor he is today. Some critics “say obviously it’s Trainspotting that did it for you. Or they’ll say it’s obviously The Full Monty that did it for you. And later they’ll say it’s obviously when you did Bond. That was you established. I keep saying, no, you need to go back farther than that, because everything leads on to the next thing.” 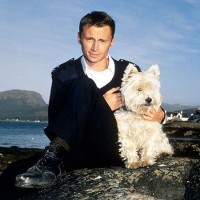 Carylye stars as Hamish Macbeth in the BBC Scotland series (1995-97).

Carlyle actually credits early television work for moving his career forward. “I think it’s a piece I did called Cracker, which was on U.K. TV,” he said. “I think they remade the show in the U.S. — I think they called it Fitz. It was a wonderful show back home, in Britain for sure — Cracker. On the same lines as Prime Suspect and that kind of stuff. Robert Coltrane was the main guy.

“I played a guy from Liverpool (I hadn’t played anything outside my own voice at this point), and when I played this part it was very successful.  It went very, very well, and people thought I was from Liverpool. And that’s what went out, that I was an English actor. Perfect. Because it was very difficult for Scots to get the work. And I did maybe two or three other things after that in accents.

“Eventually I spoke in my own accent in a piece called Hamish MacBeth. Hamish MacBeth was a little cop show back home in the U.K. that went through the roof in terms of ratings. People really enjoyed it. And suddenly it was there. They went: ‘Wait a minute. He’s Scottish! How did he get in?’ But it was too late by then.”

Carlyle’s journey as an actor continues this fall with Season Two of Stargate Universe, and also the forthcoming video game Castlevania: Lords of Shadow, in which he co-stars with Star Trek: The Next Generation and X-Men star Patrick Stewart.

Wow. He looks REALLY young & different in that pic. And the dog is cute!

I really liked him in The Full Monty, although haven’t seen any of his other roles.
Guess time will tell if joining the SG universe was a good career move?

Actually the American Version of CRACKER was called “CRACKER” over here in the States. The US version was called “FITZ” over in the UK. I urge everyone to check out the UK “Cracker” episode, “To Be A Somebody”, Robert is STUNNING!!! And I am addicted to HAMISH MacBETH, GREAT SERIES!!!!!

Geeeze people, anyone see Hitler: Rise of Evil? Takes a lot of guts to take that one on. Especially since, as far as I know, Hitler wasn’t a Scots.

I was cruising on Netflix a week or two ago and I a picture of a younger Robert Carlyle. I immediately put it in my Que. It was Called Monroe: Class of ’76. In the IMDb it is listed just as Class of ’76. It is a crime/drama/mystery/thriller which is very “British” and does move slowly in the first half. However, the story overall is interesting and keeps you guessing a bit. But the real fun is watching Mr. Carlyle’s nuances in his performance. Also, he had a role in the Kiefer Sutherland made for TV movie 24: Redemption. This… Read more »

Carlyle is awesome. He’s like SGU’s answer to RDA back in the early days of SG1 in terms of the established actor who could carry the show on his own.

I’m stoked for more Rush in season 2. I can see … oh screw it. I can see a Universe of possibility in Rush’s character.

Robert Carlyle was brilliant in Hamish Macbeth, he was young there and I fancied him like mad!! and everyone loved wee Jock the West Highland Terrier, A must see film is The Full Monty for all Roberts fans it really highlighted the problems the mine closures caused over here in England and how those men overcame the hard situation they were put in but a great film that wouldn’t have been the same without Robert at the lead.

One of my favourite actors! “Trainspotting”…”The 51st State”…”28 Weeks Later”…”The World Is Not Enough”…”Gunpowder, Treason, & Plot”…all amazing to watch and all showing a wide-variety of Robert Carlyle’s acting talent! When I heard he had been cast in “SGU” I was surprised and completely overjoyed at the news! It’s been brilliant seeing him as Nicholas Rush and I can’t wait to see more of him as this character in Season 2 next month!

Mr. Carlyle is one of the most underrated and best actors out there. I’ve seen everything of his except for a couple very early tv performances that are impossible to find. But from his ‘working man’ in ‘Riff Raff’ to his determined bus-driver in ‘Carla’, his gangster in ‘Face’, his tender lover in ‘Priest’ and his ‘bad boy’ in the Full Monty, Mr. Carlyle shows a remarkable range and incredible subtlety of expression and emotion. I’m enjoying the hell out of seeing him on ‘regular tv’ in Stargate, and urge anyone reading this to seek out his older movies and… Read more »

He is a superb actor, but im maybe biased because im Scottish.

I was delighted when he joined SGU, a brilliant actor from my homeland, who joined my fave program.

I actually met Robert at the Edinburgh festival a good five or six years ago, got my photo taken with him and an autograph.