GateWorld: I would almost go so far to say as that she silently bears these burdens that are thrust upon her for whatever reason.

Alaina Huffman: Yeah. And she has that struggle. “I can’t do this!” A lot of self-doubt. But very capable. As Season Two progresses, you see that she’s less of that. Still vulnerable, I think. You still see those character traits. But less in terms of her worth.

GW: Looking back on Season One as a whole, what would you say are some of the highlights? Both for the character and for yourself as an actress. [Perhaps] some of the things that you hadn’t had a chance to do prior… 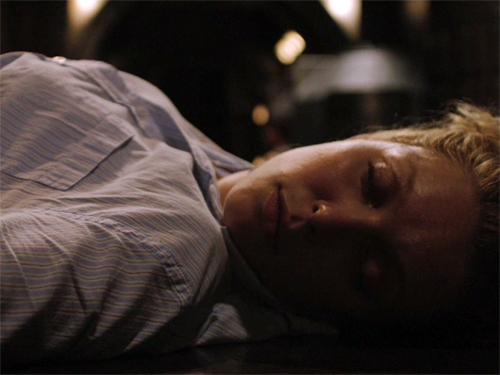 T.J. doesn't end the first season well, with a bullet in her abdomen. From ''Incursion, Part 2''

They have some hardships in Season Two. All of them. And they deal with their circumstance in a different way. And because, again, we’ve developed the characters and their personalities, we’re able to play on that. We’re able to play with each other and off of each other.

GW: The last couple minutes of “Incursion, Part 2” leave some particularly brutal plot points, especially for T.J., in the air. When I talked with Brian, David and Elyse in April, they kind of warned how much of an exclamation point it would put on the end of the season. What were your thoughts when you saw the script?

AH: Well, you know there’s going to be a cliffhanger! It’s the season finale! It just keeps you on your toes.

GW: To be continued …

AH: Yeah, to be continued in the aftermath of the first few episodes of the season. I thought it was a great season finale. Also, Andy Mikita directed. He knows Stargate like the back of his hand. He knows how to get the exciting moments and the elements that the fans love. And that the writers are so great in crafting.

GW: David in particular was talking to me about how happy he was with how it was shot and that Andy did a fantastic job.

AH: Yeah! We love Andy. Andy’s just an all-around great, great guy. We’re really, really fortunate to have the team that we have. I’ve said this many times. It’s very special to be on a show where you know that your creatives are literally over in the next room. You walk up to the office to get a snack, or make something to drink, or send a fax and they are sitting right there and you can chit-chat with them. That’s rare in this business, so it’s very, very nice.

GW: And when you figure that most of the people working on this franchise have been here anywhere from five up to thirteen years, it gives you an extra added amount of faith that they know where things are going …

GW: … and faith that what you’re doing, and the work that you are doing … that it is quality.

AH: Absolutely! And that they love it. There are television producers and there are people who make television.

GW: And there is a difference.

T.J. and the rest of the crew will settle into life on Destiny more in Season Two. From ''Intervention''

GW: You’re about halfway through production on Season Two at this point. Be as vague as you need to be … but what type of themes can we expect to see come fall? A big theme for Season One was “These are the wrong people in the wrong place.” Is that going to continue to hold true? Or will some of the characters begin to embrace the realities of the situations they are in?

I think the sense of “We’re not supposed to be here” cools down a little bit. And it does become about — Okay, now that we’re here, let’s roll up our sleeves and dust ourselves off and get on with business. We’re still trying to get home, of course. That would be the end of the show if we weren’t. So we still have the action packed “what’s going to happen” at the end of the episode. And that’s what everyone loves about Stargate! We meet a lot of aliens. That’s a lot of fun. We see a few new ships. There’s a few new sets we have built. A lot of guest stars. Some really good stuff. I think the fans will like Season Two.

GW: Again, to be continued because we can’t know any of that. [Laughter]

GW: Any message you’d like to send to fans of Stargate that can’t be here to see you in person? Or ones that may in the future but haven’t had a chance to yet?

AH: Yeah! I’m loving the convention circuit! Like we were saying, this is my first convention with Creation, and I’ve got a few more scheduled this year. And some other ones, as well.

I think it’s such a great opportunity to meet the fans, and to listen to them as well. To listen to them and hear what they say. I love being on Twitter. You can follow me on Twitter: @AlainaHuffman. I have my little YouTube channel vlog that I’ve been doing, and the fans really seem to like it and I’m having fun doing it.

So, yeah! Come on out to the cons! All of us are pretty on-board with it. I heard that Papa Smurf, Louis Ferriera is interested in them, too, so … Quite a few of us have already been doing them. Myself, Elyse, Brian, David and Jamil. And now Louis seems interested. And Lou [Diamond Phillips] has done some as well. So come and see us! [laughter]

Interview and transcription by Chad Colvin