With the countdown to the premiere at just 13 days, Syfy Channel has released story details on the first episodes of Stargate Universe‘s new season!  Season Two picks up right where “Incursion, Part 2” left us hanging in June, with the Lucian Alliance poised to take over Destiny and most of the crew either shot, about to be shot, or stuck outside an airlock with radiation from a deadly pulsar about to hit.

Watch out for significant SPOILERS in these summaries. If you’d rather not know what is coming, turn back now!

… Still there? You’re sure, right? Well then, here’s how the network describes the episodes: 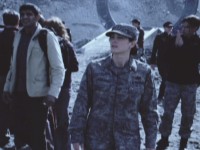 Control of the Destiny hangs in the balance as the battle continues between the crew and the Lucian Alliance.

Colonel Young and most of his military personnel are held at gunpoint by the Lucian Alliance. While Dannic has no hesitations to kill them, he is convinced by Varro to leave them on the nearest planet. Shortly after arrival the Destiny crew find themselves joined by Varro and those of his men now deemed as traitors by Dannic. When a deadly electrical storm begins to brew, all must work together to find safe shelter and survive.

Meanwhile Dr. Rush, Brody, Chloe and Eli have sealed themselves off in the hydroponics lab and have managed to obtain some control of the ships power. Dr. Rush conceives a risky plan to force Dannic and the Lucians to surrender by draining the power from most of the ships shields killing anyone outside hydroponics by radiation. Not willing to give up, Dannic locks into a standoff with Rush knowing his plan will also kill those members left aboard not protected by the lab. Chloe and Eli plead with Rush to think of Lt. Johansen who’s trapped in the infirmary recovering.

NEXT: A crash-landing on “Aftermath”

Awesome! Can’t wait! I wonder what they find on the seeder ship.

“they discover there’s more aboard the ship than just power.”

What a classic line, yet never fails to make you go “ooo” like i did haha.

What I would really like that line to end up meaning is that there’s an Antlantean on the ship in some form. It sounds more like it’s going to be some sort of hostile alien species, but I think it’d be pretty neat if it turned out to be some early Atlantean awoken from stasis, clone, or however they wanna do it. That or friendly (or at least non-hostile) aliens would be pretty cool and more unexpected than more evil aliens I think. Then again, it might not be a life form of any kind so we’ll just have to… Read more »

These all sound awesome! But I think you meant the first episode picks up where -Incursion- Part 2 left off, not Intervention :P

Wow oh wow oh wow! These three opening episodes sound fantastic! So much going on! I think SGU’s second season is going to be getting an amazing start and I’m sure that all the episodes that follow will continue that way! Cannot wait!

i am so ready to watch this right now!

[…] Via: Gateworld Beware! Here be spoilers! Come no further if ye be afeared! • READ: INTERVENTION: Control of the […]

Sounds awesome (though Intervention reminds me of a story done early in Star Trek: Voyager where Seska and her alien buddies stole Voyager and left Janeway and crew stranded on an alien planet). Awakening though is the one that has me most excited.

[…] I understand some fairly detailed (read: spoilerific) synopses of the first three episodes – Intervention, Aftermath, and Awakening – have found their way online.  If you really have to know – https://www.gateworld.net/news/2010/09/new-details-on-stargate-universes-first-new-episodes/ […]

I’m happy to have my wish come true. I said in one of the forums that a seed ship should be in season 2 and there is, great news.