GateWorld: What are some of your favorite moments from Season One? Either on-screen or off. It doesn’t even necessarily need to be in regards to your character. It could be a high point in your mind for the series. Or even just something going on in your life while you were shooting.

Ming-Na: I think one of the highlights for all of us was seeing the Stargate for the first time. On Destiny as well as on Icarus Base. That and being able to go through it and do scenes where we go through it. I think each actor’s first time was probably a special moment for all of us.

I also think, most importantly, having the ensemble and all the writers just kind of gel and become this kind of tight unit, where we’re all so comfortable with each other. And we’re able to start playing and working with these characters. And making this show a new Stargate instead of just an off-shoot of the previous two series. The fact that we can stand alone if we need it to. I think those are really special moments for me, anyways.

And I love Robert Carlyle. And Louis [Ferriera]. David [Blue] and Elyse [Levesque]. I mean, the whole gang. I love ’em. They are a special bunch. And the crew is amazing.

GW: And many of them have been at it for as much as 15 years. So they know what they are doing. 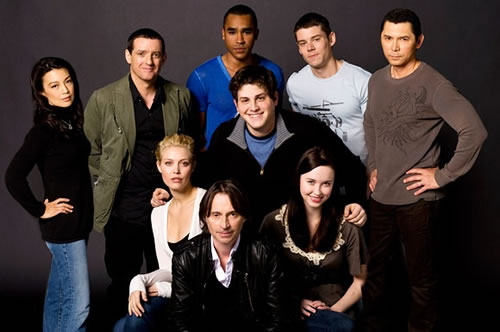 The cast members of SGU hold a special place in Ming-Na's heart.

MN: I think there is such a great advantage for us in that the production office runs so smoothly and be so familiar with each other. It’s great.

GW: We’re a short time now from the premiere of Season Two. And I’ve had a chance to view “Intervention.”

MN: What did you think? You know what happens!

GW: I do! “Intervention,” in my opinion, is a stellar episode and a great start to the season. In your mind, what are some of the themes throughout this year? If Season One was “These are the wrong people,” and having them learn there’s no quick fix and they might be in this microcosm for awhile, will Season Two become more about them learning to live their lives in the new reality they are finally coming to grips with?

MN: I think so. I think they are getting to the point where they are like, “This is the way it’s going to be.” And they are getting out of the subconscious denial of it — realizing that if they are going to continue to truly live, then they are just going to have to move on. I think we all sort of come to an acceptance of our … “destiny.” [Laughter]

They make the best out of the situation. And just like any other work environment, it’s going to be hard from time to time. Especially when those damn aliens show up! Do you know how much fun my job is, Chad? [Laughter]

MN: I mean, seriously! I stand there on the set, especially when there is a green screen and we have to pretend there is a spaceship or something approaching us. Or we’re looking out into another planetary system. I’m always like, “Wow!” When I was watching Star Wars as a little girl, I dreamt about being in outer space. And in a way, here I am!

MN: Oh, yeah! Always! Still do. And I’m passing that gene down to my kids.

GW: How much of an influence is Wray going to have on Destiny this year? Is it still going to be business-as-usual for her?

MN: You know, there’s a reason why the word “human” is in Human Resources. My sister-in-law is one, and I talked to her about it. Sometimes they are just misunderstood as the bad guys. But in reality, she hired all these people. Because she believed they were able to do their jobs and they were the right people for their jobs.  So she knows them. And she may know secrets about them.

But I think you start to see that side of her working, where she wants to make sure that everybody is still capable of functioning. I think there’s a great deal more warmth that comes into her role as leader of the civilians, for lack of a better title at this point. Nobody really has the titles they did on Icarus Base or on Earth. 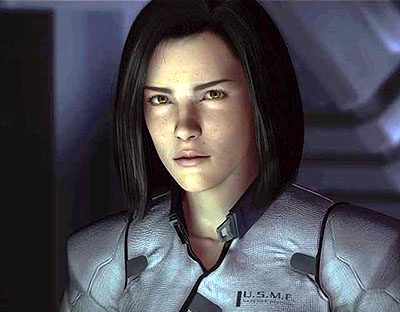 GW: Have you thought about jumping into the convention circuit at all? You did Comic-Con …

MN: Yes, because I had to! [Laughter]

GW: Brian, Elyse, Alaina, and David have started to hit the conventions a bit. Is that something you’re interested in, or are you going to hold off a while?

MN: I’m going to hold off a while. It’s not because I don’t want to meet the fans. It’s something I would love to do. That’s what I loved about Comic-Con. It was so much fun doing the panels and getting to hear what everyone had to say.

For me, it’s really because I’m spending so much time in the air now. I fly literally once if not twice in a week. So the idea of getting on another plane for a quick weekend jaunt is really tough for me to wrap my brain around. Especially because it’s more time away from my family.

But maybe next year. I might consider a few just to get a taste of it. And join my other co-stars and have some fun.

GW: Have you been working on anything else? You were in a summer hiatus from filming from the end of June until the first part of August. Did you get a chance to engage yourself with any other projects? Or did you just take the downtime to enjoy being home as a wife and mother?

MN: I was home mostly. You know, unless a major project comes along …

MN: Yeah! You let me know when that’s in development! I’m going to jump right on that!

MN: I’d love to start looking. My kids are a little bit older now. But it’s all about timing.

GW: Any message for fans? Either of SGU or fans of your work in general who have followed your career over its span?

MN: I’m just so thankful for them. And grateful. I love hearing from them on Twitter. They are all so incredibly supportive. That’s what we are all doing it for, and that’s why I love theater. We’re there for the entertainment. We’re there to entertain the people. And if they are entertained and they like what we do, then it’s very rewarding.

I just really, really appreciate and love them very much. Including you!

MN: There was actually a couple of times when I was going through customs …

MN: It is when the customs people are SGU fans! [Laughter]

Interview and transcription by Chad Colvin

Really nice! Wray is a tough character for me. I think Ming Na has done excellent in portraying her, I never think “Oh here is that Ming Na again” its always “Oh no, Wray…” … I wish her character had a little more screen time though, she still seems kinda hollow and I think that’s why I’m not the biggest fan. Although, I’m re-watching the season and so far all the characters seem better to me, I think the initial shock of being so different than SGA/SG1 was distracting, but knowing what to expect the second time around made it… Read more »

Lovely interview. It’s great to hear that Ming-Na likes sci-fi! So few actors do..I guess her comment about custom people in Vancouver being SGU fans is something worth remembering :D