You can’t help but admire the work ethic of actor Christopher Heyerdahl. Since his initial appearance as Pallan in the Stargate SG-1 Season Seven episode “Revisions,” Heyerdahl has shown up in two different roles on Stargate Atlantis (Halling and Todd, the Wraith), and is currently juggling two concurrent roles on Sanctuary.  Add to that guest spots on series like Supernatural and parts in blockbusters like The Twilight Saga:  New Moon, and you begin to see just how much the actor can multi-task.

GateWorld caught up with Christopher when he was a guest at Creation Entertainment’s Official Stargate Convention in Vancouver earlier this year.  In our discussion he discusses his feelings on a longer Sanctuary season (20 episodes, up from 13), what we can expect in Season Three of the series, the Atlantis cancellation, conventions and fans, and much more!

GateWorld’s interview with Christopher Heyerdahl runs 17 minutes and is available in audio for your easy listening.  It is also transcribed below!

Christopher Heyerdahl: You too. Cheers!

CH: Life is great! I finished shooting at 2:30 in the morning last night, we’re just in the middle of the fourth episode of Sanctuary.

GW: Congrats on that huge pick-up, too.

CH: Thanks! Yeah, 20 episodes. It’s big. It allows for so much more. Previously, we’ve basically been doing these very small story arcs, with the constant of the Five and the whole history there, and now with 20 it gives the writers — and we have a couple of new writers on board — the opportunity to really look ahead and create a major, major story arc. It’s exciting. 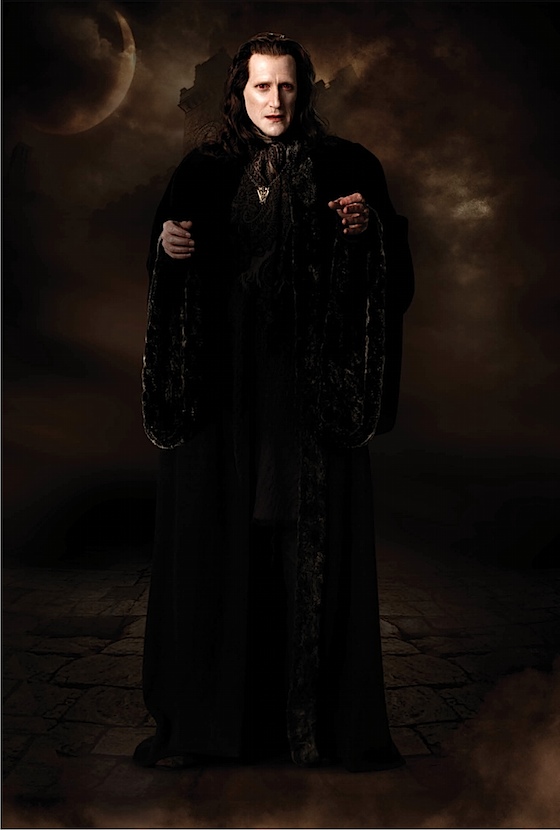 Heyerdahl as 'Marcus' in 2009's The Twilight Saga: New Moon

GW: Something to look forward to.

CH: Yeah. I don’t think they have any idea where they’re going now, so it’s going to be fun to see how things unfold.

GW: 2009 was a huge year for you, between Sanctuary, Supernatural, New Moon that you were in. How fulfilled do you feel from that, from an actor’s standpoint? Being able to be all over the place and be seen in so many things?

CH: It’s funny, there’s two sides of the way that my career has gone. I’ve enjoyed staying out of the limelight. I’ve done all these characters that are unrecognizable. I walk down the street and nobody knows who I am. I’ve really enjoyed the anonymity of that. So it’s another adventure to make the choice of going into something that gives you so much more visual recognition.

It’s new for me, it’s kind of fun. I haven’t been recognized at all yet for New Moon which is definitely the biggest bang.

GW: Was there a part for you in Eclipse at all, or not?

CH: No, because they’re following the books. The Volturi — at least the old-guard Volturi, the guys that are running the ship — are back in their baths being massaged by Italian tourists just before they eat them. So they’re not there. It’s just the boys that they send off, the errand boys are off doing the thing back in Forks.

The triumvirate comes back in the final battle in Breaking Dawn.

GW: Hopefully we’ll see you there.

GW: Over the years, Todd the Wraith gained quite the fan-base. When the announcement of the cancellation of Atlantis came, were you surprised at all?

CH: I think I’m more surprised when [they] renewed [rather] than canceled. It’s something to be celebrated when you’re renewed, and that’s always fun. Being canceled … it’s always a bummer not to do the character. I wouldn’t say I was surprised or shocked either way, really.

I would be surprised in as much that there was such a huge fan base. I was out watching and listening to [Michael] Shanksie doing his talk-back [at the convention] and one of the things that came out so strongly (I think his response was, “Do you people not understand how television works?”) was “Bring back Atlantis!” So from a fan standpoint, definitely, I’m shocked. From an actor’s standpoint, not so much.

GW: Are there any developments with the character of Todd that you would have liked to explore that never came to pass? He was always kind of a rogue element; you never knew whether or not you could trust him.

CH: I don’t think I would want to end that aspect of it. I think that’s what makes the character interesting. He’s unpredictable.

CH: Absolutely! That makes any relationship interesting, certainly one that comes and goes — not necessarily one to have hanging out on a daily basis, but that’s what makes the character interesting. I wouldn’t want to see that change.

The adventures could continue. It would be good to see him in a position of power for a longer period of time. I think we saw him come and go so quickly. You think the guy’s been around for whatever, 10,000 years. You see obviously he’s done some amazing things to survive that long in an extremely hostile environment. The Wraith are not exactly living a chill existence every day, so he’s got to be doing something right. So to advance and figure out why and how this guy could have survived so long would be pretty cool.

he was also in Highlander :)

Love Chris. He hit the nail on the head as to why the ratings are down for Universe – it’s hard to follow because you’re not always sure when it’s on. They’re either on hiatus or they change the nights. I know if it wasn’t for the Internet, I probably would be just as confused about when it’s on as Chris is. They need to air the season in August, run right through all 20 episodes and be done with it until next season, maybe taking a break for major sporting events or holidays here and there. I loved it… Read more »

I’m sure there are a lot of things that go into deciding how a season runs its course. Things like making an episode form start to finish (writing the script, it being okayed by standards and practices, actors reading through it, it being acted out, multiple takes, cutting, editing, etc), actors needing a break, probably a lot of exec room BS. That said though I wish the breaks weren’t so long (at least they aren’t BS:G long).

@Browncoat1984 – He said it was hard to follow several times before mentioning the scheduling issues and he said he did his youtubing when asked about watching it. He wasn’t saying that the scheduling was the main cause, he was simply focusing on that aspect as his career and any option of being in future Stargate works requires him to tread lightly on production choices.

Great interview! I really enjoy Chris and his incredibly wide variety of roles. Glad he is happy working on Sanctuary with “family.”

Great interview! I love Chris. I had the pleasure of seeing him in person in August at a con in Chicago, and he’s every bit as charming in person as you would imagine. I’m looking forward to Sanctuary bringing back Druitt and seeing what they do with his character.

Thanks for interview – love when you can download and listen. Feels it’s been a while since there were audio interviews. Chris seems to be a very nice person and he is a great actor. Hmm I better check back on the interview page again – maybe I have just missed the audio interviews… Have a good weekend!
the podcast junkie – aka daxmaryrussel :)

This guy is just awesome.

GO Chris! He is a brilliant actor, even in New Moon!