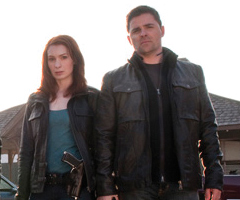 A couple of our favorite Stargate Atlantis actors are back on Syfy this month, appearing in two of the network’s new Saturday night creature features!

First up is Monsterwolf, in which Robert Picardo (“Richard Woolsey”) and co-star Jason London (Wildfire) battle a Native American animal spirit.  It airs this Saturday, October 9 starting at 9 p.m. (8 Central).  Here’s how Syfy describes the story:

An oil company defies a court injunction against drilling on tribal land. Their blasting releases the Kachinawaya, a Native American animal spirit meant to protect Indian lands from invaders.

Red (Day) brings her fiancé home, where he meets the family and learns about their business — hunting werewolves.  He’s skeptical until bitten by a werewolf.  When her family insists he must be killed, Red tries saving him.

It’s all part of Syfy’s annual “31 Days of Halloween” month, culminating in a live, 6-hour telecast of Ghost Hunters on Halloween night.

I want to see this, but only because Felicia Day is awesome!

Guess it’s all downhill for Stargate actors. These scify movies tend to be on the low budget and just plain crappy side of TV.