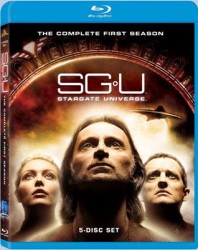 The first season of Stargate Universe is out on Blu-ray and DVD (Region 1 – North America) today!

Look for the “Complete First Season” release at a store near you — or order it online from Amazon, save a bundle, and help to support GateWorld’s continued existence with your purchase.

The 5-disc Blu-ray and 6-disc DVD sets combine the contents of the previous “Season 1.0” and “Season 1.5” releases, including all 20 episodes from the 2009-2010 broadcast year — from “Air” to “Incursion.” It also includes all of the Kino Webisodes, audio commentary from the cast and crew on all 20 episodes, and a ton of special features — profiles on all main cast members, interviews, featurettes on the show’s design, stunts, and much more.

See the full list of features here.  The Blu-ray high definition release includes the interactive game, SGU: Survival Instinct, and a long list of behind-the-scenes featurettes not available on DVD.

Season Two is now airing every Tuesday night at 9 p.m. (8 Central) on Syfy Channel in the U.S.  The new season also starts tonight on Sky1 in the U.K.

Does anyone know whether Spanish audio tracks are for Spain(Europe) or South America?

bought it yesterday. the worst stargate special features ever.

Dies anyone know what the sales totals are on the SGU blu-rays? Gotta be low.

I agree about Atlantis and blu-ray. They could make a good profit if they would release them in HD.

Not interested in SGU…. I really, really want SGA on Blu-Ray. As soon as Atlantis is available I will be there with my money!