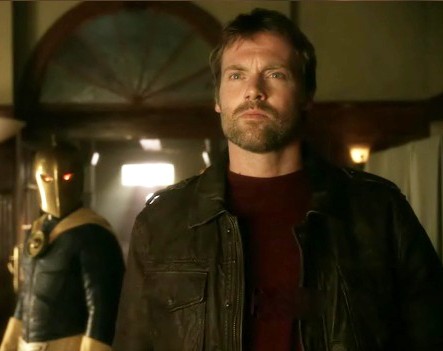 For the entire backhalf of Stargate SG-1‘s run on cable’s SCI FI Network, anyone wanting to catch Michael Shanks on their televisions knew that the place to find him was on Friday evenings.

Many things have changed since then.  SG-1 ended its run in 2007.  The SCI FI Channel rebranded itself as SyFy.  And Friday evenings in prime time on the network — once its designated area for its hit shows with the strongest ratings — now belong to Vince McMahon and the WWE Wrestling franchise as WWE Smackdown begins airing tonight.

That being said, you can still find Michael Shanks on Friday nights this season … at least once in a while.  Shanks returns to reprise his role as “Carter Hall/Hawkman” on the CW Network series Smallville this evening.  It’s the first of at least two appearances this season for the actor.

GateWorld talked exclusively with Shanks when he was a guest at the Creation Entertainment Official Stargate Convention in Chicago in August.  Among other topics discussed was tonight’s episode — entitled “Shield.”

Both the Season Nine finale and last week’s premiere feature plotlines involving Lois Lane, who in the finale finally pieced together (for real and not as part of a fantasy or dream sequence) that Clark Kent is definitely not an ordinary guy from Kansas.  Events in last week’s season premiere, however, drive Lois to get out of Metropolis and accept a job for the Daily Planet’s bureau in Africa.  Enter Carter Hall, who helps Lois cope.

Shanks reprises his role as Carter Hall (a.k.a. Hawkman) in the October 1 episode of Smallville.

“It’s the second episode of the season,”  Shanks said.  “Carter Hall has an in-depth conversation with Lois about her place in Clark’s life.  And about how difficult it is to be a superhero-type in today’s world.  And how that superhero-type’s partner figures into that.”

Shanks last appearance on the series, in May’s Season Nine finale “Salvation”, was little more than a small cameo in a scene which included many others in the extended DC Comics universe.  That scene also featured Stargate Universe actress Alaina Huffman who briefly reprised her role as “Black Canary.”  Tonight’s episode promises to feature Shanks much more prominently.

And, as stated earlier, there’s at least one more appearance for the actor on Smallville still to come.

“They asked me to come back again, for episode eleven, I think,”  Shanks said. “I don’t know anymore because they haven’t started writing it yet.  But it will film in November, and should air as part of the mid-season cliffhanger.”

Thanks, Chad! Will there be more of this interview with Michael Shanks to come?

Awesome! Look forward watching when it airs in the UK.

Wow,there was a bit of Daniel in that performance! Was wicked!