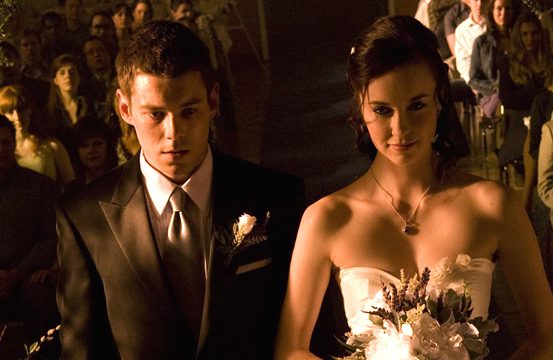 Tonight Syfy airs a brand new and very unusual-looking outing of Stargate Universe! Tune in at 9 p.m. (8 Central) for the Matthew Scott-centric “Cloverdale”.

Watch it live, then head over to GateWorld Forum to discuss the episode with us! We’ll also be updating the site all week long with the episode’s summary, plot analysis, transcript, Omnipedia updates, and more.

Here’s your preview of tonight’s new episode. (Watch out for spoilers!)

While surveying a new planet, Lt. Scott becomes infected by a plant-like creature. As he suffers hallucinations and falls in and out of consciousness, Tamara seeks a way to treat him.

Lt. Scott is infected by a plant-like creature. While Tamara tries to stop the infection spreading, Scott dreams of his ideal life back home on Earth.

Catch up with the latest episodes of the series now on iTunes or Amazon.com! (Unfortunately, Hulu is now only able to offer new episodes 30 days after Syfy’s broadcast.)

“Cloverdale” airs this Friday on SPACE in Canada and SCI FI in Australia, and 2 November on Sky1 in the U.K.

so in the preview from last week, it looked like Greer was taking on some sort of Alien with a flame thrower, soooo we are getting a Mathew/ Choloe wedding instead….right…. I am sure it will be still be cool but all the still images look kind of boring

how are ratings supposed to go up with wedding bells i almost dont want to watch the episode now since its going to be back on earth type junk.

Back to the forest planet in the Vancouver galaxy again I see. The more things change the more they stay the same.

Sounds like Black Mercy from the Supeerman comics to me.

You’ll get your damn action scene, you guys, calm down. This sounds like an episode SGA would do. And especially tune in if you don’t like the “shaky-cam” style of SGU, because the hallucination scenes are shot cinematically. I’m really looking forward to it, as always.

We’ve seen this before, SGA S3 ep 6, which was a weak episode.

I agree with Mentat. It’s almost like the series is filmed in vancouver or something /s

Sg1,sga and sgu all repeat episodes from other shows.

Not really interested in this episode. . Ratings are gonna be low again.

Am really get sick of all the SGU haters out there, I personally love the show, like I’ve loved everything Stargate since the original movie. If you don’t like it – don’t watch it! And stop complaining about it! Can’t wait, as usual, for my weekly stargate fix.

Finally an episode bad enough that I’m going to stop watching the show all together. I couldn’t even get through half of it before deleting it off of my dvr.

WABAM!!!! Loved the Car hit, then him screaming! Lol! Best PROMO YET!

Best Promo? What were you watching? Once again, this is a rehash of a SG1 episode from back in the day (seaon 4 or 5 I believe, when they thought they were firemen)… Awful episode and I’m sure this one will be none the better…

Really disappointed in this episode. John Scalzi needs to start calling them out when they try to pull the same sci-fi storyline crap over and over. The ending was so predictable and the only thing that I truly was surprised by, was the alien diving at them and getting vaporized by the kawoosh. That was badass. Other than that…meh. Broke their awesome build up. Before this, every single episode was even more amazing than the last. Then this.

Getting Worst!
At this rate I bet we won’t see a 3rd season.

Anyone notice the shameless plug of the MGM logo in the first ten minutes? :P

The only thing keeping me watching, If i’m honest is the shows got Stargate in the title and I’m hoping it will come to life.

If LT Scott would have a family this is it.
Eli brother of Chloe …of course because he love her so much …but he can give her only brother’s love only

Still, I prefer watching this than Sg1 and Atlantis.

Well, exciting End. Will Scott be the next?? The Trailer for Trail and Error is awesome by the way. I think then we become a few answers.

i saw the previews of it and it reminded me of the episode of sga when weir was back on earth. i thought tpt wanted something new and not recycled. jmo

I am at a loss for words. I knew the writers liked to rehash stories and even looked the other way when the episodes rehashed were good ones but this just sealed the deal for me. I was trying to be nice, trying to be unbiased but this just did it. From Scott being portrayed as a whiny unsure of kid about to get married to Chloe predictably having to go and do her own thing because she “wuv’s Scott” this show is just trying too hard to get its audience to like it. It’s like the girl in high… Read more »

Sorry guys, but I thought this episode was a vast improvement. BJS’ acting was top notch, and the lack of or at least toned down Rush deceit plot really gave the episode a boost. Add to that the continued unknowns surrounding Chloe’s (and now Matt’s) genetic manipulation and I look forward to future episodes.

I just hope for the love of God that they end the whole Rush vs Everyone thread sooner rather than later. I’m getting sick of Rush being “the baddy” on the ship. I want him to join the crew and them all to work together.

Ehh! Hard to follow. Lost interest early on. I think this is one of the worst shows this season.

What was hard to follow about it? It’s plainly obvious Matt is infected with an organism and is experiencing hallucinations from the very moment the episode begins.

I don’t care as long as it has Alaina, she’s awesome!

It’s actually more entertaining to watch the people trying to defend SGU at this point than watching SGU itself..and the way things are going, Gateworld may soon have higher ratings for that than SGU itself. What is becoming more and more apparent, though, is that the actors are actually pretty decent. I can point out instances of the characters being annoying, boring, whiny, etc. but I can’t really blame the actors for that. Which makes me realize that much more that it’s the writers and show runners that are hosing SGU. It could have actually been a good show. It… Read more »

It is a good Show. And it is not EMO.

It may not be emo yet, but it’s definitely been nudged in that direction.

I hate to say this because I would like to think I’m a discriminating TV viewer but… Damn, I want more space battle and explosions… I want the crew to gain full control of Destiny and put her through the paces… I want to see less dysfunction and more exploration and awesomeness… Not this milk toast!