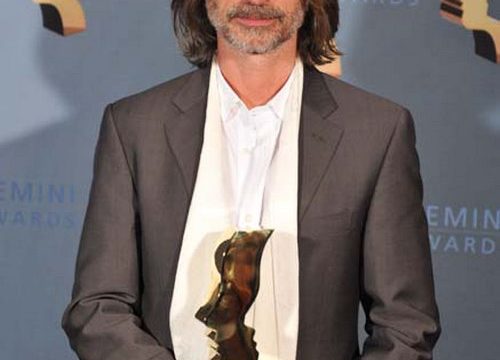 Stargate Universe‘s Robert Carlyle is the Best Actor in Canada, according to Gemini Award voters!  Carlyle won the award for Best Performance by an Actor in a Continuing Leading Dramatic Role, for his role as Dr. Nicholas Rush in the Season One episode “Human.”

SGU was also up for Best Dramatic Series.  The trophy went to The Tudors.

Congratulations to Robert and the entire cast and crew!

Here’s the video of him receiving the award:
http://www.youtube.com/watch?v=w1BP0YNdiIk
(Courtesy of Patrick Gilmore (Volker) who says “I’m the obnoxious one yelling “Woooo! Yaaaa!” over & over again.” :D

Certainly well deserved!!!! He does great work and I’m glad he’s been recognised for it!!!! Congratulations, Mr. Robert Carlyle!!!!

Nice to see that the rest of the cast is so happy for him. That really says a lot about him as an actor and a person.

Congrats Mr Carlyle….Come on people give SGU a go
“PLEASE WATCH IT LIVE SO IT STAY ON THE AIR”

I really LOVE the show.Sadly Im in Australia so watching it live dosen’t count-!

congrats, hopefully the show gets renewed and he can show us some more that great actting :D

Well deserved. Even if it gets canceled, I think most of us will admit (including Robert) that it was experience worth to have. Good series, excellent acting, and excellent use of Stargate cosmos material of so many years.

Also thanks to the rest of the acting team – you are the best.

@Bevarne: I am a big fan of the Stargate franchise, but only a moderate fan of SGU. My only reason to watch this show, is because of Robert Carlyle and his “Rush” character. The show itself, is centered too much on drama, and not enough on science fiction. Both the cast and crew, consider this a Drama Show, and not a Sci-Fi Show. Both SG-1 and SGA are Sci-Fi shows.

incredible actor. check out his take on hitler.

Is that Brad Wright’s ear on the left?

From Wikipedia: The Geminis celebrate the achievements of TV members of the Academy of Canadian Cinema and Television. Also from Wikipedia: Stargate Universe (often abbreviated as SGU) is an American – Canadian military science fiction television series and part of MGM’s Stargate franchise. Lastly (also from Wikipedia): Robert Carlyle, OBE (born 14 April 1961) is a Scottish film and television actor It’s sad day for Canadian Television (Trying to Celebrate Canadians as opposed to Foreign Artists), when Gemini’s couldn’t find a Canadian actor to give the Award to. It probably would have been okay if it was Louise Ferreira, as… Read more »

I’m sure the knives are out today in the Canadian Film Industry and Actor’s Guilds. It’s all a bit bizarre to me. Space has been promoting Louis Ferreira’s career/SGU involvement quite heavily since the show started and you’d think a Canadian citizen would take it over a “foreigner”. Would have like to have seen Maury Chakin (Neris – deceased) have gotten mention.

I think that’s because of hair:)

Both Carlyle and Ferreira have been excellent during Universe and both deserve a nod. They’re back and forth banter is easily the best part of the series.