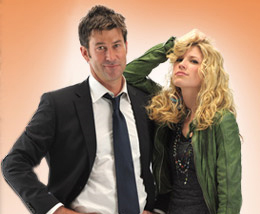 Stargate Atlantis fans — mark your calendar!  Joe Flanigan is returning to television in a new made-for-TV movie, set to air next month on FOX in the United States.

Flanigan (Atlantis‘s Colonel John Sheppard) co-stars with Brooke White (American Idol Season Seven) and Phylicia Rashad (The Cosby Show) in Change of Plans. Flanigan plays Jason Danville, a fighter pilot and husband of a woman who is named legal guardian of her friend’s four children — three of whom were adopted from third-world countries — after the woman dies in an accident. The two must learn to parent their new family and help the kids deal with culture clashes and life in America.

In addition to making her acting debut White performs songs in the film. The soundtrack is produced by American Idol‘s Randy Jackson.

Read more about Change of Plans at FamilyMovieNight.com and TVByTheNumbers, and check out an interview with Joe from the film’s set below.

(Thanks to Lily for the tip!)

Nice to see him in something new.

“Flanigan plays Jason Danville, a fighter pilot and husband of a woman who is named legal guardian of her friend’s four children — three of whom were adopted from third-world countries — after the woman dies in an accident. The two must learn to parent their new family and help the kids deal with culture clashes and life in America.”

It’s great to see Joe back on the telly even if this movie isn’t quite to my taste, its Joe “so yeah, don’t care because its Joe :-), its been sooooo long,” to long“.

Sadly I’m in the UK so cant watch it :-(. Just hope that we get it at some point or it’s available via other methods itunes etc…

So thats what John Sheppard has been up to. I will definitely watch this and i will make myself believe that its a sequel to Stargate Atlantis and maybe the four children are from another planet or something.

This looks interesting. I think I’ll be watching. ;)

He certainly gone down in the world.
Boring project an sound like a boring film.

LOL at knowles, he’ll get more mainstream exposure on Fox than he ever did on Syfy.

And he’s got 3 other movies either already filmed or planned, Alien Abyss (aka The Other Side)-a Syfy movie of the week, Good Day for It and Spore. He’s doing OK.

joe has a lot of charisma and loves his fans. he will do just fine in what ever he decides to do. if your not a joe fan that is fine because he has plenty of them to spare. btw joe is still looking as hot as he did when sga first aired.

@atlantisrocks i read some where it will be a world premire. so look for it just in case.

I DONT WANT TO SOUND LIKE THE NEGATIVE ONE but this just sounds like a rip off of sumerland hte show Jesse McCartney was on. though could be alright

It does sound like a boring film – I think “contrived” is the right description.

@mrs john sheppard Thanks for the info, I’ll keep a look out and fingers crossed. Hopefully I’ll be able to buy it too, as I’m in the process of trying to get any and all DVD movies that are available with Joe in. And for those that think its boring or contrived SO WHAT: Its Joe and loads and loads of us will wait and watch whatever, because IMO he can carry what ever the type of show, beside even though this isn’t my thing it could still be enjoyable. I don’t like Horror or Zombies and still gave The… Read more »

Joe is good, but a television movie is like an actor’s Hell. Most actors do it when they are trying to scrape together cash for a career that is basically dead.

I was hoping that Joe would land some big time TV or movie roles after Atlantis had ended. That doesn’t seem to be the case.

Oh wow, first Jason and his Conan film, now Joe and this. I guess their agents really have alot of faith in them to get them such amazing projects as this…. LOL seriously, this is something you’d find in the bargain bucket at HMV for £1.99, I don’t know how much that equates to in $’s, but I’m guessing it aint alot.

it does sound bad but at least its not a sci fi channel movie. he might make some money doing this. and it could be a pilot movie for a tv show

Very happy to see a project from Joe. I like family movies and he’s such a family guy I know he appreciates putting something out there that anyone can watch. Looking forward to his others projects coming out next year: A Good Day For It (modern day western type/thriller), Alien Abyss (aka The Other Side) for Syfy, and Spore (comedy/science fiction). I know he deliberately took some I also appreciate all the conventions he’s been to the last couple of years to be in touch with his fans.

Meant to say in the last sentence of previous post: I know he deliberately took some time off to rest and be with his family and I also appreciate all the conventions he’s been to the last couple of years to be in touch with his fans

I seem to remember some PTB telling all the SGA fans that if we didn’t want to watch SGU then don’t. I think the same goes here. If you think its going to be so awful then skip it, change the channel. Do some needlepoint ‘fer crying out loud! But I will watch the movie because I’m going to show my support for Joe.

Yay! Excited to see Joe then!

of course joe is awesome! remember, he did pull in ratings and made history for the syfy network when he appeared on warehouse 13. i cant wait to see my tv husband on tv again, did i just say tv husband?! :)

Not a movie I’m likely to watch (honestly, the plot summary sounds like something out of Lifetime, I’m hoping it is just a poorly written summary).

But I am always happy to see actors I like getting work. With rom-coms like this, it is all about the chemistry of the leads, I think, and I bet Flanigan does a great job.

This does sound a little bit cheesy and I must admit the idea of the girl from American Idol gives me some reservations but, as a Joe fan I really hope this works out for him and hopefully will provide him with some good and positive exposure. Who knows, maybe this will turn out to be something along the lines of ‘party of five’ or something, that didn’t turn out too bad for the likes of Neve Campbell and that Matthew Fox from Lost! Regardless, I hope that this will help towards Joe getting the chance at some more primetime,… Read more »

I’ve been looking at the website with the trailers, photos, behind-the-scenes interviews & stuff and such, and I can see where some folks might not like it. However, there are so few shows out that you KNOW you can watch with your kids that I’m really looking forward to it. I love “feel-good” movies (one thing I particularly like about SGA is how they deal with serious themes with a light touch) and I like happy endings, so this will be fine. And it’s possible it could be a tv series, too. (Psst, in the Joe interview, he mentions he… Read more »

Sounds like a TV pilot for a new series. I’ll look. Of course former Stargate actors have to make a living but I’ll tell ya, if any get hired onto a regular series, you can kiss goodbye any availability for a movie, unless it can be shot in 3 weeks of their break.

To drideboer: I believe this is a stand-alone movie sponsored by Wal-Mart and P&G. It will be lame but I’ll always watch anything Joe is in to support him. He does have a couple of other movies either already filmed or filming and we can hope they’ll be better than this one. Plus, maybe Joe wanted to be in something his kids could watch without being traumatized by Wraith!

I am happy to see on the screen again. I would watch anything this man is on it. Joe is so hot, I don´t understand why isn´t he working in a great movie. He could do so much more. Man, get Keanu Reeves agent! People look at his face…We love you Joe.