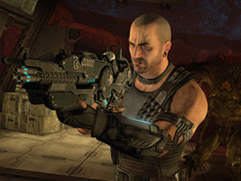 Stargate Universe actor Brian J. Smith will play the lead role in a new Syfy Channel original movie, Show Patrol reports and Syfy has confirmed in a press release today.  Smith has been cast as Jake Mason in Red Faction: Origins, which begins production this week in Bulgaria.

The movie is based on the THQ video game franchise Red Faction, which first debuted in 2001.  The story is set in the 22nd century, where Smith’s character fights to save the Martian colonies from a threat that wants to take control of the planet.  Here’s how the network describes the story:

Twenty five years have passed since Alec Mason led the Martian Colonies to freedom … and ten years since vengeful enemies killed his wife, kidnapped his daughter Lyra, and left a broken hero in their wake.

Jake Mason, Alec’s last surviving son and a ranger in the Red Faction Militia, had never abandoned hope that somewhere in the raw outlands of Mars, his sister was still alive. Now, just as a powerful new enemy swarms across the planet, he’s found her, only to learn that his long lost sister is one of them … a cold blooded soldier sworn to destroy the Red Faction and conquer the planet in the name of a madman.

Jake must now battle the relentless regime and somehow reunite a family torn apart by war.

The movie is set between the events of the Red Faction Guerilla video game and the upcoming Red Faction Armageddon, the latter of which is set for a March release on the PS3, Xbox 360, and Windows PC.

Red Faction: Origins is directed by Michael Nankin (Battlestar Galactica, Caprica), and scripted by Andrew Kreisber (Warehouse 13, Fringe).  Syfy will air the movie this May, alongside the release of Armageddon.

Oh interesting! could be good!

Wow, videogame movie made by SyFy. What could possibly go wrong?

Well its made by SyFy to start!

I was kinda sarcastic.

Well, that’s another SG actor cast in one of the Syfy movies, (David Hewlett and Joe Flanigan have Syfy movies coming out this year), at least they support the actors, even if the shows themselves get canceled.

Brian J. Smith can do a lot better than a movie based on a game that has a small following.

The only way this new could possibly be any worse, is if Uwe Boll was directing it!

so we don’t boycott syfy?

as if a red faction movie needs actors. the only thing red faction is remembered for is being the one of the first games to to destructible environment

@Billz: Then it would be below the line that any movie can possibly be.

@Agent_Dark Red Faction went from being about a conspiracy and genetics to players fighting aliens(native to Mars). The series just keeps falling deeper into the the abyss that is failure.

Ok,SyFy falls into the category of a mexican soap operas channels,that’s for sure now!
GOO SyFy!!

I loved the original title in the series, and the latest installment (Guerrilla) was one of 2009’s best games. Problem is, storytelling isn’t really the strong point of this IP.

I find it insulting.
Syfy ruining one of my favorite games by turning it into a horrible horrible HORRIBLE S2TV movie?

I’ve seen Syfy S2TV movies and they are damn aweful. Too bad a great actor like him was cast in such abomonation, hack, this shouldn’t be even allowed to be called a film…

GOOD JOB SYFY FOR RUINING NOT ONLY A GREAT VIDEO GAME BUT MY SHOW SCHEDULE AS WELL!