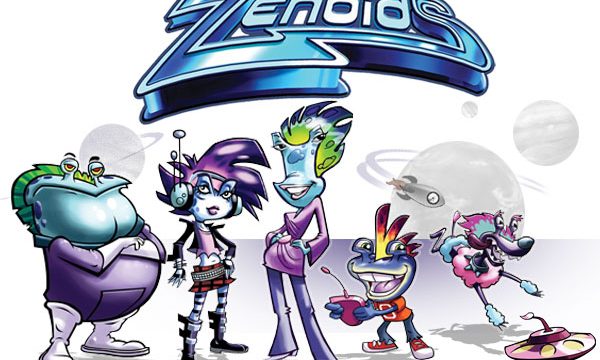 We showed you that on-stage interview that Star Trek‘s William Shatner did with Stargate‘s Amanda Tapping at Comic-Con, helping to kick off the new Shatner-backed sci-fi social networking venture MyOuterspace.com.  The two joked that they should do a show together.

Tapping will join Shatner to voice husband and wife characters in The Zenoids, a Web series for MyOuterspace.  Four webisodes will start production in late February, according to The Hollywood Reporter.  The show “portrays a family of space-faring Amphibinoid musicians who travel the galaxy performing their musical act, with Shatner and Tapping as a husband-and-wife team trying to keep their superstar dreams alive.”

In addition to voicing parents “Kozmo” and “Zara,” Shatner and Tapping will also executive produce the series, according to The Vancouver Sun.

Here’s how the official Web site describes the show:

Kozmo and Zara were once a popular singing duo on their home planet Zeno. Now their family lives on a spaceship as old as their last single, bopping around the galaxy, trying to keep the dream alive. Daughter Ziri and son Iggy have grown up in the band, reluctantly helping their parents sing for their supper – and engine parts.

Good gigs are hard to get, but Zara keeps the schedule full, even if it’s only bowling alleys and carnival shows on amusement asteroids. Kozmo’s always got a new pie-in-the sky idea, invention or big-time deal that would set them for life yet never pans out. Between Kozmo’s hustle and Zara’s bustle, they always scrape by, as the Zenoid family lives from adventure to adventure.

Fans will be able to submit scripts online, with one winning script to be produced as an online short.

Learn more about the series at MyOuterspace.com.

Any idea when the first episode will be available?

Sadly for a *Web* series, using Flash is quite non-web :-(((
This aside it’s great news, I’m sure they will do great work together :)

That. Is. AWESOME. :) Can’t wait to see what Amanda and Billy have in mind!

@halfblind79
It’s a contest. Whoever submits the funniest script gets it made. Sounds like they’re in a rush to get it produced quickly so I don’t think it will be very long.

Damn. I was hoping that Amanda Tapping would head the other way on the media scale (mainstream TV, to mainstream movies) and not end up doing a second rate web cartoon.

A lot of “high end” actors and actresses have “low end” productions under their belt.

I think some of you are missing the point MyOuterSpace. It’s a chance for talented aspring writers, artists, etc to learn the trade by working with professionals. In this case anyone can submit a script for this toon and have it produced. It’s anyone’s chance to work with the Shat and the Queen of SciFi. Wouldn’t that be an accomplishment to put on your resume?

I think this sounds really cool!

‘Tripping the Rift’ should be brought back.. that was hilarious..