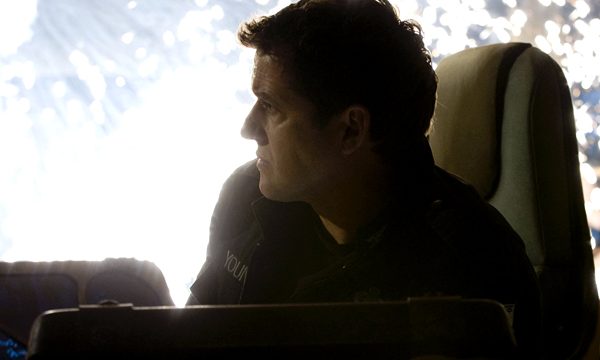 Following on the heels of Syfy Channel’s announcement that it will begin airing the final 10 episodes of Stargate Universe on March 7 in the U.S., Canada’s SPACE announced today that it will also bring the series back the same week.

While the show has struggled on Tuesdays in the U.S., it has remained SPACE’s strongest performer.

The network also offered up a brief description of the plot for “Deliverance,” the eleventh episode of Season Two — which does include a spoiler.  Turn back now if you’d rather not see it …

The final 10 episodes pick up from December’s jarring cliffhanger, where the Destiny encountered two warring races and an ally thought dead returned. In the Season 2.5 premiere, “Deliverance,” the Destiny is now locked in a battle with a Drone Command Ship and surprised by the arrival of the aliens that abducted Rush and Chloe.

Get the full scoop on the rest of SGU‘s final season in GateWorld’s episode guide!  And keep your browser locked right here for that impending announcement about how the producers hope to wrap up the story, and what’s next for the Stargate franchise.

Man, I read that way too fast and thought Space had picked up SGU for an additional 10 episode season.

im pretty sure riley’s back

I do hope Space would consider picking up SGU. I know that it is a long shot but given that is has done well for them, they could use SGU to market some original programming for their network instead of relying on Siffee’s cast offs.

You really expect SGU to get more rating at such a odd time at 10 PM? Give me a break!

They were referring to the return of Telford in the mid-season finale, not the upcoming episode.

all they dead people will be back, thats how LOST ended.

I really hope that JM convinces MGM to get at least 10 episode season to end the story. I bet Space would enter since they do get benefits, the sets are still up lets not waste time and give SGU a proper ending.

As for us fans in the US lets watch those last 10 episodes live so we can help out with the effort to bring SGU back with good ratings lets be positive.

It’s not up to JM. JM’s sites have been set elsewhere. It’s Brad Wright that is in charge of trying to keep SGU alive.

Got it thanks for the update…so fand out there watch live is the only way to comvince the execs that tha show has potential and can give Brad Wright more arguments to keep the show alive.

@scifi75 Space tried to. They looked over the numbers in length but came to the conclusion that they simply couldn’t afford it.

Most people will tune out the last 10 episodes, because most think the show was canceled and that was it. Others won’t want to watch a show with no future.

@Horcrux
The series coming back for a 10 episode run isn’t going to happen. According to JM if all goes well then there will be something for all 3 Stargate incarnations. My guess is it will be more along the lines of some movies either direct to DVD or to cable.

Meh. Space still isn’t airing in HD. Which means I have to get my SGU elsewhere. Its sad really, because when MovieCentral aired Atlantis in Canada it was in HD years ago.

I’m said this is going but I have to say never got into it the way I did the other 2. It doesnt have the characters that SG1 and SGA. That being said I still like it and said to see it go. I hope MGM makes another go at another Stargate Franchise or at least makes the darn SG1 and SGA movies.