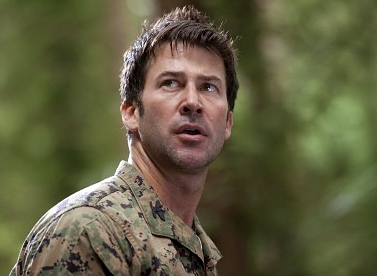 Flanigan stars as Colonel Sam Synn, alongside John Rhys-Davies (The Lord of the Rings, Sliders) as Senator Jackson Crenshaw, and Dagmar Döring as Doctor Jillian O’Hara.

Here’s how the studio describes the film’s story:

It was a groundbreaking device designed to glimpse alternate universes and government commissioned by a brilliant physicist. But the machine malfunctioned on its first presentation, transporting a group of observers into a nightmarish new dimension. The team quickly must use ingenuity and courage to outwit, outplay and outlast the native man-eating creatures of this bizarre new world while doing their best to repair the damaged machine. Even if they stay alive, without a working transport, they may never make it back home.

The production studio has already released a full-length (01:43) trailer for the film:

Learn more about the movie and check out photos at RHI Entertainment’s Web site!

That is so funny!

I CANNOT wait!! This is the best Stargate related(even peripherally) news I’ve heard in years!
And that “Don’t poke the alien” line is classic. :P

Wow great stuff, in true spirit of Stargate adventures. Aliens looks even more dangerous then Goa’uld system Lords! Something to look forward too.

Looks bad, just like all the other Syfy movies.

Hah, looks like Sliders They even have John Rhys-Davies there! *g*

It’s funny, because you’re not.

Sheppard’s got this — he’s done the whole ‘help I’m stuck in another dimension’ thing before.

Oh wait. He was with McKay then.

i will give it a chance just because it is Shepard

Guys, I watched FOX’s “Change of Plans” because Joe Flanigan was in it, so, (hmmm, should I have said that?) I think I’ll be watching this. I will try to watch it without tuning in to SciFy.

Doesn’t look all that bad, especially for a syfy movie.
How ironic that John Rhys Davies is in there. Traveling through paralel universes once again for old time’s sake eh?

Joe flanigans presence in it seems to miraculously increase it’s quality :) Almost as though there’s a famous actor in it ( aside from John Rhys-Davies short part ), because we know Joe so well.

I’ll wait for it to come out on DVD or iTunes or Amazon. I ain’t supporting Syfy no more!

@Anthony, well I for one am going to reward Syfy for giving me something I want to see, namely Joe Flanigan, and will be watching it live. Now if only I had one of those Neilsen boxes…

I saw the trailer as soon as it was released. Had been waiting for months for the air date. I will certainly watch this live and record it since SyFy needs to be rewarded for having Joe Flanigan star in a movie, even just a SyFy movie. I think this is going to be more than a few steps above the original movies shown on SyFy. I don’t know if it’s Joe’s presence, the writers, director or producer or what but it looks like quite a good little popcorn movie. Plus, Joe Flanigan in uniform with a gun? What’s not… Read more »

Well, it’s a god thing that our hero has experience of both alternate universes and hostile alien creatures.

I will see this on SyFy as I see all of them. Most of them are crap, but I like Rhys-Davies and Flanigan so It might, MIGHT, be ok… maybe.

Can’t be as bad as most SyFy movies.

Any bets on whether this movie gets better ratings than recent episodes of SGU?

normally these syfy movies are horrible but this one looks like it might be okay. I’ll give it a chance!

Oh my God, I am so waiting for this. I belive it will be a great adventure. I hope it becomes a series and we can see Joe killing some aliens every week. Man, I hope this works out. I will watch and tell everyone I know to watch too.

This looks alrite, it is definatley a lot better with Joe in it. I showed my mum the headline and she’s like ‘Oh we have to watch this1’. She loves him lol. Does it show here in England?
The story seems good, better than a lot of movies i’ve seen, one to watch I say… ;D

For Imitation Tofu:
If there’s any way to do it, I’d love to see the ratings comparison.

@Imitation Tofu and rsharpe, the Saturday movie ratings have been hovering around 2 million for months now. Syfy usually puts out a press release the next week with the ratings and demos. I don’t think TravisYanan, who usually posts cable ratings, gets the Saturday cable numbers so we are dependent on the networks.

I am pissed,, in the trailer, they killed off Professor Arturo.. maybe we got lucky and it was his double…. you know from that world where his double kidnapped him…

yey!!! i cant wait to see my tv husband on tv again!. anything with joe is worth my time.

Sheppard kicking some alien ass….hell yeah! Probably could have fix this accident if McKay was there.

For Sylvia: Thanks for that information. I was just remembering that the episode of Warehouse 13 with Joe as the guest star brought the ratings up higher than any ep of that show, before or since.

im hoping itll b good. even if it isnt imma watch it.

@rsharpe, WH13 has gotten higher ratings since that ep, but yeah, at the time it was a record! I only watched to see JF, since then I havent been keeping up with the series.

I hear you all on the bad syfy movies. If they didnt waste so much on these bad movies maybe we could get a good show for us Stargate fans. That being said its Joe Flanigan so you bet I’ll watch. I’ve sat through many a bad syfy movie just to see my Stargate actors. Its a sickness. Although he definitely needs McKay and Ronon for this job. Looks like he needs more backup.

@Sylvia, I didn’t know that the show had gotten higher ratings. I remember this so well because I was at last year’s Stargate Con in Vancouver and when Joe and David were both on stage, David was giving Joe hell because he’d bragged a little (okay, a LOT) about the record. I thought the bragging was cute and David was hilarious as he tried to outdo Joe.

Look good as a movie but it would be greatest for a tv series :)

I’m only watching this for Joe Flanigan. Unfortunately Syfy movies are always bad; plus I haven’t watched anything on the channel since they unreasonably cancelled and replaced Stargate Atlantis. He just keeps getting hotter oh yesss! I can’t wait till the Stargate Atlantis movie arrives (wake me up in ten years).