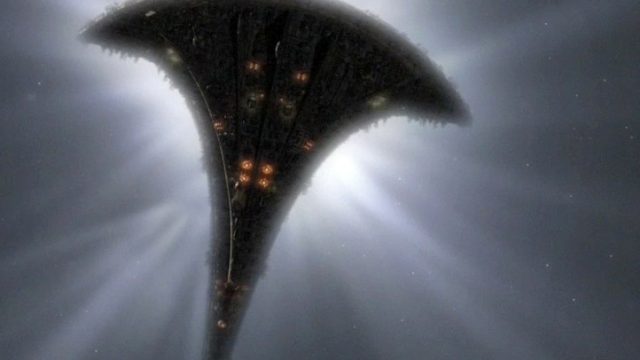 Whether you blame the show or blame the scheduling (or a little of both), there’s one reason why Syfy Channel decided to drop Stargate Universe: the show couldn’t pull in enough viewers in its new Tuesday night time slot.  How well do you think it will do tonight?

While an eleventh-hour renewal is all but impossible, the show will at least have the benefit of trying out another timeslot when it returns tonight to launch its final 10 episodes.  “Deliverance” airs at 10 p.m. Eastern and Pacific.

It will be the first time that a Stargate series had aired on Mondays.  The Tuesday experiment proved a colossal failure for Syfy, which ended up cancelling both of its Tuesday night lab rats — SGU and Caprica.  Stargate had the deck stacked against it: no lead-in show (and, in November, no lead-out either), and programmed against the network juggernauts Dancing With the Stars and NCIS: Los Angeles.  Both of those series averaged around 16 million viewers (Live + Same Day) every week.  NBC’s The Biggest Loser and FOX’s sitcom due were no slouches, either.

But even when the competition took the night off — for election night news coverage, for example — SGU wasn’t able to capitalize much and gain viewers.

Castle was watched live by an average of 10.15 million viewers last week, while Hawaii Five-0 drew about 7.23 million for a repeat.  9.15 million tuned in for Harry’s Law.

Compared with two shows north of 16 million, the competition may be a little easier on struggling cable shows.  Sci-fi genre fans will no doubt be attracted to Castle‘s Nathan Fillion and Five-O‘s Daniel Dae Kim (Lost) and Grace Park (Battlestar Galactica), though.

So, what’s your ratings prediction for tonight’s premiere of Stargate Universe? The first half of the season averaged 1.078 million viewers, leaving off with 1.094 million for “Resurgence” (story).  The show has a lead-in now with Being Human (1.41 million viewers last week) … but is it enough to overcome viewers’ animosity at the network and lessened inclination to watch a cancelled show?

I Will buy the DVDs. The show is fantastic!

My big concern is that not everyone knows about the day/time change, let alone the the show is returning to finish the season.

Not that competition matters anymore. But let’s face it. For all it’s good points if the creators had not made a grand experiment out of Stargate, we still might have a show. But they mis-read the people and the demographics, and tried to appeal to a younger group whilst alienating the longstanding fans of the franchise. I really never cared about the show that much even though I have seen almost all the eps so far, but it is sad to see it go none-the-less. I hope SyFy has learned a little about television ratings by now. Stop churning out… Read more »

I hope tonights show has nothing to do with a river trip that meets up with some hillbilly people.

Wouldn’t it be funny if Universe does collosal numbers on Monday especially during this time because no offense but my DVR shuts off at 9pm on Mondays. This is actually a kick ass time. If it does really well I wonder would SyFy put money back into it? I doubt it because they have new shows in the pipeline waiting for that precious time but if it does stellar numbers two movies have to be greenlit based on that right?

@saxgod
“If it does really well I wonder would SyFy put money back into it?”
Please don’t get my hopes up. :|

I would think you’d only get a subset of the people who were still following the series at this point. I think the Live + 7 was about 1.5 million at the end of Season 2.0?? I honestly don’t see how they are going to get new viewers hooked into it now. Being Human as moderate numbers as a lead in, but nothing spectacular.

I think with two major networks in reruns we could get 1.22 million. Would be nice to see a bump up from the midseason finale.

I’m an avid follower of Castle and Hawaii Five-0, so I’m happy that tonight both are repeats. Also both shows are winding down their seasons. I hope SGU makes a big enough impact for a DVD-Movie or Mini to be made ala Farscape.

I’m a fan of both Castle and SGU, so I was a little torn when I learned that SGU would be in the same time slot as Castle. However I will be watching SGU during the air time, mainly because Castle is available next day on Hulu while SGU has that 8 day delay.

This show is done they should play every episode in a one day marathon, syfy made a big mistake and making us wait weeks to see the end is Bull*hit

One thing that struck me was how SGU has epic vistas and visuals (such as Destiny following the Seed ship into the sun in “Resurgence”), but feels like it misses some of the epic-ness of SG-1/SGA saving Earth from the Goa’uld or Replicators: the focus is on 1 ship and the politics of her crew. For the most part, I’ve really liked the show and the gritty, realistic style the producers are using. A lot of the humor and lightness of SG1/SGA are absent, but the alien encounters and Lucian Alliance have more weight and come across as more threatening.… Read more »

The long layoff , channel switch and new timeslot is going to cut the “newer sg” viewers. The die yards will be there but the show wasn’t advertised enough. I’m predicting all-time low numbers. 800k overall.

The new Stargate experience that sgu brought was a much welcomed and much loved experience for me. I grew tired of the cookie cutter sg1 sga. A more realistic stargate with real consequences was awesome.

The only thing that can save SGU now is a massive uptick in ratings.

So here’s to that I guess…

I honestly think that ratings don’t matter in SGU’s case. Even if it had had ratings that rivaled the best of Atlantis or SG-1 or Battlestar it still would have been canceled. Why? 1) Its an expensive effects heavy show 2) Look SyFy’s lineup. Universe and Caprica were by far the most serious shows on SyFy. Everything else is popcorn or tongue-in-cheek type stuff like Eureka, Warehouse 13 or Sanctuary, or reality shows like Ghost Hunters. Even the upcoming Blood and Chrome is going to be more episodic than serialized, the days of SyFy catering to the more serious drama-oriented… Read more »

We are now entering into what I like to call the new dark age of TV. Nothing genuinely entertaining, awe inspiring of thought provoking.
Just non-scripted drivel and doctors, lawyers, and cheap fantasy junk, and more doctors and even more lawyers and yes even more and more cheap fantasy junk. I really have no reason to justify paying for my cable service any more.

Need my Sci-Fi space fix. Getting dizzy…unable to stand…unable to breath…

I probably mentioned the dark age stuff in a recent post. If so then I apologize…not for the comment but for the rerun.

I watched it, does it count? With all the talk and complaining about the cancellation, it could influence more people to watch the show. I am expecting a slight rise in ratings, maybe back to around 1.5 million.

SGU is done…
Stargate is done…
I now return you to your previous scheduled place for hard science fiction……………..BOOKS!

@Deangrr
I think your right, i think SGU will be a sleeper. Ive seen the trailers so many times on syfy i think even non sg fans are gonna tune in

Had Atlantis continued, it would have ended this year most likely, we were VERY lucky to get more than 7-8 seasons of SG-1 and I consider Atlantis and SGU, seasons 9-10 of SG-1 and the two movies to be blessings. I hope and pray for any sort of conclusion to SGU but I think either way this year would have been it for Stargate on TV as we know it. That being said, I hope Fringe and Chuck get renewed because if not the pilot season for SF/Fantasy sounds extremely boring. I’ve also enjoyed No Ordinary Family but now there’s… Read more »

Deliverance was an excellent great episode. SGU is one of those series that just took a little time to get its ‘wheels’ so to speak. Too bad that SYFY couldn’t just have stayed with it a bit longer. It’s the best thing on TV as far as I’m concerned. Cancelling it was a real mistake in my opinion.

Doctor who is the best show on TV right now.
If stargate ever comes back and it is not Stargate universe I hope BBC america picks up a new Stargate series.

I like all of the 3 doctors that have been on since 2005 everytime it happens it rooboots the show and makes it fresh with out losing what made it good before.

unlike stargate universe doctor who does it right.

Deliverance… well i hope it delivers!!!

@Browncoat 1984 The Walking Dead is an amazing show,really is.Can’t wait for the next season.
Fringe is probably the best thing on tv nowdays and I like V 2009 more and more.
Otherwise yeah,same old,same old;cops,lawyers,CSI/CSU pandemic..seems like every town now has to get it’s own CSI show,doctors and reality tv.
Anything extraordinery,out of the given parameters..anything different,original,new and creative seems to immediately gets cut down.

What do you all think about the upcoming Terranova and Falling Skies?

Deliverance ROCKED…and yes, the “wrestling channle”, I mean SyFy…will find they only have an audience on Friday..and no revenue the rest of the weak…hahahahah so bad for them

nice to see the series progressing and getting its legs even moreso than it was the last half season. Shame SyFy lost anything resembling a brain when they changed their name… last time I checked, a sci-fi channel showed sci-fi? Or am I being an old traditionalist?

SyFy has been making fraking mistakes when they moved it to Tuesday Night as well as Monday Night. They should have kept iy on Friday Night as well as in the summer too. Just like who SyFy no longer show new episides of Doctor Who or Sarah Jane Smith. They sound show clips or preview of the next episode on other networks as well.

@gatefan2486 Craig Engler (@Syfy on Twitter) said they lost over 1million fans on Friday night. So it was not really sucessful there either, the move to Tuesdays was just a desperation move to see if ANYTHING could help the ratings. They moved it again to Mondays in hopes that Being Human’s audience would carry over to SGU.

This i thought was the best sci fi yet .I would belive if they gave it a chance it would be a all time best