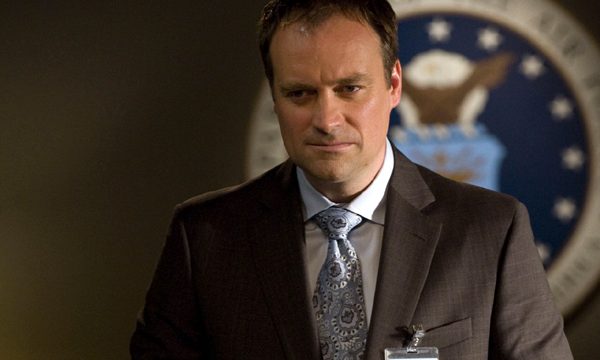 Destiny‘s Lifeline. The stranded crew are desperate for aid from Earth, and Dr. Rodney McKay thinks he has a way to dial the ninth chevron — with a little help from one of our allies in the Milky Way Galaxy. But it’s not just a milk and cookie run that the crew needs: the Lucian Alliance is also poised to move on the planet Langara, and perhaps try to retake Destiny.

A possible lifeline, or the threat of invasion? The stakes have never been higher.

Watch the videos below and tell us you don’t think this looks like the most epic hour of Stargate Universe yet. After you’ve seen tonight’s episode, point your browser to GateWorld Forum to talk about it with other fans! And be sure to come back to GateWorld throughout the week for our transcript, podcast discussion, HD screencaps, Omnipedia updates, and more.

Here is your preview of “Seizure” (beware of spoilers):

Homeworld Command tries to convince an ally they suspect might be infiltrated by the Lucian Alliance to let them use their planet to dial Destiny. Meanwhile, Rush (Robert Carlyle) is trapped in a simulation created by Amanda Perry (Kathleen Munroe).

Rush slips into a coma in the neural interface chair, and Amanda connects with him in the ship’s matrix, but Ginn informs Eli of a problem with that scenario. Elsewhere, Dr. Rodney McKay’s plan to dial the ninth chevron address hits a snag.

In Canada: “Seizure” airs this Tuesday at 10/9c on SPACE. Also don’t forget to stay tuned for INNERSPACE at 11 p.m. The behind-the-scenes show is sending off SGU with weekly tributes.

Read more about “Seizure” in GateWorld’s Season Two episode guide, and stay tuned for our full coverage of the episode all week long!

Umm… Is it just my PC or does this article have a date of March 30th? Did I miss the episode already?!

Maybe someone’s Network cable got caught in a Solar flare :)

Wonder how Rodney and Jennifer are doing? Oh. Maybe Twitter knows: @dhewlett Dinner last night with @JewelStaite, @handsomanderson and half a cow of fine steaks is making this Mac and cheese seem like a light snack!

Any SGU with SG1 or Atlantis actors will make the show more appealing and raise the ratings for that week. Maybe if the writers wrote these characters in as semi regulars or background stories, the show might have stood the test. Then everyone would have gotten what they wanted. 3 Shows in one with the emphasis on SGU. But no. The ptb ‘new’ better how to appeal to a demographic they were sure could be convinced to watch and bear fruit for a new following. And what are the ptb’s doing now? trying to get a new career going without… Read more »

LOL @ kenny, all the sex?? seriously where do you people get this from, there’s been a handful of sex scenes if you can even call them that, but yet it’s always labeled as a sex driven show. Also how is having homosexuals on a show a bad thing exactly?? You make it sound like that was a cause for its demise. Im already dreading this episode for McKay alone, he was unbearable in HIS own show, but hey, each to their own, I guess as the fans regularally put it, they can ‘relate’ to someone that is so ego… Read more »

If Rush is in a coma, does that mean he won’t be interacting with McKay at all in this ep?

Read this interview with Hewlett. He said it best. The show should have been named Universe. because it was a totally different show:
http://www.tvsquad.com/2011/04/04/david-hewlett-interview-stargate-universe/

Excerpt for Hewlett’s interview: http://aol.it/gRkKPQ
I think the biggest detriment they had was that people came from watching ‘Atlantis’ expecting more of the same from ‘SGU,’ and it was a really different change of direction. And it’s beautifully done … I think the problem they came up against was that they had a very strong existing fan base for something that was, I think, lighter. You know, I used to call us the “Disney of science fiction.” I didn’t mean that as a put-down

Seriously? Wray’s sexuality is such a minor point that I wouldn’t even consider it as a ratings factor. It’s fairly representative of reality there: there are LGBT people among you and it really doesn’t change jack.

I wouldn’t call it a put down either, that’s exactly what Atlantis was, a Disney show set within the stargate universe.

Oh god it’s about time I have been waiting to see hewleet and picardo for weeks.

SGU is definately a more serious show, i love the show but i see what your saying about alienating a large portion of the SG fanbase by switching it up. I like the direction they went with the show but i do miss the comedy aspect of SG. If they scooped a couple of characters that were on the other two shows it definately would have been a success. I dont agree with xandder tho i think mckay was one of the best actors on stargate. If they ever get around to making another SG movie i hope he will… Read more »

Great episode i enjoyed it very much.
Toobad the show has been cancelled and they are doing it the “right” way now :(

@xandder: For me, it wasn’t about relating to McKay’s character – I utterly loved his scathing remarks. He was the one character on the show who didn’t walk on egg shells and called idiots on their BS openly. But he never lowered himself to simple name calling. His quotes like “Your masterful grip on the blatantly obvious continues to impress me” or “It’s a city, not a yo-yo” are classics. I don’t really relate to Sheldon on The Big Bang Theory either yet I love the character.

Defo a step down from the previous episodes, still a good one though. The whole langara segments felt drawn out, while the stuff happening on the ship felt way too rushed. Not at all balanced, which is disappointing. Glad to see that McKay was actually tolerable though, who knew all it needed was for him to be in a serious setting for him to act like a grown as opposed to acting like a child constantly…

[…] the snooze at least twice before scrambling through my morning routine.  I started watching ‘Seizure‘ just shy of 5:30 a.m., giving me at least five minutes slack time after finishing the […]

well i have never watched sgu nor i intend too. last night i just turned my tv on and tuned it in to give it ratings just because hewlett and picardo were on. after that i turned it off.

I love McKay character,he’s one of my favorites,but this ep definitely fell short,I think.Compared to previous few especially.It was cool to see call backs to earlier two series and it’s always great to see Picardo/Woolsey.But this whole Langara aspect of the episode was basically nothing but a red harring.Since by the time this episode was filmed,they must have known,due to ratings that there was at least a strong possibility of them not getting another season,they could have made this Langara mission succed,instead of fail this way.That way,even if there was an open ending to a show,it’d be much more appropriate… Read more »

Nice ep, I just watched it.Pitty there is no season 3, It did leave the door open for mckay too join destiny though.