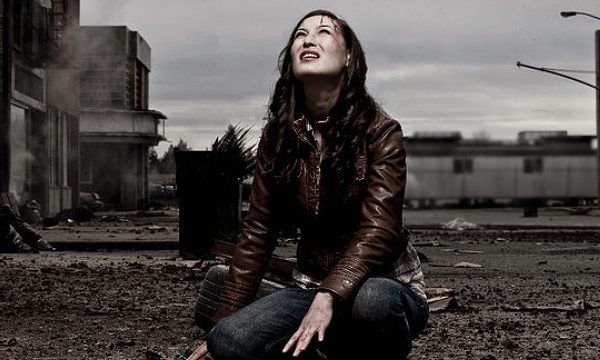 There is life after Stargate — not only for the franchise’s talented actors, but also for the talented behind-the-scenes crew.  SGU and Atlantis visual effects supervisor Mark Savela is currently working on pitching a new science fiction series, along with help from his former Stargate comrades.

Echoes filmed (on the set of Watchmen, still standing in Vancouver) in March and April as a 12-minute pitch, making up four scenes and about 15 pages of the pilot script.  Based on a concept from Savela and Ken Kabatoff (a production assistant on SGU), the show would tell the story of humans trying to survive after an alien apocalypse on Earth.

That concept has been done plenty, but the creators insist they have an interesting take on it.  “We’ve always seen these aliens-attacking-the-planet [stories], and it’s always the aliens attacking the humans,” Kabatoff told Show Patrol. “Having aliens against another alien race basically leaves the humans as collateral on their own planet. Many of the Earth’s citizens have been wiped out already. It’s not us against them, it’s them against each other, and we’re just trying to stay alive.”

“It’s kind of like two superpowers fighting in Australia, and destroying the Australians,” Savela added.

Starring in the pitch video for Echoes is Jennifer Spence (SGU‘s “Lisa Park”), who plays Sonya, who leads a group of survivors two years after an alien conflict has ravaged our planet.  The survivors are attempting to discover why Earth was decimated by the alien war.  “It’s basically her journey from a shy, unassuming kind of wall flower into a kind of Sarah Connor-type character,” Savela said. 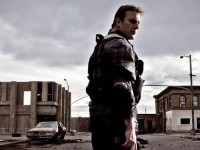 Long-time Stargate director Will Waring is also on board the project, along with director of photography Michael Blundell, production designer James Robbins, and stunt coordinator James Bamford.  Joel Goldsmith is also scoring the presentation video.

“Everybody just loved working together [on SGU] so much and nobody wanted it to end,” Savela told Show Patrol. “When we came up with this project, people said ‘Oh, we all get to work together again? That’s really cool.’ Everybody jumped on board.”

“We really wanted to show the versatility and range of the show so we picked four very different scenes in terms of tone,” Savela told GateWorld. “We sent out the the teaser and Act 1 of the pilot to the cast and crew we wanted involved and were just overwhelmed by the response to the script. A lot of people got on board right away based on the strength of initial tease and first act.”

The creators plan to add score and visual effects to what they are shooting now, and then shop the show to various networks.  It will also be released in some form to viewers online, starting with a teaser trailer around mid-summer.

“We are planning on finishing the four scenes completely (VFX, CC, sound mix, score), which is a perfect companion for the scripts for the first two episodes,” Savela told GateWorld. “We are also in the process of cutting a more trailer-like sequence that we will release.   It’s going to be very cool, very dynamic.  I think it will really show the tone and style of the show.

“We also have a lot of behind-the-scenes interviews with the cast and crew that we are cutting together.  It really shows how people got involved with the project and how much they believe in it and their commitment.  So, we do have a lot of material so far. We just can’t wait for people to see it.”

Savela said that he certainly learned a lot during his years on Stargate — things that he and his teammates are taking with them into this new project.

“When you work with Brad Wright, Robert Cooper, Carl Binder, John Lenic,  Joe Mallozzi and Paul Mullie for so long you learn a lot about how a great show is run,” he told us.  “It’s one of the things we really tried so hard to do, because everyone was volunteering their time, was make the shoot fun and have it be well run.  There was such a family atmosphere to the shoot, to the whole production in general.  Everyone walked away and said they had a really good time and really enjoyed the shoot, and that was so important to us.”

NEXT: Read our full Q&A with Mark Savela

Jennifer Spence = YES! I love her as Park.. I just hope SyFy doesn’t pick it up

Just need to air it on a channel that isn’t named “SyFy”, and i’ll watch.

Not gonna follow anything SyFy has to offer from now on, other than Eureka. After that inevitably get’s cancelled by the SyFy execs, i’m done with SyFy for good.

But… Mike Dopud in a lead role series, does sound interesting. I’ve enjoyed every appearance he’s made in Stargate (SG1, SGA and now SGU).

Lets face facts. SyFy doesn’t give a sh*t about sci-fi. However, BBC have been doing succesful sci-fi for years (Doctor Who). Come on BBC!!! Make the americans proud, like you have done with the British all these years!

Hey! I object to the statement that Australia is little fish trapped between the superpowers!!!

However, this does sound like a very cool concept :) and I hope they fire Brian K Smith because he’s a great actor. He was one of the standouts for me in SGU.

This looks pretty good. Jennifer Spence ( park ) stood out for me amongst the crowd of secondary characters in SGU. I’ll have to keep an eye out for this.

Interesting concept as well. SGU handled aliens and different civlisations very well. I’m curious to see how ‘Echoes’ would do it.

I love this idea even if SyFy picks it up I will watch it but I would rather BBC America or someone else.

Oh great, more montages of people crying in the dark.

I’m in the same boat as many others. Other than anything Battlestar or Stargate related, the last shows I watch on SyFy are Eureka, Warehouse 13 and Sanctuary.

Concept sounds interesting. Reminds me of a real-time strategy game that came out a couple years back, can’t remember the name, but it had the same story where humans were pitted in between two warring alien races. It was made by Petroglyph I think. I think this would do well on a network like TNT or AMC (airing as a lead-in/lead-out to The Walking Dead).

As an Australian I find that offensive

Sounds like Starcraft instead of it being set on earth. Terrans somehow got in between the war with Protoss and Zergs and blah blah blah :D

I’ll keep an eye out for “Echoes”. I hope it airs on a network other than SyFy.

If it is indeed supposed to be set in Australia, then the cars in the pics are all wrong. The drivers seat is on the wrong side (should be right not left side)

I would TOTALLY watch this! I hope it gets picked up!

I’m rather excited about this. Sadened that it is likely destined for SyFy who won’t give it a fair chance… and will cancel it just as it gets REALLY interesting.

This sounds interesting and I love the enthusiasm the creators are approaching it with. Don’t think anyone needs to worry it’ll be picked up by SyFy.It’s too SF for them.TNT has Spielberg’s $4 mill. per episode Falling Skies coming up,so I now they won’t be interested. But BBC,AMC,Starz…could happen.I’ll definitely be keeping an eye out for this one. I don’t know why Australians find themselves so offended by that example,if USA and China would decide to fight it out in Australia,what else could they be but collateral damage?Besides we all know that the collaterals in the middle will win in… Read more »

Maybe TNT will pick it up and pair it with Spielbergs “Falling Skies” alien invasion series – assuming it gets more than its first 10 episodes.

I agree with the anti SyFy sentiment. SyFy will probably change its name again to something like IMAGINE (playing off its Imagine Greater motto). Though I cant “imagine” I will watch any new series on SYFY again. Though Stargate suffered from some self inflicted wounds of late SyFy did what it could to help exterminate the last vestiges of the franchise.

Hrm, could be good – depends though, the alien designs in these things leave a lot to be desired and usually use overdone tropes (reptillians, insectoids, arachnids, humanoids ect) – if they can make some INTERESTING looking aliens for once and pair that with solid-story telling – then ill definitly watch.

I agree with others on it NOT being on syfy though. It would only last a season and get cancelled.

Wow, best idea for a new show I’ve heard in a long while. Although to be frank, at this stage, I’d be happy to have any new actual sci-fi show, without horrid phrases like “supernatural abilities”, “vampires”, “ghosts” or “reality TV” being mentioned.

I do particularly like the premise for the show though, aliens v. aliens rather than the usual aliens v. humans, sounds creative. What I think I always most loved about Stargate was the massive “background universe” developed throughout the series. This show sounds like it might have the opportunity to do the same.

[…] breaks. In the meantime, you can read more about Echoes in 2011 interviews with Mark Savela over at GateWorld and SciFiAndTvTalk. You can also follow Echoes on Facebook. Posted in Echoes | Tagged […]