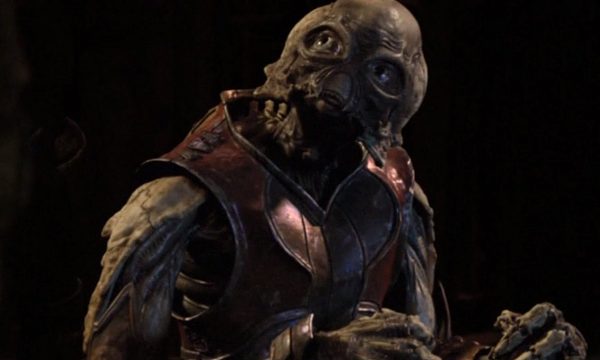 While we may not see the ''Awakening'' aliens in the November 9 episode, Destiny will encounter one of their ships.

Nominations for the 63rd Primetime Emmy Awards were announced today by the Academy of Television Arts & Sciences, and Stargate Universe has made the cut.

The show was nominated for Outstanding Special Visual Effects for a Series for the Season Two episode “Awakening.” In addition to Destiny’s encounter with an Ancient seed ship, the episode introduced the fully realized CG (computer-generated) alien race, which the crew would later learn are called the Ursini.

Competition in the category this year includes Boardwalk Empire (“Pilot”), The Borgias (“The Poisoned Chalice” / “The Assassin”), The Walking Dead (“Days Gone Bye”), and Game of Thrones (“Fire And Blood”).

Stargate SG-1‘s Beau Bridges (“Hank Landry”) also adds another Emmy nomination to his resume this year, for Outstanding Guest Actor in a Drama Series, for the role of Nick Brody in Brothers & Sisters.

Winners of this year’s Emmys will be announced in a primetime telecast September 18 on FOX.

It would be interesting to see the response if they won.

Out of every Alien on TV… The Ursini are by far the best looking!!!! I was amazed when I saw the Ursini, Stargate Universe deserves to win!!!

I only wish Universe used the Ursini more, and not made them a dying race…. Like the Ursini would be the next Asgard. Well anyway the Ursini are my favorite TV alien, and Awakening was one of my favorite episodes of all time, followed by Resurgence!!!! Great TV moments. If only Universe lived to show the Ursini one more day!

That’s… nice. But it doesn’t get me any SGU.

One of the better CGI-Aliens I’ve seen in a while, they deserve to win this one. Also finally an alien on a steady camera instead of shaky cam showing a single frame of alien in the distance while flinging left and right..

Hopefully Spyglass will look through itself and find a very good bit of television.

If SGU wins it, here’s to a hopeful revival!

If SGU loses it…well here’s to a hopeful reboot in ten years time!

Also, Beau Bridges won a nomination for best guest actor for his performance on Brothers & Sisters.

My favorite VFX were done for “The Greater Good” IMHO. Amazing shots, very realistic, in that episode.

Generally I don’t like the idea of “Rebooting” shows later on, mainly as it shows a lack of original thought, and secondly because those that grew up with the original probably won’t like the modern take on a classic.
Battlestar Galactica is a good example, also Star Trek in it’s newest movie form, in that I didn’t like either much.
I have enjoyed “Hawaii 5-0” though, not sci-fi, but a good police show nonetheless.

I honestly don’t understand the rude “yawn” comments – these are some of the same fine folks that have brought us brilliant visuals for all of the Stargate shows for years.

I would think we would all be happy for them and wish them luck.

Dead happy for them. Beau deserves award after award, Hank Landry was awesome!

The CG in SGU was utterly amazing, best I have seen in TV shows (BSG is second) by far.

I wish the best of luck to the CG team (and the others!!), they deserve to be congratulated, not ‘Yawn’ because without these people, you would still be watching The Original Series’s CG (non-existent)!

last year CSI won… CSI! if they couldnt beat CSI what hope do they have against these juggernauts???

Stargate in HD brought forth terrific VFX (especially CG), almost as good as BSG which were themselves, as good as and sometimes better than, some movie CG.

I thought the Ursini were terrible personally. Just another generic blue-skinned humanoid race – utterly cliche. I liked SGU – but it’s aliens were way too un-Alien and unimaginative lol. They should of checked out some Olaf Stapledon, Iain M Banks or HP Lovecraft books for some “good” inspiration instead IMO.

ursini and blueberry’s were too awesome for TV but i agree there shouldve been Lovecraft aliens i thought that was the point of the show when they said we were gonna get real ungodly looking aliens.

Come on guys, would you really expect to see Shoggoths or Dohl’s or even Mi-Go’s in a TV show??
Besides didthe crew of the Destiny really need thier sanity tested anymore (as much as I would find it personally satisfying to see Cthulhu or Nyarlethotep doing some chow time on the crew :P )

AbstractAlien, the Ursini weren’t “another generic blue-skinned humanoid race”, they were our little brown friends from the seed ship (see picture with this article).

I think you are getting confused with the blue fishy-aliens that captured Rush and Chloe.

But if you want to have a non-humanoid alien, the particle/sand things from “Air” and later “Water” were definitely non-humanoid. And seemingly sentient.

Beau Bridges never won an award for his best role.

And that is obviously when he smashes a car in The wizard and plays ninja turtles on NES.

…and the award went to Boardwalk Empire. Now, I love that show, but apart from the CG boardwalk backdrops (which were not exactly jaw-dropping) in what ways were the VFX oustanding? SGU or GOT or Fringe deserved it.