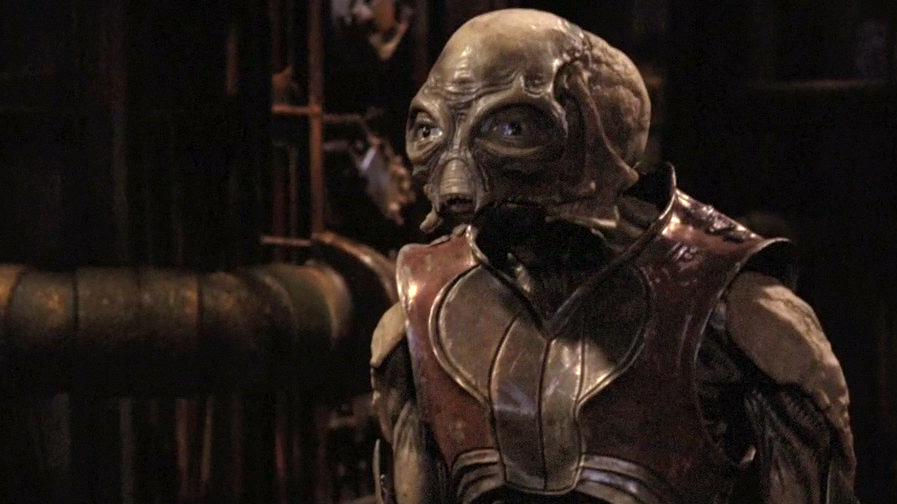 Technologically advanced species of beings who live in a galaxy far from the Milky Way Galaxy. The Ursini encountered Ancient technology when they found one of the seed ships sent ahead of Destiny, and boarded it. The Ursini are space-faring, and are engaged in an armed conflict with a fleet of drone ships.

The Ursini are bipedal but non-humanoid, standing on average approximately two meters in height. Their vocal patterns and language are very much unlike ours, making verbal communication next to impossible, for the time being. Colonel David Telford was able to communicate with them when he became stranded on the seed ship with them. He described them as curious, and not interested in harming him, but not exactly "friendly."

The seed ship was likely derelict when the Ursini found it, and a group of scientists studied the ship in the hopes that it would prove helpful in their fight against the drones. They lived on board in stasis pods, their own technology which they brought with them.

The Ursini are regarded as allies of the Destiny crew from Earth, though they proved duplicitous in towing the ship into battle to help them attack the drones' command ship, rather than to a safe place to first make repairs.

Awakening - The Destiny crew boards an Ancient seed ship found floating in space, and inadvertently wakes up the sleeping Ursini.
The Greater Good - Destiny encounters an Ursini capital ship dead in space, obviously have seen battle, and Rush and Young go aboard.
Resurgence - Having gotten the seed ship online, Telford the Ursini come to Destiny's rescue, and join forces in taking on a massive fleet of drones in the hopes of destroying their command ship.