Life after Stargate Atlantis and the character of John Sheppard continues to be good for Joe Flanigan. The actor — most recently seen in April on Syfy in the film Ferocious Planet — is in a good place, with the ability to pick and choose the projects he wants to do based on their merits while also spending more time with his family.

GateWorld had the chance to sit down with the actor for a period and chat with him about all things Joe during his time on the Creation Entertainment Official Stargate Convention tour. And as always, he doesn’t hold back. In our time with him, Flanigan discusses some of his latest television and movie projects and fills us in on the serious injury he suffered earlier this year. 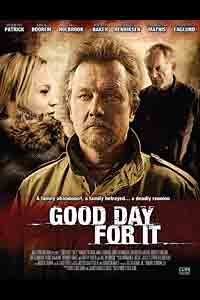 A one-sheet for Flanigan's film, "Good Day For It."

JF: I’ve been doing great! Just very happy. Living a very happy life. Happily married. Love my three little boys. I love where I live. There isn’t a day that goes by — and not to sound Pollyanna-ish — but I’m really happy. I get to grow things in my garden. Thankfully, take the work I want and not the work I don’t want.

GW: Are you actively auditioning at all?

GW: Just enjoying being a dad?

JF: Well, yes and no. I want to do another show. I just want to do the right show. And I’d either like to be part of a really interesting ensemble cast, or be the lead of a show.

GW: And with the success you had with Atlantis, it kind of affords you the ability to take your time a little bit.

JF: A little bit. I also think it’s almost a matter of respect to the fans, too. That I don’t just jump onto any other show.

You know, our industry is driven by fear a lot of times. And people will take whatever they can get. I think that’s good and bad. I don’t think you want to make choices based on fear. And so, I would like to be the lead of a show or be involved with a really talented ensemble cast. And there’s not a lot of talented ensemble casts. [Laughs]

And for the leads of shows, there’s not a lot being done like that. So we’ll see. The one thing that came across my desk that I really liked, I was fortunate enough to film that. And I filmed it over Christmas in 2009. It was a film with Hal Holbrook and, ironically, Robert Patrick.

GW: Good Day For It

GW: We’ll hold off on that for just a second … You mentioned the last time that we talked with you about a project you were writing with a partner in L.A.

GW: Has there been any movement on that? Have you gotten further?

JF: No. Well, actually, that project was very odd because I was working on a project with that guy and a couple of weeks later he said, “You know, I can’t work on this project with you any more. It’s too similar to a project that I have.” Which I thought was very weird. So he went his way, whatever, and I have yet to see his so-called project show up, so who knows what happened?  Maybe I will see it show up some place on some network. I don’t think it’s going to show up on Syfy, to my knowledge — but it is sci-fi oriented, so who knows.

GW: So, talking about Good Day For It, I was taking a look at some of the casting on that. It’s pretty impressive!

GW: Lance Henriksen … like you said, Robert Patrick. Christian Kane. He was a big part of Angel.

GW: Yeah! And an excellent musician.

JF: Great! He’s a great country-western singer. We had long talks about that.

GW: What can you tell us about it? I know it won “Best Narrative Feature” at the Sonoma Valley Film Festival. 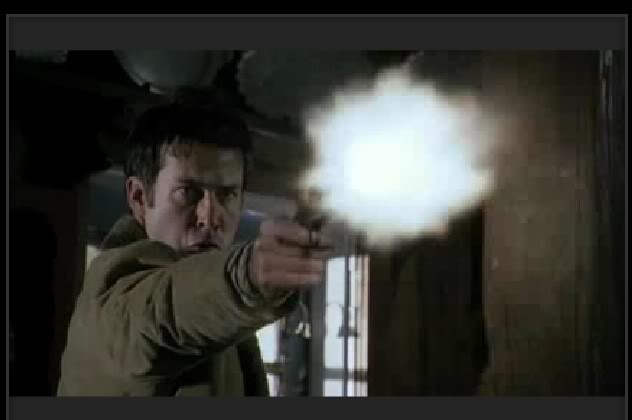 JF: Well, it’s a modern day Western. And it was definitely one of the best scripts that I had read in the last few years. I had wanted to play the lead, but I think it was a little bit of a stretch. I put a reel together for the director that I thought would work well as the lead. And it went right down to the wire. But the truth is Robert Patrick was a better choice for the lead of that film. And he’s a very different character. He’s got more age and experience that he’s bringing to the character. Which gives greater believability and everything else.

Ironically, as opposed to being upset that I didn’t get the lead, I was like, “That’s a really good choice! And in fact, I like Robert quite a bit. So I’d still like to do the film. There’s another role I find really interesting. And I found it to be one of the most interesting in the whole film. To play this sheriff who is scared. He’s actually a boy. And bad guys come into town, and he knows bad guys kill people. And this is a sheriff who has never done anything like that. He’s a small town sheriff. He goes to his café where Hal Holbrook and Kathy Baker run it, and they are his mom and dad. He lives a simple country life. And when bad guys come to town, he’s scared to death.

JF: He actually backs down a few times. He’s a real coward. And he has to go from being a coward to proving himself. And it’s a great arc. And actually, there are really no other arcs like that in the film. So I was really happy to have that role, and in some ways, it may have been better than the lead. I’ve seen a couple pieces of it and Robert’s just awesome. He’s got that steely look in those blue eyes. He’s just very convincing.

NEXT:  More on Good Day For It, plus Change of Plans, Ferocious Planet and his spring surgery

hope this guy saved his money from stargate

What a great interview, I’d been wondering what he was up to. I love how Joe tells it like it is, no holding back. And I feel like a super geek because I thought “Hey, I wonder if he gets to kill Robert Patrick again!” right before I turned the page and Chad asked the question….

Great to see Mr. Flanigan is doing well – Hope to see a lot of his work in the future.

what a classy guy!

cant believe you didnt ask him about uncharted.

I’m glad to see Joe is doing well and I hope he gets a lot of good work. Looking forward to seeing him in his future roles.
— Another Irishman named Joe

I would have driven the length of the country to buy Joe a pint if I had known he was in these parts.

I’d hate to see him turn out like Christopher Reeves!

Good attitude and an overall great guy (considering the events in the post-Stargate world for all involved.)

Permission to carry on, Joe…

Love what he is a great actor.