Happy Halloween! We’re finishing up the exciting third month of the Stargate Rewatch. You’ve voted on the very best of Stargate SG-1 Season Three, and the results are in!

In November the Rewatch project heads into Season Four of SG-1, and we’ll be taking your nominations for the best episode, character moments, and more at GateWorld Forum starting later this week.

Without further ado, here are the winners you picked for the Season Three Awards: 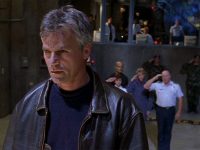 Fed Up. Jack defies orders and goes rogue, stealing alien technology … in order to flush out former N.I.D. agents working against the interests of the government.

From: “Shades of Grey” 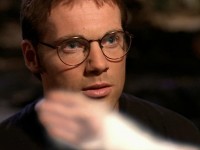 Higher Power. After convincing himself that he has extraordinary mental powers, Daniel encounters Oma Desala and realizes that she has the true power to protect Sha’re’s infant son. 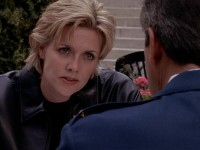 A Foothold Situation. With the S.G.C. and her commanding officers compromised by an alien incursion, Sam takes charge and leads efforts to retake the base and expose them … despite Maybourne’s idiocy. 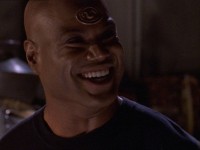 Jaffa Joke. Teal’c tells the team a Jaffa joke from back home, but the sense of humor doesn’t translate. “The Setesh guard’s nose … drips.” 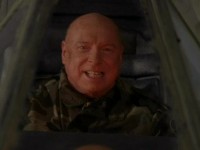 To the Rescue. “Yee-haw!” General Hammond takes out an enemy target as he and Teal’c use an old Jaffa ship to rescue SG-1 from Hathor.

From: “Into the Fire” 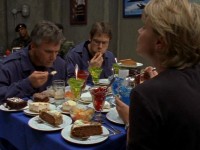 Same Old Pie? The team deals with having a curious alien entity in their heads, including increased appetites and the urge to sing “Row, Row, Row Your Boat” in rounds.

Before they evolved into humanoid form, the galaxy’s biggest, baddest villains plagued the powerful Asgard in the form of techno-bugs. They were introduced in the season finale for the very first time, leaving a creepy mark fans were not soon to forget. 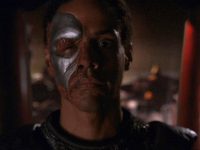 Perhaps SG-1’s greatest foe over its first five years, the powerful System Lord was dead and gone before the end of Season Two … only to rise from the grave and seize control of Sokar’s powerful fleet. You just can’t keep a bad snake down. 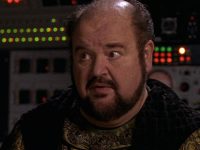 Easily one of SG-1‘s funniest and most memorable guest appearances was the great comedian Dom DeLuise, who played a computer program seeking a world of new experiences through SG-1. “Is it defibrilating now?” 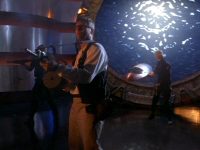 Thor is forced to introduce SG-1 to the enemy of the Asgard — a foe worse than the Goa’uld — when the Replicators attempt to gain a foothold in our galaxy. Only a carefully placed explosive device can stop the ship and save the world: “One small step for Jaffa.”

You can still join us for the Stargate Rewatch! We’re revisiting all 17 seasons of Stargate history from the beginning — one season each month, through 2012. Stay tuned to find out how to nominate your favorite episodes and character moments for November’s awards.

You guys should have a “worst episode of the season” category. Though the worst episodes of Stargate are better than most other TV that aired at the time.

@Browncoat: Which is the “worst episode” of SG-1 season 3, according to you?

You weren’t asking me But I dislike “Seth”, “Urgo”, and “Crystal Skull” the most. I would say “Seth” is probably the worst one.

I’m glad they’ve kept it positive. There are ups and downs in all shows and there are certainly episodes I don’t like, but this is a celebration of Stargate by all it’s truest fans, old and new. I prefer we keep it positive and talk about everything we love best in a show that has given us so much to love!

@hlndncr – I think I do to, actually. But I really don’t like Urgo. I was appalled Dom got all those votes… unbelieveable..

should have been an easy win for JR Bourne

How does “Forever in a Day” not even rate a nomination for anything?

Wow – I didn’t vote for the winning option in a single case! I must really have a different taste than the majority *sighs*
I am really surprised Jr Bourne didn’t win – I would have thought he would have won easily.

@Dachannien yes i agree “Forever in a Day” should have had a nomination for best goodbye moment between shar’e and daniel.

I also agree on the forever in a day nom. I think there should be write ins! lol

Look, I loved Dom in his various movies and guest shots throughout all those years… and his boys have done a great job in keeping all things Stargate humming along at its best, as well.

But… “Urgo”? I hate that character (and the episode named after him) worse than I hate Lucius Lavin– and that’s *real* hate.