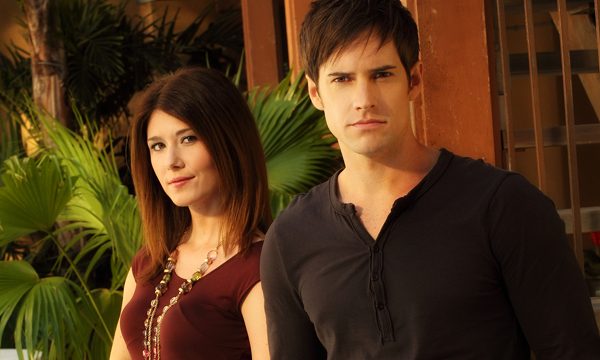 Jewel Staite and Jonathan Patrick Moore in The L.A. Complex | The CW

Martin Gero (Stargate Atlantis, Bored to Death) is hard at work on his brand new series The L.A. Complex (formerly Highland Gardens), which is set to make its Canadian premiere tonight at 9 p.m. (E/P).  The show has filmed a six-episode first season for MuchMusic and CTV and could be picked up for a U.S. run on The CW, according to Deadline. [UPDATE: The CW made it official today, and will air the show in the spring.]

The series “follows the ins and outs of an apartment-style motel in L.A. which draws aspiring Canadian hopefuls looking for a place to rest their heads while they chase their Hollywood dreams,” according to CTV.

The series co-stars former Atlantis and Firefly actress Jewel Staite (“Dr. Jennifer Keller”), who plays Raquel — a former child star trying to recapture fame as an adult.  The germ of the idea for The L.A. Complex started while Gero was working as a writer and producer on Stargate Atlantis, where he and Staite became friends and stayed in touch after the show ended.

“I would call him after terrible auditions and say, ‘Oh, you have no idea what I’ve been through today,'” Staite told Postmedia News. “He’s definitely inserted a lot of that into the storylines. … The more I read [the pilot script], the more I [realized that] these are my jokes, a lot of parallels to my life and my career.”

Staite was a child actor herself, including a role on the kids’ sci-fi show Space Cases.

As a Canadian production, of course, The L.A. Complex also includes several other actors who have made appearances on Stargate. Chelan Simmons played Mara in the Atlantis episode “The Tower.” And Aaron Abrams played Kanayo in “The Hive” and “The Lost Boys.”

If you’re north of the border, catch the premiere of The L.A. Complex tonight on CTV and MuchMusic.

The show was cool and fun I really liked it right up until the end of the second episode that part made me want to Puke!!! If they keep that gay crap up i’m done with the show!!