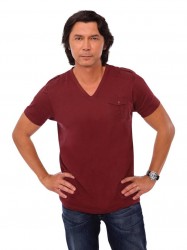 Since Stargate Universe aired its final episode earlier this year, multiple cast members of the series have found continued success on the small screen.  Brian J. Smith (“Matthew Scott”) has had a recurring role on the CW Network series Gossip Girl this season.  Robert Carlyle (“Dr. Nicholas Rush”) has lent his talents to the cast of the hit ABC genre series Once Upon A Time.  But the latest actor to join the list isn’t so much stretching his acting chops as he is his culinary ones.

It’ll be an on-screen exposure of a different sort when Lou Diamond Phillips shows the world his cooking talents beginning tonight.  Phillips — who played “Colonel David Telford” on SGU — along with a plethora of other celebrity personalities join forces and battle each other on the brand-new series Rachel vs. Guy: Celebrity Cook-Off.

The six-episode series, premiering on the cable channel Food Network, is hosted by established food personalities Rachael Ray and Guy Fieri.  After choosing their celebrity teammates, the duo will battle each other weekly in intense cooking challenges throughout the series’ run.  And — just like any other reality series competition — the losing team of each challenge will be forced to send one of their own home.  The last celebrity remaining will win a cash donation to their favorite charity, with Phillips choosing the charity No Kid Hungry.

Always a food-lover but not always one to dedicate time to the preperation of it, Phillips recently talked with Zap2It about the differences in his kitchen technique before filming of the series began this summer — and after.

“[Before], I used the stuff from the can to make sloppy joes,” Phillips said.  “[Now], the can is gone!  My new secret weapon is homade Wild Turkey Bourbon barbecue sauce!  Yeah, it’s good!”  The actor also stated he plans to teach his four daughters how to cook.

(Thanks to Rachel for the tip!)

Sorry not for me, im not into “reality tv”.

Lou Diamond Phillips is a fighter. He’ll kick butt and have a blast doing it. I wish all the competitors well. Semper Fi

I might just watch to see what Lou Diamond Phillips does… Beyond that I have no interest.