“I’m gonna miss you guys.” Happy 2012! We’re ringing in the new year at GateWorld with the wrap-up of Month 5 of the Stargate Rewatch — a 17-month worldwide fandom event where we rewatch the entire history of Stargate.

Stay tuned this week as we kick off Season Six in January, including details on how you can nominate your favorites for the January awards.

Guns Blazing! Jack single-handedly takes down a squadron of Jaffa while protecting Lt. Tyler, a supposed member of his team, even after the man has revealed himself to be an alien.

From: “The Fifth Man”

‘Where Are You Going?’ Daniel says goodbye to Jack, ready to begin a new journey as Oma Desala helps him ascend to a higher plane of existence.

Choice Three … Sam figures out a way to save the Earth from an asteroid by riding it through a brief hyperspace jump, but explains that it means almost certain death for SG-1.

Jomo’sequ! Teal’c confronts Kytano, who is clearly not acting in the best interests of the Rebel Jaffa, and defeats him in a bloody fight for leadership … discovering in the process that Kytano is a Goa’uld.

Man of Sacrifice. Knowing that Earth is soon to be destroyed by an asteroid, General Hammond courageously stays behind rather than escaping the disaster and saving himself.

From Bad to Worse. With their ship hurtling back to their home galaxy, SG-1 battles both Apophis and a swarm of Replicators through the vessel’s corridors — reclaiming a brainwashed Teal’c in the process.

Repeating their big win in the Season Two Awards, the Asgard grab the most votes for their important role in such episodes as “Revelations” — in which SG-1 meets Heimdall and rescues Thor from the clutches of Anubis. 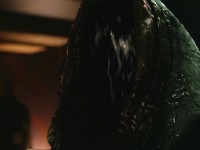 With Apophis off’ed for the final time (?!) a new enemy stepped out from behind the shadows, using his unique knowledge of advanced technology to defeat Earth’s most powerful allies and take his place at the head of the System Lords.

Having taken human form and tried to court Samantha Carter, Orlin uses household items and things ordered online to construct a small Stargate able to be used one time. (It was also a big hint that the ascended beings could be the Ancients — the original builders of the Stargates.)

Before he was a member of the Atlantis Expedition, Dr. McKay was an arrogant genius who worked for the Air Force — making a recommendation that meant certain death for Teal’c, and referring to Sam Carter as a “dumb blond.” 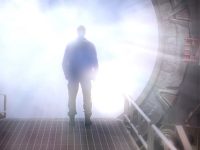 Daniel sacrifices himself to save the Kelownans from their dangerous naquadria experiment, and his friends must say goodbye as he casts off his old life and joins Oma Desala and the ascended beings.

You can still join us for the Stargate Rewatch! We’re revisiting all 17 seasons of Stargate history from the beginning — one season each month, through 2012. Stay tuned to find out how to nominate your favorite episodes and character moments for the January awards.

Such a great season…..I really miss not having something new Stargate on TV.

This Season Five vote confirms it for me: I am definitely *not* in tune with the current SG fanbase as much as I once assumed.

Only a “Hammond” moment and a “Best Villian” selection was all I could win in the fans’ votes this time; even the best “Team” moment (“Failsafe” for me) I thought was a sure-thing to win this go ’round…

I am not participating as much as i wanted but a agree with every single choice for this season. One nomenee for a bast jack momment could have been the moment when he asks Janet to let Daniel go, in Meridian.

Wow, David H looks so young in that picture!

I really thought this year was more of the same. But you know what? More was better. :)