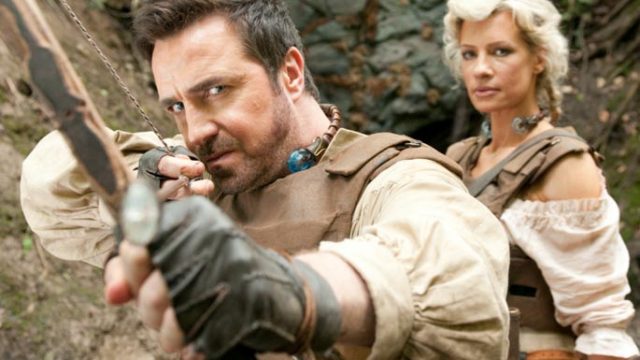 McGillion plays the fairy tale character Hansel, who as an adult returns to the forest to avenge the death of his sister — but finds a disturbing surprise: his sister Gretl, who he believed was dead, has become the witch’s protégé. (Click on the photo above for a better look at McGillion’s character.)

McGillion recently appeared in the pilot episode of FOX’s new series Alcatraz, a police procedural with a sci-fi twist. He’s also set to star alongside Billy Boyd in the genre thriller A70, according to IMDb.

If I remember correctly, Syfy also beat Thor to the finish line as well, and by God I’ve never seen anything more dreadful. Dragon Wars and in the Name of the King were, in my opinion, two of the worst films of all time, but my goodness, Syfy’s Thor sought to take their crown, and it did just so. This Hansel and Gretel thing was duhhhh, but at least it wasn’t Syfy’s thor, so at least there’s that.

Never understood why these good actors keep doing these horrible Syfy movies. Guess they need the money a lot.

Usually a film will earn you a few years rest if you want it, but these probably pay your next 2-3 mortgages and you have to make another Giant Snake vs Humungous Carp.