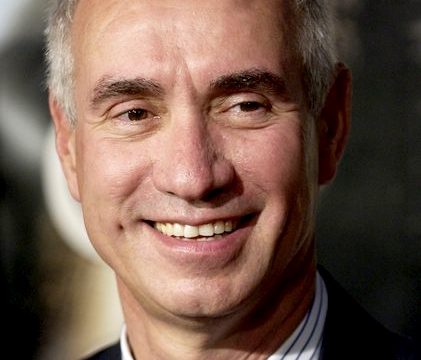 Director Roland Emmerich is one of the men responsible for the birth of Stargate back in 1994, and he’s never strayed far from the science fiction and fantasy genre — directing and/or producing such blockbusters as Independence Day, The Day After Tomorrow, and 2012 (which he also co-wrote).  Now he’s taking his film cred to the small screen.

Emmerich is executive producing the untitled project as a pilot for ABC, which has had success in the fantasy realm with this season’s new hit Once Upon A Time.  Emmerich’s series looks to have some heavy supernatural elements, following a young astrophysics student named Carter Henderson, who is called upon to fight the forces of darkness and learns that “his destiny lies not in science but somewhere between heaven and hell.”

The pilot is set in New York City against the backdrop of the 2012 U.S. presidential election.  Actor Max Thierot (Jumper) will play the lead role.  Veteran actor Martin Landau (Space: 1999) was recently cast as Mr. Armin, described as a blind, German World War II soldier who is the executor of Carter’s father’s estate and his only true friend, according to ScienceFiction.com.

Emmerich has written the pilot with Harald Kloser and will direct it, as well.

Read more at Variety.com.  If the show moves forward to series, we’ll be sure to report it here!

Why can’t gateworld cover all things science fiction? And news relevent to stargate can have a special branding.

I agree with Duneknight, Darren. While I’m sure there will be people who say “OMG, Gateworld should only cover Stargate news” You’ve already been covering non-Stargate shows like Once Upon a Time and Sanctuary due to Stargate actors involvement, why not expand that coverage to include shows like Fringe that needs more eyeballs on it or Doctor Who? I’m sure there’s plenty of Stargate fans, like myself, who are also looking for good non-Stargate sci-fi to watch. You could re-brand Gateworld as being your #1 stop for all Stargate and general science fiction news. Another favorite news site of mine,… Read more »

Thanks for the support, guys. After SGU went off the air it was a big decision to decide just how close to stick to Stargate-only in our news coverage. I decided to keep the site largely as it had been, for various reasons, including not knowing how long Stargate would be out of production and also knowing I’d be too busy finishing my doctoral work this year to be able to commit to broader genre coverage. In theory we could bring on more writers, but unfortunately that strategy has met with limited success over the years. (If anyone reading this… Read more »

Hey Darrn, here are links to what I was talking about in regards to Trekmovie: Sci-Fi TV http://trekmovie.com/2011/09/29/sci-fi-tv-thursday-terra-nova-fringe-chuck-the-hulk-more/ Sci-fi Movies http://trekmovie.com/2011/10/02/sci-fi-movies-sunday-the-avengers-thor-2-the-dark-knight-rises-man-of-steel-robocop-prometheus-mortal-kombat-more/ Its been a long time since they did anything like that but the site hit a bit of a slow period until Dec./Jan. when Trek news started coming fast and furious (Star Trek Online, Star Trek 2 (or 12, or whatever), new comics, etc.). Gotta say though even though I’m a HUGE Trekkie I’m a little jealous at all the attention Trek is getting right now (even with no TV shows in production) and I hope that at some… Read more »

I have to agree with both @Duneknight and @Browncoat1984 here. Perhaps, in the future you may want to reconsider expanding your coverage.

Furthermore, I would like to volunteer my services as a writer since, as an engineer of many years experience, I have some experience in technical writing and would like to “expand my coverage” as well.

Anyone else out there want to put your pen (keyboard) where your mouth is? I have thrown down the gauntlet, who else would like to pick it up?

Pioneering, the gauntlet is appreciated. ;) Anyone who wants to write for GW right now can e-mail me with a little about yourself and your skills at webmaster -at- gateworld.net. I acknowledge that the desire to see GW branch out in the genre is not unanamous, however. I’ve deleted a comment here from the other side for being rude, but nevertheless I take to heart the opinion that motivates it. Any branching out that we do will be careful and delineated (e.g. a weekly round-up column). However, I reject categorically the implication that the above news story has no place… Read more »

Can we please stop calling things sci-fi that are clearly not sci-fi?

Even their official synopsis says so for crying out loud!

“his destiny lies not in science but somewhere between heaven and hell.”

Just to add my $0.02 to this: I’d be of the opinion that Gateworld should stay largely as it is, for now at least. I’ve always come to Gateworld for (sometimes loosely) Stargate-related news, and that’s the way I’d like to see it continue. Hats off to all the work put in so far. I’ve only recently registered, but I’ve been coming here for years, and it’s always been great.