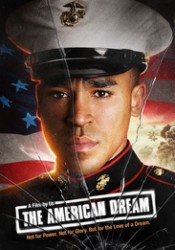 While the various Stargate series bring a sense of action, adventure and humor involving the men and women serving our country proudly, it’s not exactly the most realistic depiction of the day-to-day lives of those who would sacrifice all to protect our freedoms. But a new film from one of Stargate Universe‘s main cast members aims to change that.

Set just prior to President Obama’s inauguration, the film chronicles the lives of Luis (Smith) and Ronald (Malcolm Goodwin from the film American Gangster and cable network A&E’s Breakout Kings), two best friends and also newly-enlisted Marines who are just days away from shipping out for a tour in Afghanistan.  When budding filmmaker Luis decides to chronicle the events with his video camera, the footage he captures provides a poignant view of the lives of two young men whose worlds are about to change forever.  The film also boasts the participation of fellow Stargate Universe cast members Ming-Na (“Camille Wray”) and Louis Ferriera (“Colonel Everett Young”) in two key sequences.

The film is unrated, and is most likely not going to be considered family-friendly by most as it does contain violence and very strong language throughout.

Take a look at the trailer below for a look at Smith’s cinematic vision.  The film will be available on DVD nationwide at Wal-Mart and also through Little Plow Film’s Web site.  You can also download the film digitally via iTunes.  Or, you can get the film at Amazon and support GateWorld with your purchase!

I remember watching the trailer for Prometheus and thinking WOW, I have to watch this.
This trailer had the exact opposite affect on me…

I think the movie is extremely well done, from the writing to the editing to the photography. It’s not a world-changing subject – thousands of people go off to wars and many of them don’t come home – but it is Earth-shattering for the families and friends of the soldiers, and that’s the story the movie tells. It’s moving and hard-hitting, and a truthful look at what awaits people in wars on foreign soil. It’s one of those movies that stick with you for a long time. I highly recommend it. Congrats to Jamil for this extraordinary work: it deserved… Read more »

thats ma boy right there i knew he has some skills, what i like about his character in SGU he is so street, i mean taking the street to outer space now thats what am talking about.

Love it have fun in life,be happy and live long.