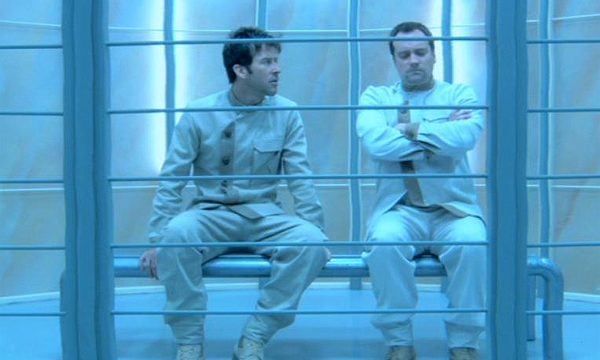 Welcome to SGA Season Two! After a year on their own in the Pegasus Galaxy, the Atlantis expedition has reestablished contact with Earth. Under siege from the relentless Wraith, the show’s sophomore season begins with the arrival of the Daedalus and a new lease on life.

Join us all through July for month 12 of the Stargate Rewatch! Yep, believe it or not, when we close out this month we’ll have reached the one year mark for our massive, worldwide community event. Click here to learn more about the Rewatch and how you can join us now.

We want to hear from you! If you are blogging about your own Rewatch, writing new fanfic, creating artwork, or doing something else related to Atlantis Season Two, e-mail us a brief description and a link.

Here’s your intro to Atlantis‘s second season, with links to everything related on GateWorld.

With the city temporarily saved from the Wraith, the team returns to exploring new worlds through the Stargate under the leadership of the newly-promoted Lt. Colonel John Sheppard. But they quickly lose one of their own when Lt. Ford, altered by his exposure to a massive dose of Wraith enzyme, goes rogue. Replacing Ford on the team is Ronon Dex (Jason Momoa), a rogue of a different kind who has been hunted by the Wraith for many years — but may now be ready to settle down and fight with Atlantis.

Season Two would bring the discovery of living Ancients, the destruction of a solar system (well, five-sixths of one), a Genii coup, and the creation of a brand new foe when the team tests a new drug that may be capable of stripping out Wraith DNA and rendering an enemy entirely human.

Come back in a couple of weeks to cast your ballot for July’s Stargate Atlantis Awards!

[…] Atlantis Season Two Rewatch which is (sort of) coinciding with my trip down SGA memory lane: Stargate Rewatch: Atlantis Season Two Join us throughout July for this month’s leg of the Star…   Rather than bull ahead at this 2-episodes-an-entry pace, I thought I’d slow it down a bit […]

When you ask for favourite episodes, could you put the two-parter episodes together; for example in the 1st season voting The Storm & The Eye should have been listed together since neither episode was complete without the other. Thank you.