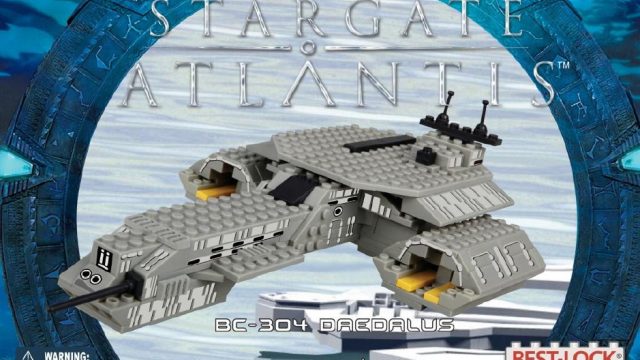 Best-Lock Construction Toys, Inc. is getting ready to send tiny plastic SG-1 teams into the world to do battle with tiny plastic Jaffa.

After eagle-eyed fans discovered the officially licensed Stargate SG-1 and Atlantis construction sets on the Sears Canada Web site (story), we contacted the company to find out their plans for the new line and whether fans would be able to get them in the U.S. and abroad. Here’s the full scoop.

Hong Kong-based Best-Lock is officially launching the line this fall with four different sets. The names and images currently on the Sears site were just preliminary, and will be replaced with these:

The largest set has over 900 pieces to build a death glider, F-302, pyramid, sphinx, Stargate, D.H.D., obelisk, and Anubis statue — plus a few Serpent Guards and a small army of S.G.C. soldiers.

Over 250 pieces to build the death glider, Anubis statue, and obelisk, plus a couple of S.G.C. soldiers.

Over 750 pieces to build a death glider, F-302, pyramid, sphinx, Stargate, and D.H.D. — plus the SG-1 team figures and a handful of Serpent Guards.

Over 230 pieces to build the BC-304 battlecruiser!

The “Battle Over Abydos” box art shows figures that are clearly modeled after the original SG-1 team, including glasses for Daniel and Teal’c’s gold forehead seal and staff weapon.

Additional sets will be unveiled at the Dallas Fall Toy Preview trade show in early October, and roll out next year.

The two larger sets retail at $39.99 each, and the smaller at $19.99. They come with instructions and are recommended for kids ages 5 and up.

The Stargate sets will be sold at Sears and Family Dollar stores in the U.S., likely expanding to other retailers next year. Family Dollar will have two, exclusive SG-1 theme sets available for the 2012 holiday season, which will show up in stores from mid- to late October. The sets will retail for $10 and contain between 230 and 250 pieces each.

The bricks are compatible with LEGO and other brands. One of the company’s distinguishing features is that, unlike LEGO, Best-Lock does military-themed sets. They even have sets licensed by the U.S. Army.

Best-Lock distributes worldwide, but it may take time before we know just which retailers will stock them in the U.K., Germany, and elsewhere (and when). Stay tuned to GateWorld for updates.

I want a Destiny one, but I suppose that things like Legos appeal mainly to little children, who wouldn’t be interested in SGU.

OH YEAH, the Destiny would be cool. I also plan on getting them all when they’re available (waiting on reply from best lock about other possible retailers that might ship to the U.S.) so kids or not, I’m committed!

love it, but there is no Family Dollar within 120 miles of me, and I can never find the good things at the sears by me

I really love it, wish they would have the Stargate separate though! So I could just get that. And ships from the other series too of course. I hope they show up in the future! :)

I hope they start selling them in UK soon!

Atlantis would be awesome too, though I suspect it might need even more pieces than Abydos.

The email I got said they won’t be shipping to NZ as so far no retailers have ordered them :( Oh I am so joining my friend in the emailing of certain national online retailers to remedy this! I need Stargate SG1 “lego” in my life.

I have an Update in an email reply I received from Alicia Hill in Merchandising – Toys for Family Dollar. She said, and I quote, “Best-Lock will start shipping the Stargate 9/2-9/8. It should be in our distribution centers between 10/21-10/27. It will take 1 to 2 weeks to get out the distributions centers to our entire chain. Our SKU# is 1021524 and the retail is $10.”

I’ll be expecting them around early to mid November (and its perfect since my birthday is Nov. 15th) Merry Early X-Mas to all!

I like LEGO, but man, those sets look cheaply made.

These sets looked WAY better in the Sears pictures.

Ahahaha, I don’t know about those Abydos SG-1 figures. I know it’s their “sand” uniforms, but the coloring so perfectly matches their skin it seems like they’re running around wearing nothing but vests.

[…] the Sears Canadian website, GateWorld has confirmed with the company, Best-Lock, that they will be releasing four sets to Canada and the US late fall 2012, just in time for your holiday wish […]

this is cool, though the Daedalus definitely looked way more detailed in the sears page. kinda hope this isn’t the FINAL design for the sets quite yet.

I hope at some point they add a Prometheus set. I loved the Prometheus.

Always good to see more Stargate even if it is only Toys this time.

I was going to buy all of these, but they don’t ship to anywhere other than Canada… so …. fail….

BTW they probably don’t make SGU ones because nobody is interested in SGU :P :P hehe

The picture you see at the top of page is indeed the version of the Daedalus being sold by Sears. The good news: Finally a new product being sold that is Stargate related. The bad news: All parts appear to be merely generic Bestlock pieces. None are actually custom made as per what the first photo of ship seemed to indicate.
Oh well, still glad there is something new to buy that is not just cards or books.

If anyone is wondering, the ship seen on the original Sears mock-ups is a fan built ship.

Anyone know if these have started appearing in US stores yet?

I really wish LEGO would make a Stargate series. Best-lock and Megablocks and whatever will never be sold in Denmark, since they infringe on LEGOs copyright.

The f302 and the death glider with stargate are out at family dollar $10 each.

Okay, so i’ve read all these comments about how Best-lock is not good at all compared to Lego. And that Lego does not have the rights to Stargate but Best-Lock does.

walked in my local Family Dollar had a F-302 on clearance for 8 bucks. I was surprised on how well they were made and the only complaint… they didn’t have any more sets. He said he just found 1 in the back LOL.